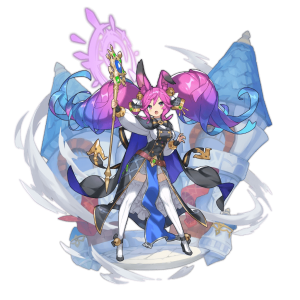 With Wand in hand and ears revealed, Cleo arrives as Shadow’s first Gala Dragalia star. The offensive and defensive support she provides is unparalleled as shown by her enormous buff zone and abundant Skill Shifts. By boosting the team’s DPS while also shelling out heavy damage, Cleo undisputedly marks her spot in the upper echelons of the Shadow roster for the foreseeable future.

Joining a shallow pool of Blind-immune adventurers, Cleo finds herself a viable pick for any Light-attuned content.

Depending on the content, Cleo may have to choose between buffing herself or her melee allies. Mobile or high pressure bosses will force the team to abandon the buff zone entirely.

Like others of her weapon class, Cleo isn’t built to take hits, though this is somewhat mitigated by her Skill Shift’s STR reduction.

Gala Cat Sith is the industry standard for her insane Skill Damage boosts.

Shinobi is the ideal pick for his immediate Energizing and titanic Skill Damage boost.

Fatalis with a huge 80% str buff is optimal for fights that only require you to shapeshift to kill.

Broken Punisher meshes well with Wands' burst playstyle. HP conditionals may be swapped with their Flurry counterparts (EX. Flash of Genius, Howling to the Heavens)

Faith of the Elders (Unlock)

Faith of the Elders (Upgrade 1)

Faith of the Elders (Upgrade 2)