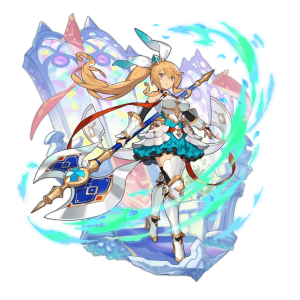 Gala Elisanne takes up the mantle of Grand Paladyn and Gala Dragalia’s first Water adventurer. In contrast to her mobile, long-range base form, Gala Elisanne trades her Lance for an Axe and gains even more support capabilities. Knockback immunity is functionally innate and allows her to complete basic attack chains uninterrupted. Although an Axe is more unwieldy than her previous Lance, Gala Elisanne's shield and Flame Res are invaluable when facing high-pressure endgame content.

Like her base form, Elisanne’s claim to fame is her potent, teamwide STR buff. In tandem with Jiang Ziya, 30 seconds of Flame Res and a %HP shield add some wiggle room when facing High Brunhilda.

Elisanne is viable in all Flame content, requiring no additional Wyrmprints to enter High Brunhilda’s Trial.

Axe users have the lowest SP gains in the game, a fact compounded by the independently charging nature of Celestial Ascent. Since Gala Elisanne no longer packs innate Buff Time, Holy Accord’s effects will be felt less than Brave Bastion’s.

Since her personal DPS doesn't matter, G!Elisanne's can also use Jagged Rainstorm for it's 50% Skill Prep.