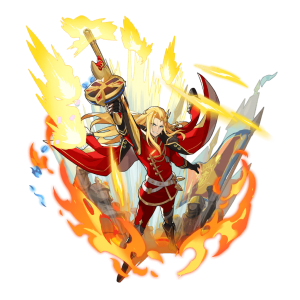 The eldest of the royal family, Gala Leonidas rains down fire as Flame’s first Manacaster user. As a rapid-fire Manacaster, Leonidas lets loose an unending barrage of bullets that breaks bosses like no other. Like his Manacaster peers, Leon introduces a new status effect that accords him additional damage without overloading on Burn.

Note: Although Leonidas always Shapeshifts into Mars, this Mars does not gain the special effects of Gala Mars, unless of course the Gala version is equipped.

Between Gauge Accelerator, Ruthless Ignition, and a torrent of bullets, Leonidas has no equal when it comes to cracking bosses wide open.

Leonidas can freely eat either of Volk’s Stun/Sleep bombs and isn’t punished for taking stray hits (unless Plagued).

Reaching Skill 2 Lv. 5 heavily discourages Shapeshifting, as doing so will consume the entire buff. This is somewhat offset by having another Shapeshift available shortly after.

Leonidas is completely stationary when firing his Force Strike, and poor positioning can lead to frequent interruptions.

Gala Mars: It should come as no surprise that these two go well together. Gala Mars’s effect is great for pushing fast Skill 2 stacks.