With Skill-Damage based DPS and support rolled into one, Halloween Elisanne pulls her weight while also helping teammates with Strength Up and Regen. Her Lance Force Strikes and the effect of Mischief Maker both charge Skills frequently, so cycling through the various buff stages of Sacred Maiden becomes easy. Her kit is only further sweetened by Gauge Accelerator, which shortens the amount of time bosses spend in Overdrive. 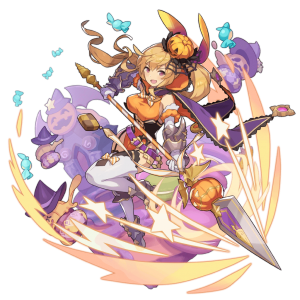 Donning a festive outfit, Elisanne’s holiday variant comes along as a premium Light Lance user. Her kit comes with all kinds of support options on top of DPS that holds its own among the team. Like many Lances, her advantages come through synergistic Skills and a balanced approach to combat. With the addition of her (adjusted) mana spirals, H!Eli gains Vampire Maiden on S2 which helps cycle through her Skill Shifts even faster.

An interesting mechanic introduced by Halloween Elisanne is the Skill Shift, which relies on chaining together her first Skill for added party-wide effects. These effects are as follows:

Thanks to the SP gain effect of Mischief Maker, recharging 2450 SP for Sacred Maiden is quite easy. High damage uptime and avoiding knockback are key to keeping this cycle going efficiently.

The Vampaladyn does a little of everything: Regen, teamwide Strength, and personal DPS. She’s a solid support/damage hybrid complimentary to most any Light team.

This can be used to the player’s advantage, but in a dynamic combat situation, being locked in place is unfavorable. Luckily, Sacred Maiden includes a backstep that fits seamlessly within the Lance combo.

Cupid boosts damage massively and comes with a support-oriented Skill to boot.

Vanilla DPS loadout for Paralysis users. RR may be replaced with Dragon and Tamer.