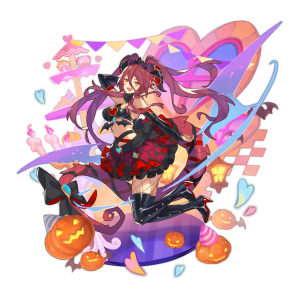 Mym sheds what was left of her armor as the star of Halloween Fantasia’s second iteration. Her debuff zone is unique to Flame adventurers, and she brings Dragalia’s second new Co-Ability since launch. However, unlike her Gala form, Halloween Mym seems to be all over the place. Her Shapeshift Abilities leave more to be desired and are shackled by needless bells and whistles. Furthermore, her SP costs are abnormally high, a fact compounded by the awful SP gains of Axe users. While she packs a fair amount of team support, Mym finds herself competing with both Emma and Ramona in their respective roles and comes up just short.

Axe users have the lowest SP gains of all weapon classes, and Mym’s Skills cost substantially more than those of Vanessa and Ramona.

Mym’s two Shapeshift-focused Abilities will rarely be seen and aren’t nearly potent enough to be justified. Mym has no need for Burn immunity as it’s not present in Wind content at all. Tying Draconic Dream’s damage modifier to Tempering Fancy’s low uptime makes Mym’s kit even more unattractive.

Konohana Sakuya boosts Charming Trick through the roof and is the preferred choice for most Flame adventurers.

Ifrit is a usable budget alternative to 5★ picks.

Axe of the Blazing King

Pair 2: The Heroes Arrive is ideal for high density content like Imperial Onslaught or Flames of Reflection. Can be replaced with %STR Wyrmprints such as United by One Vision or Bonds Between Worlds.