As a sustained Wind damage dealer, Hawk has the stats and toolkit to easily carry his weight on a team. Making the most out of his Stun Punishing Skills is tricky, but it’s an incredibly powerful status effect and will be worth the trouble against opponents who aren’t immune to it. 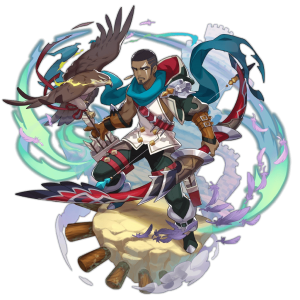 Gliding into the 5★ launch pool is Hawk, a Wind Bow user whose kit is built around inflicting Stun and Poison. Since Dragalia's launch, Hawk was the butt of every Bow meme and buff request under the sun. But with the introduction of mana spirals, the Twilight Hunter makes his triumphant zero-to-hero reversal. Toppling Joachim as Wind's premier Poison enabler, Hawk now sports a comical amount of Poisoned Punisher aspects in his kit. Hunter's Creed's new Force Strike enables the same playstyle as Nefaria, fully charging Savage Hawk and according ludicrous doublecast bursts. Combined with the removal of the HP gate on his increased affliction chances, Hawk takes a commanding position atop the Wind roster.

With essentially two Poison applications per 10,000 SP, players may choose to Force Strikes in order to maximize Poison Uptime. Each app Poison lasts for 15 seconds, so Hawk has a little under 30 seconds to charge S2 twice.

Vayu's 90% Skill Damage is prime, as over 70% of Hawk's damage stems from Savage Hawk.

Pair 1: Standard Poison enabler's bread and butter, covering most offensive bases. TFoH may be replaced with The Plaguebringer.