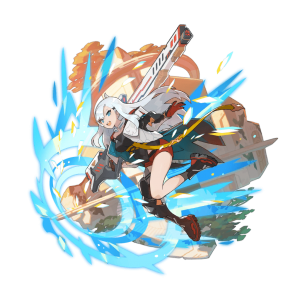 The goddess herself joins the Light roster as Dragalia’s first 5★ Manacaster adventurer. Although side gauges are nothing new, Ilia’s is fairly unique and rewards consistent damage output with massive chunks of burst damage. Ilia is also the first adventurer capable of attacking via rolling, allowing her to weave around the battlefield while effortlessly maintaining her combo count. With a new weapon, unique playstyle and bonafide religion in her name, Ilia dances among the upper tier of Light DPS.

Players who can keep up a consistent hail of fire enjoy rapid gauge filling and by extension more cartridge-enhanced burst options.

Ilia earns the status of honorary Gala unit by resisting both sides of Shadow’s afflictions and is capable of entering both types of Tartarus portals without fear.

Failing to maintain combo counts means slower gauge charging, and losing cartridges to expiration is a tragic waste. Force Strikes are also enhanced based on the number of cartridges expended, which directly correlates to how quickly a player can fill Ilia's gauge.

Only Ilia’s human form attacks count toward her gauge which may discourage Shapeshifts unless running power picks like Thor / Daikokuten.

Gala Reborn Jeanne is the industry standard whose pure power is hard to match.