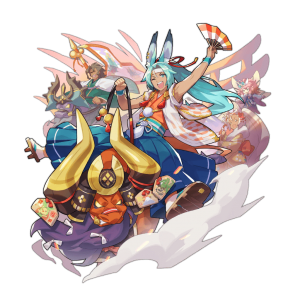 A year after his mochi-pounding home menu debut, Kimono Luca makes his appearance as a Wind Axe user. Although the two Gala Wind swordsmen offer tough competition, Luca is capable of powerful burst damage if he can find windows to attack freely. Furthermore, a high-uptime Dispel makes Luca a prime candidate for eventual Legend Ciella teams.

Luca can become especially tanky with both a regen effect and Water damage reduction. For his team, he provides Dispel and enemy STR reduction, capping at -8%

Like other Skill 1’s with extensive iframes, Splendid Spring can easily lock Luca within the range of a purple-marker attack. Luca’s prefered Force Strike spamming may be seen as clunkier than standard weapon rotations.

This ability is a bit disingenuous; while the buff sounds nice on paper when compared to standard Force Strikes, Luca’s Force Strike is already unique, and therefore could have been as fast or slow as it wanted.

Midgardsormr Zero’s combo count may be hard to maintain without a backline Lin You for Combo Time, but otherwise clocks in just behind GR Zephyr in DPS.

Flowers Under the Moon

%HP STR picks may be replaced with Brothers in Arms if running with a reliable source of DEF buffs.