High Strength, the Skill Damage Co-Ability, access to Freeze, and Burn Res make Lily a versatile ranged attacker. Getting her past High Brunhilda’s HP checks is difficult, but her presence eliminates the Co-Ability redundancies created by other team compositions. 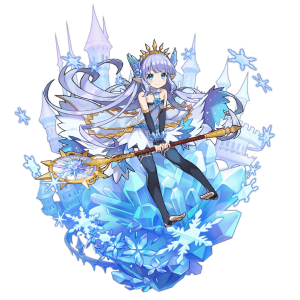 Lily is a 5★ Water Wand Adventurer with a sharp focus on offense. The Crystalian Princess packs dual AoE attack Skills, Freeze infliction, and additional offensive passives that complements her glass cannon nature. Sadly, Lily's relevance has aged like milk. Lower maintenance picks like Hunter Sarisse and Pipple dominate the ranged game, and with the Water roster shifting towards Frostbite, Lily struggles to justify a team slot, especially with her demanding HP gate.

Both skills cover a wide AOE, and with 100% Skill Prep Lily can start fights out swinging.

Lily consistently inflicts Freeze via her primary Skill, which benefits her team offensively and defensively.

Lily's two attack Skills both have fairly long cast times. Players will need to be attentive of their surroundings to avoid an early demise, especially in endgame content such as High Brunhilda's Trial.

As Lily has a Full HP = Strength +15% Ability, her performance drops after a single hit. Ranged Adventurers also have a lower defensive modifier, and Lily's HP isn't particularly noteworthy either. Players will need to be mindful of their movement and positioning.

Pair 1: This set is tailored to the opening blast of High Brunhilda's Trial. If sufficiently invested, Lily may opt for Candy Couriers over Volcanic Queen for additional DPS.

Pair 2: General purpose set for most content. Slot 2 may be replaced with any STR pick such as Jewels of the Sun or United by One Vision.