Lowen is the 4★ Staff user Wind desperately needed, and is excellent even by non-elemental standards. With Bog cleanse, Skill Prep and a Recovery Potency passive, he's focused entirely on healing and support. Although he lacks the instant regen or shield Skills of other healers, defense buffs work perfectly with other Wind Adventurers such as Aeleen and Louise. 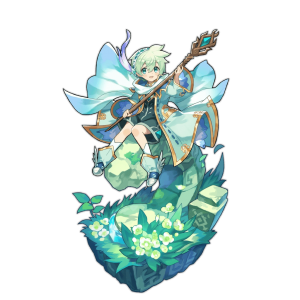 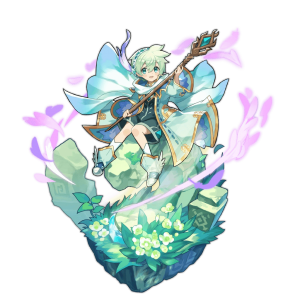 Lowen is a fun-sized 4★ Staff user and premier Wind healer equipped with several tools for success. Maxing out at 22% unconditional Recovery Potency, the Dependable Brother earns his title with burst heals and an anti-Bog kit. Though he lacks more coveted support skills such as continuous healing or shields, Lowen provides Defense buffs that mesh well with Adventurers that takes advantage of Doublebuff effects. Thanks to his stacking HP buff, Lowen is the primier defensive Wind Healer and an excellent choice for Ciella's Wrath.

Lowen's double heals both provide a substantial amount of healing and are excellent tools to keep your team healthy at all times.

Lowen's stacking HP buff allows teammates to survive all but the most deadly of attacks, and his defensive skill can be used to survive hard hits or to trigger double buff skills.

No Regen or Targeted Healing

Burst healing does not account for chip damage from multiple enemies and isn’t ideal for supporting allies who need full HP to shine. Additionally, if only one teammate is heavily damaged, Lowen’s primary heal must be “wasted” on healthy allies.

A Staff and a lack of offensive skills means Lowen is reliant on party members to take care of most enemies.

Skypainter Staff should only be used for High Mercury's Trial.

There are four Wyrmprints that are generally best for Lowen to bring, with Give Me Your Wounded generally being the best of the bunch as it offers the most pure healing increase. A Dog's Day provides both Skill Haste and Buff time, which are very helpful to Lowen. Odd Sparrows provides a small damage and regen buff thanks to Lowen's Defensive skill. If you're running with a Sylas or other Adventurer that can provide Defensive buffs, it's a bit better. From Whence He Comes offers enough skill prep to immediately allow Lowen to fire off a skill, and it also gives helpful buff time.