Being a Light Wand Adventurer, Lucretia sets a high standard for ranged Light damage and Strength boosts. Between Crescendo Chorus and Strength-Energy Doublebuff, she’ll be raising her own power constantly with some benefits spilling over to the team. 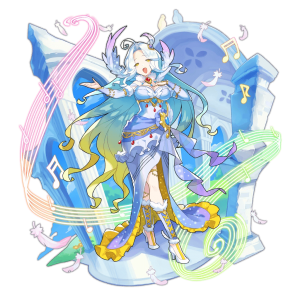 As the star of Dragalia’s Resplendent Refrain banner, Lucretia sets the gold standard for ranged Light DPS. Those familiar with Amane’s kit will quickly realize that the Songstress of the Century is superior by every metric. In addition to high damage, Lucretia introduces the Energy mechanic, taking on a secondary support role. Though the system as a whole has proven underwhelming, Lucretia sees success because Energy is merely a corollary of her Strength-boosting setlist.

Though drawn-out iframes can be a boon at times, it’s generally not a good idea to be locked in place for extended periods of time.

Like all ranged adventurers, Lucretia is more susceptible to damage than her melee allies. Where Amane had some measure of insurance by buffing HP, Lucretia enjoys no such luxury and must take care when positioning or using Empowering Triplet.

If Lucretia finds herself at Energy Level 4, any extra Energy boosts do not roll over after resetting. Therefore, Crescendo Chorus’s +2 Energy Levels must be “wasted” unless Lucretia receives support from Energy-compatible teammates.

Budget Option: The Rod of Alchemy