Maribelle is a powerful attacker complete with debuffing and multi-hit AoE Skills. She can’t always have full HP for her Skill Damage passive, but the movement flexibility of a Wand gives plenty of room to evade. 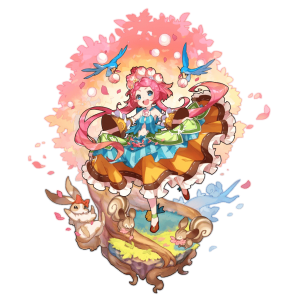 With an arsenal of two attack Skills alongside access to 100% Skill Prep and a hefty Skill Damage boost, Maribelle's resume as an Attack Adventurer is nothing short of impressive. While maintaining full HP for her Skill Damage passive is a hassle, being a ranged Adventurer makes this easier and allows her to stay out of harm's way. Having a built in Defense debuff on Save The Day is icing on the cake, and skilled players will enjoy using the Child of the Forest to wreak havoc across virtually all Water content, including High Mercury's Trial.

With two AoE attack Skills alongside a Skill Damage boost and 100% Skill Prep, Maribelle is equipped to unleash massive burst damage from the start. Save The Day also carries a Defense debuff, which allows for additional damage potential for the entire party. As a natural 5★ Adventurer, Maribelle carries a very high Strength value, allowing her to upkeep consistently high DPS as well.

As a Wand Adventurer with Bog resistance, Maribelle can safely attack from a distance while staying unhindered by Bog and its movement penalty.

Wand users generally suffer from low HP and cannot afford to take hits, which goes doubly so for Maribelle as she is required to stay at full HP to maximize her Skill Damage. Players will need to be mindful of their movement and positioning, especially in high level content.

Aside from the Wyrmprints mentioned above, alternative options for Maribelle are as follows:

Not One Step Closer! (Unlock)

Not One Step Closer! (Upgrade 1)