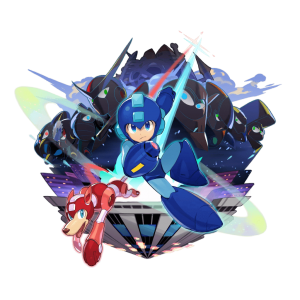 HIS SKILLS WERE UNIQUE, USING AMMO AND FILLING OVER TIME

A UNIQUE DRAGON DOG NAMED RUSH WAS AT HIS SIDE

HIS S1 COULD INFLICT BLEED, WHILE HIS S2 COULD RAPIDLY DEPLETE OVERDRIVE

THANKS TO HIS UNIQUE CO-ABILITY

SADLY, MEGA MAN IS MORE OF A NOVELTY THAN A POWERFUL HERO

All of Mega Man's kit is unique, from his unique weapon, to his slide replacing a standard roll, to his skills using an ammo mechanic. This can make his gameplay more interesting for those seeking something new.

Thanks to his co-ability and leaf shield, Mega Man can quickly shred bosses overdrive bar.

As a free adventurer, Mega Man suffers from having overall lower stats than a gatcha Adventurer. He also has what is essentially a wasted passive slot that only boosts damage against event bosses and allows him to transform into Rush, again lowering his overall ability.

While the ammo mechanic allows Mega Man to quickly stack bleed and maintain bleed stacks throughout the fight, he has no real way to capitalize on his ability to get to the break phase and his standard blaster is rather weak.

SPECIAL NOTE: MEGA MAN WILL ALWAYS USE HIS MEGA BUSTER, NO MATTER WHAT WEAPON IS EQUIPPED.

Thanks to his Mega Buster's rapid fire rate, it's pretty easy for Mega Man to benefit from flurry prints. Having a Wind Resist tacked on makes Flash of Genius even better for the squishy robot. Bubble and Wood provides more strength, and it has even more gauge accelerator.