With an offense-based kit and unique ramp-up skills, Naveed can achieve very high damage output. Even for shorter quests, his base Strength and Skill Prep allow him to jump right in and perform well at the outset, especially when carrying Doublebuff Wyrmprints. 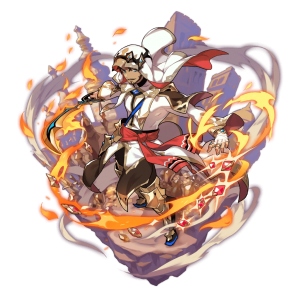 Naveed is a 5★ Flame Sword Adventurer with a focus on prolonged battles. While Radiant Bauble stacks take time to accumulate, Naveed's 100% Skill Prep and low-cost Skills ensure that he swiftly reaches maximum potential. New perks from Mana Circles grant Naveed innate Flurry Strength as well as enhanced survivability. Slayer's Strength allows Naveed to excel in wave battles as well. Although his lack of Stun immunity discourages participation in High Midgardsormr's Trial, the Suave Lithomancer is a prime candidate for the Void Zephyr battle, as well as Imperial Onslaught or any Wind Facility Event solo battle.

Packing two Skills with low SP costs alongside 100% Skill Prep, Naveed is able to spam his Skills at a consistent pace from the start.

Sleep Resist allows Naveed to excel in Imperial Onslaught (Wind) and in the Void Zephyr battle.

Due to the nature of his playstyle, Naveed requires Radiant Bauble stacks (and Slayer's Strength stacks, potentially) to be built up before he can reach his highest potential.

Swap Burning Punisher with The Cutie Competition (Scorchrent Punisher) depending on team setup. Any Doublebuff picks are good substitutes.