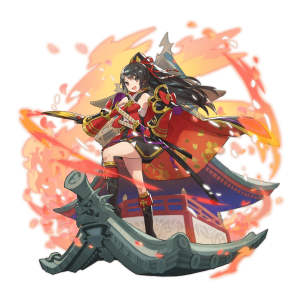 Suffering in mediocrity just after her release, Cygames decided to stealth buff Dream Offensive, rocketing her to the top of DPS charts. Aging like a fine wine, she now stands as Flame’s strongest Blade user as well as their premier dispeller. Although she can’t contribute to the Burn train like other top tier adventurers, her raw DPS and utility are important assets in the Wind endgame meta.

The addition of Combo Time as a chain Co-ability ties the rest of her abilities together. Both Flurry Strength and World’s Dream are given an extra 2.5 seconds of leeway, meaning Nobu may be knocked down and still recover in time to maintain her combos.

Both Flash of Unity and Nobu’s Force Strike are capable of dispelling Volk’s buffs, granting a measure of flexibility.

Blade users don’t stack particularly quickly, and high pressure bosses like Volk like to disappear for several moments at a time.

Gala Mars: Use him if you got him.

Arctos is a strong pick when considering Nobu’s lack of Burn.

Pair 1: General purpose DPS when an emphasis on Crit. Slot 1 may be replaced with The Wyrmclan Duo, while Slot 2 may include Beautiful Nothingness, The Queen of the Knife, or Levin's Champion.

Pair 2: Use EE when running with other Burn allies.