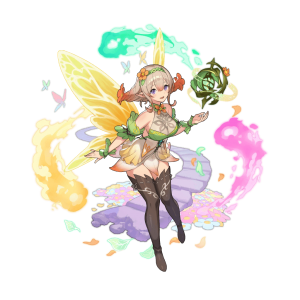 Peony flutters into Dragalia Lost as an extraordinary Light Wand user. Instead of deciding between which bonuses to give her, it seems the devs went ahead and gave her everything. Most notable are: three counts of STR buffs, two counts of attack rate boosts, and a passive, unconditional boost to all Light damage. Every Light team that doesn’t run Peony, even as a mere Co-ability mule, will lag behind in damage, showing the true extent of her influence.

Her Co-ability alone makes her a staple on all future Light teams, period. Furthermore, Curse immunity, self-enabled Paralysis Punishers, and a Life Shield make her a shoo-in for High Zodiark.

In addition to her two active skills, Peony’s Force Strike grants a smorgasbord of buffs, including unique oddities like movement speed and charging teammates’ Skill 1’s. Two counts of DEF buffs and even some Shadow Res grant her allies significant bulk.

Cygames has learned from the fiasco that was quad-Gleo and made Empowering Dreams unable to stack with itself. Standard conditions will always see a 10 second downtime between buff recasts.

Aid of the Ljósálfar I

Aid of the Ljósálfar II