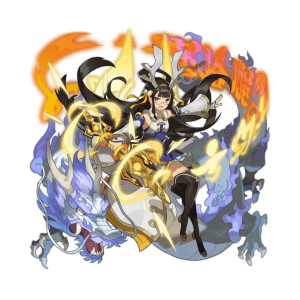 Xuan Zang rejoins the roster as a Light Wand user and a much needed ranged powerhouse. Similar to Peony, Xuan Zang balances DPS with team support to become a great fit for any team. Her unique charge gauge upgrades her standard skills and Force Strike and accords high skill uptime if allies are within reach. Most notable is her ability to reduce enemy Paralysis Res, which will prove invaluable as endgame Shadow bosses build up immunity over time.

Skill 2 fills the charge gauge based on the number of nearby teammates. If her allies are scattered for whatever reason, Xuan Zang’s support capabilities will suffer.

Lindworm is an accessible STR alternative.

Pair 1: Both are best-in-slot for a Paralysis-focused Wand user. Slot 1 may be replaced with Resounding Rendition, and Slot 2 with Beautiful Nothingness.