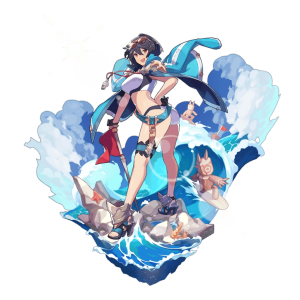 Forsaking her Blade, Summer Celliera turns heads as the co-star of A Splash of Adventure. Upon receiving her mana spirals, Celliera combines diverse supportive capabilities with significant DPS to become a top tier jack-of-all-trades. Reminiscent of Marth, Celliera’s Skill Shift scales over time, culminating in a potent 25% Attack Rate boost. Capable of self-Doublebuffing, Celliera is a prime pick for Ayaha & Otoha, especially given their susceptibility to Bog.

Just like bannermate Julietta’s, Celliera’s Skill Shift builds upon itself up to a blistering 25% jump in Attack Rate. Between Bog applications, STR boosts, and increased Buff Time, Celliera packs real support to rival the Elisannes.

Though labelled as a Support unit, Celliera has some teeth of her own and can reliably Doublebuff herself to contribute to team DPS.

Though they top the charts in damage, Sword users have neither the reach nor maneuverability enjoyed by their peers.

Gaibhne & Creidhne are crucial to cycling through Pep Talk as quickly as possible.

Siren is another self-centered pick that boosts raw damage.

Bellathorna can be replaced with His Clever Brother if running with Frostbite support.