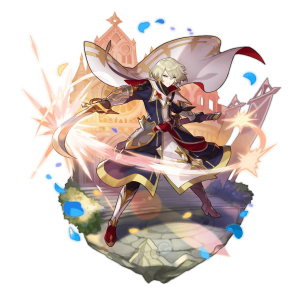 Tobias is the flagship of Paragons of Piety and turns conventional Blade perceptions on their heads. Forsaking the standard Blade Co-Ability, Tobias plays heavily into his supportive role, packing two Buff Time passives and two ways to passively charge his skills. Although most of his kit is about buffing allies, Tobias himself isn’t a complete wet noodle. Minor Poison from Revalation’s Purge synergizes with an innate Poisoned Punisher, granting a small measure of personal DPS. For these reasons, Tobias gives Noelle a run for her money and completely revamps the High Mercury meta.

Eternal Grace is both more potent and longer lasting than Noelle’s Best Regards. Furthermore, it charges faster than usual while under Sacred Blade’s influence, allowing Eternal Grace to overlap and stack with itself. As a kicker, Tobias himself provides modest DPS through Poison-enhanced basic attacks.

Tobias is the first adventurer to have Buff Time as a Co-ability, enhancing his support capabilities without boxing out other Blade users from team comps.

Tobias cannot flex to other elements like Gala Cleo can and must remain with other Wind allies.

Zephyr grants the most personal damage if ignoring support outright.

Pair 1: Maximizes Skill Haste and Buff Time. UBOV may be replaced with and %STR pick such as Jewels of the Sun or Primal Crisis.