Xainfried is a solid, balanced Adventurer with middling damage and ample Support capabilities. Dragon Frostfang and Guardian’s Fury are both excellent Skills.  Furthermore, being a native 5★ Lance means his HP Up Co-Ability is the strongest among the Water roster and essential for surviving High Brunhilda. 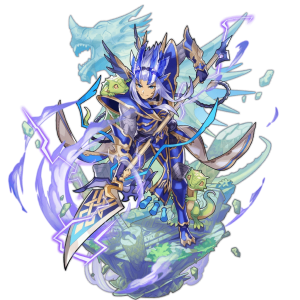 After a short reign as a staple in the earlier days of High Brunhilda's Trials, the Dragon Guardian ironically fell from grace as both Elisanne and her Gala form emerged. But like many adventurers, Xainfried has received a new lease on life via Mana Spirals which have both upgraded his old kit and given him new toys. Xainfried is now one of a select few that inflict Frostbite, and does so in a straightforward manner in contrast to the cooking duo's stances. A buffed Skill 2 also lets him keep up with dedicated supports while hitting back with his own DPS. Xainfried's chain co-ability leans even further into his Shapeshift-focused kit, and although he may never reenter the HBH meta, who can say when such a Dragon-friendly setup will be needed?

After getting bumped from 15 to 20 seconds, Guardian's Fury is second only to Gala Elisanne's Holy Accord. Lance SP gains also help to mitigate its relatively high SP costs.

Xainfried joins an elite pool of Water adventurers that inflict Frostbite. With all Water affliction chain co-abilities focused around this status, Xainfried is poised to take full advantage with his user-friendly Frostbite applications and built-in Frostbitten Punisher.

Players without Siren or Leviathan won't get the most out of Xainfried's kit. Without the extra stopping power from Dragon's Claws, players in low-Shapeshift content may simply wish to run Gala/Elisanne for their low-maintenance support.

Gaibhne & Creidhne:  Big Chungus continues to be the top performing Water Dragon for most Adventurers.

Siren is the premier pick for her enormous boost to Skill Damage.

Currently, Agito out performs HDT2 in water, but only by a narrow margin. Until the Agito gets a refine, the difference is minimal.

Pair 2: Less common setup that capitalizes on the Shapeshifting aspects of Xain's kit.