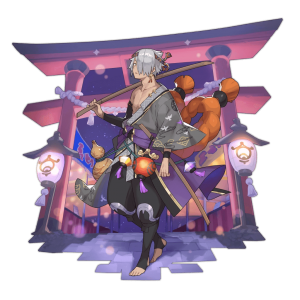 Yaten enters the fray as one of Energy’s Shadow-attuned pioneers. As a support system, Energy once again makes little noticeable impact especially since Yaten is currently the only Adventurer capable of raising team Energy levels. That being said, Yaten fully embraces Energy to reach ludicrous levels of burst damage. Should more Energy-compatible Shadow Adventurers ever be introduced, Yaten would surely become a force to be reckoned with.

When fully Energized, Yaten’s damage enters of league of its own. Capping out at a 40% STR buff, Yaten can then unleash an enhanced version of Festival Rush on top of the standard Skill boost from five Energy stacks.

Swords top the charts with superior DPS during both neutral and Overdrive states. With SP gains behind only Staffs and Lances, Yaten can quickly charge two rotations of spells to become fully Energized.

Though self-sufficient to a degree, Yaten has zero allies for Energy support, as bannermate Natalie is selfish in that regard. Since his power spikes revolve around being fully Energized, status like Blindness will bring Yaten’s scaling to a screeching halt.

If Yaten is at 4 Energy Levels, extra Energy does not roll over after resetting. Therefore, Bold Blade’s +2 Energy Levels must be “wasted” unless Yaten receives support from another Yaten.

The Shining Overlord is easily Yaten's best print. After that, it's good to focus on crit from Howling to the Heavens. Brothers in Arms and The Plaguebringer are both situational, one relying on Patia to provide Double Buff triggers, Plaguebringer on a source of poison. You can replace either of those with Flurry Strength or Crit Damage boosts if your team does not meet those criteria.