The Hunt for Harmony Event Guide 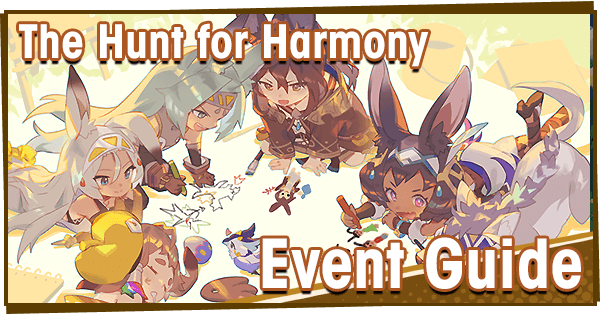 The Hunt for Harmony Facility Event

Should You Summon? The Hunt for Harmony

The Hunt for Harmony Event Guide

The Hunt for Harmony is a Facility event featuring a new story, a short series of quests, a Boss Battle, and a Challenge Battle that pits players against waves of enemies! Rewards include a new 5★ Wyrmprint, a brand new building for the Halidom, and plenty of Mana, Rupies and other goodies. Silver / Golden Keys also gain increased value following the double Wyrmprint update.

There are several story maps to be played culminating in a Boss Battle and Challenge Battle. While the regular quests are easy to clear, the Challenge Battle (particularly on Master difficulty) requires some finesse and strategy to overcome.

Obtain 4 copies of A Mother’s Love ASAP, but refrain from unbinding until each party member has a copy. Any two of the above prints can be used in tandem for extra event bonuses.

Use Getherwings primarily for Boss Battles, since Challenge Battles cannot be done in Co-Op.

Always kill the Menace. Boss Battles are quickly melted and it’s easy to ignore the mini-boss that spawns when the Ogre’s HP gets low. More loot is never bad.

Obtained from Boss/Extra Boss Battles and Challenge Battles. Exchanged in the Treasure Trade.

Obtained from Extra Boss Battles and Challenge Battles. Exchanged in the Treasure Trade.

The Dragoñata is the second Water facility after the Yuletree, boosting the HP and STR of all Water Adventurers. Those looking attempt High Brunhilda’s Trials will relish in what is essentially another Water Altar.

Available from both the Treasure Trade and as Eggsploration Rewards. Additional copies can be found as drops from Challenge Battles. The only similar Wyrmprint currently available is Lord of the Skies, and both are used to quickly break bosses from their dangerous Overdrive states.

Lily: Despite the initial cast time, the massive AOE, range, and Freeze pay for themselves.

Dragonyule Cleo: Quick-fire close-range Freeze with Skill Shift as a side bonus.

Xander: If positioned strategically, can wipe out the majority of a wave in one swoop.

The first wave is a group of Slimes in a cross formation. Hang back for a brief moment to allow them to bunch up, then plow through them all at once. Run to a corner to prepare for the next wave.

Two lines of Goblins and Gobmancers form flanks on either side. Pick a corner and finish one line at a time with Gobmancers as priority targets.

A ring of Bison and Hounds. To prevent a mess of charges and knockbacks, its best to expend some AOE or a helper skill before the enemies scatter.

A cluster of Rats and Shrooms will spawn in the center. To be on the safe side, spend a skill / helper skill to speed things up. Shroom detonations will heavily chunk teammates if left alive too long.

Start by cleaning up the four Hounds that accompany the Cyclops, as their knockback and damage will be a nuisance. As previously stated, take care not to overlap your Freezes, and never attempt to Freeze the Cyclops right before it enters Overdrive. At this time, switching to a ranged DPS adventurer will greatly improve clear rates. Rather than pop skills right away, prioritize skill usage to i-frame Red Marker attacks. This keeps as many teammates alive as possible, as even suboptimally built allies will contribute greatly to DPS.