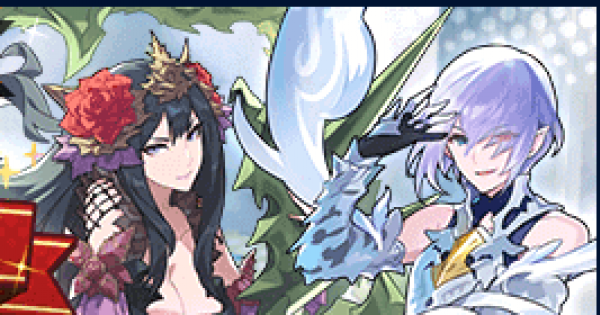 Welcome back to another Should You Summon, an article which assists you to decide as to whether you should summon for the current banner or not. Like last month, another Prize Summon Showcase has appeared, bringing along two permanent additions from the Rage of Bahamut game to the wind roster that are trying to make their name in some excellent competition. As it is with these banners, for each summon you will receive an additional prize on top of summoning a dragon or adventurer from a separate summoning pool, ranging from basic stamina supplies all the way up to a sunlight stone to unbind a dragon. Of course, the better the item quality, the rate it is to acquire from a summon, so only consider these items as additional bonuses, and not the sole focus to summoning on this banner.

I am the War God GRIIMNIIR!

For a powerful war god, he does like to spout nonsense about his deeds and power. I wonder if anything he says is even true? Either way, as long as he can smack our foes senseless I'm sure I'll put up with him.

The War God Grimnir brings an offensive oriented kit to the wind element, hoping to have what it takes to mingle with the current powerhouses present within the meta such as Gala Notte, Gala Ranzal and Humanoid Midgardsormr to name a few. To start with the basics, Grimnir has a unique standard attack combination that has a great area of effect and focuses on generating a lot of hits in a quick timeframe, approximately 20 per combo string. This is to help him generate the Brewing Storm effect, which is tied to his first ability Forbidden Power Within. Each time he generates a 100-hit combo or defeats five enemies, he is granted one stack of this effect, which will increase all sources of personal damage by 15% for 60 seconds. Each time he performs one of these conditions he will be granted another Brewing Storm stack, which can progress up to level 5. Each level grants increasing benefits up to a maximum of an 50% increase to his damage for 60 seconds. Subsequent Brewing Storm effect generation will simply reset the Level 5 timer effect.

To help ensure he can maintain his combo count during periods in which he may be unable to attack, his second ability Unceasing Cyclone extends the window for the combo counter to reset by 2 seconds. It also grants an additional effect at Brewing Storm Level 5 in which it will generate a vortex around him, dealing 1 hit of 80% wind damage approximately every 3 seconds or so. He also possesses additionally the combo time chain co-ability, which further extends the window for the combo counter to reset by 2.5 seconds. Paired up with the agito weapon skill, he has a massive 5.5 seconds of extension for his combo counter to reset. Looking at his skills then, his first skill Eternal Storm deals 1 hit of 935% and 3 hits of 312% at a relatively good SP cost of 2940, with the added benefit of applying stormlash. This skill also has an empowered variant when he attains 5 stacks of the Brewing Storm effect, in which case the skill will transform into Eternal Tempest. This version of the skill deals 8 hits of 125% and 2 hits of 500% damage, while still having the ability to apply stormlash. His skill 2 meanwhile Full Storm Tempest deals 9 hits of 300% damage to multiple targets and draws them together, though at somewhat costly 8640 SP. Both of his skill animations are relatively short though, ensuring he can get back to generating SP for subsequent skill use.

Just from this explanation you would probably presume that Grimnir has some serious offensive prowess to dish out to his enemies. However, his ability to dish out the damage is reliant on how quickly he can gain the Brewing Storm Level 5 effect. Based on usage reports it takes approximately 140 seconds, or 2 minutes and 20 seconds, for him to gain 5 stacks of Brewing Storm, assuming that he is continuously dealing damage to the enemy, and that he is granted the overdamage effect from his allies. However, if you have tried the recent Jaldaboath Sinister Dominion fight you would have noticed that numerous enemies spawn throughout the battle, allowing Grimnir to easily clean them up and gain Brewing Storm levels in a significantly quicker timeframe. The recent release Rose Queen dragon also possesses a skill which enables Grimnir to rapidly acquire his Brewing Storm level 5 effect as well, though at the cost of a weaker passive ability compared to Gala Reborn Zephyr and Midgardsormr Zero.

Either way, Grimnir has some great damage even with his slow ramp up time that, while not being able to compete against the powerhouse that is Gala Ranzal, certainly positions him as a respectable damage dealer option to use in the Legend Ciella fight. Grimnir particularly excels in the Master Jaldaboath fight, as his ability to rapidly acquire his maxed Brewing Storm effect, which is immune to Curse of Nihility, by defeating the numerous lower ranked mobs that spawn makes him an excellent choice to rival some of the top damage dealers within the wind element. However, as he does not surpass the absolute best that the wind element provides, I can only recommend summoning for Grimnir if you currently do not have a good damage option for the wind element, or your solo team currently has poor damage output to tackle endgame content.

Recommended Builds: For co-abilities, the typical strength, skill damage and wind boost co-abilities present on blade adventurers, wand adventurers and the limited adventurer Mona will serve you well in maximising his damage output. If you are missing Mona, an alternative is Lin You, who provides the Above 10 Hits = Strength chain co-ability, increasing the user’s strength by 13% when the combo count is 10 or higher. Another alternative to these two co-abilities is the standard critical rate boost provided by dagger adventurers. If you are struggling to maintain combo, you could utilise Meene as co-ability choice, as she also possesses the combo time chain co-ability. For the skill damage co-ability, Dragonyule Xainfried is the recommended choice as he possesses the Dragon Claws chain co-ability, which increases the strength of the user up to 3 times per shapeshift during a quest.

For wyrmprints, a typical damage setup will take you far in improving Grimnir’s damage output. With his consistent stormlash uptime thanks to his Skill 1, it is recommended to utilise the Sweet Surprise wyrmprint, which provides a 25% damage boost to enemies afflicted with stormlash. The Plaguebringers is also a recommended print if you are in the presence of another unit which possesses the capabilities of maintaining good poison uptime on the enemy. Besides these two prints, the standard prints that boost skill damage, strength and critical rate after a certain amount of hits, and strength when attaining a specific condition are listed as follows:

If you are in a team environment that can output a significant amount of defence buffs (such as Templar Hope), you may wish to use the following prints to attain doublebuffs from the effects. Do note these buffs will not work in Curse of Nihility environments, so switch off these prints when suitable:

The Master of Roses

A royal dragon gracing the halidom? And one who has harboured vampires? I should definitely hear some of her tales at some point, maybe even learn how she gets to look as pretty as she does. Maybe she has some sort of secret beauty technique?

The Rose Queen also comes along as a wind 5-star dragon, but unlike her fellow focus compatriot, there is not much to say when it comes to her place within the wind meta. Starting with her passives, she comes innate with the ability to boost wind adventurer’s strength by 70%. She also comes with the Slayer’s Strength passive, never seen on another dragon. This ability grants the user an 2% strength buff each time the adventurer defeats 5 enemies, up to a maximum of 5 times. For an adventurer to achieve this requirement in boss battles where there are typically not many enemies on the battlefield, she comes with the Sullen Rose skill while in dragon form. This skill deals 8 hits of 288% damage, and summon five enchanted roses, each dealing 25 hits of 50% damage for 10 seconds. After these 10 seconds the roses will wilt, at which case the adventurer can destroy them, restoring their HP with recovery potency of 10% and counts as having defeated five enemies. As such, it only requires one shapeshift to attain the maximum benefits of her passive abilities, which could also be combined with additional wyrmprints which grant effects by defeating so many enemies to further improve the benefits. However, do note that the Slayer’s Strength passive is an on-field buff, and as such does get nullified by the Curse of Nihility debuff.

Even at full strength though, her overall damage gains to the equipped adventurers fall short of the benefits provided by Midgardsormr Zero and Gala Reborn Zephyr. Outside of these two, she is somewhat competitive though with the likes of Vayu, and as such would be a decent option for a third damage adventurer on your solo team, assuming you have Gala Reborn Zephyr and Midgardsormr. However, unlike Vayu she will probably not have access to draconic essences for several months, and as such it is a tough sell to invest into fully unbinding her. Because of these reasons, I cannot recommend summoning Rose Queen unless you do not possess either Gala Reborn Zephyr, Vayu or Midgardsormr Zero. However, if you do get her in a lucky summon in the future, and she has draconic essences available, she is not a bad investment choice for your solo team.

For the duration of the banner, you will be able to pull for free once per day. As such, I recommend holding off on summoning on this banner until the final day in case you can pull the focus units for free.

On Summoning Rates and Wyrmsigils

Final Verdict: No unless you really need a good wind damage unit

While Grimnir has some excellent damage for wind, there are already many great alternatives which you could safely use in his place for both solo and coop play teams. However, Grimnir is an excellent addition to the permanent pool for wind, particularly as a stormlash punisher enabler. Rose Queen meanwhile is a decent dragon choice for your solo team but does fall short of the might of Gala Reborn Zephyr and Midgardsormr Zero as coop choices.