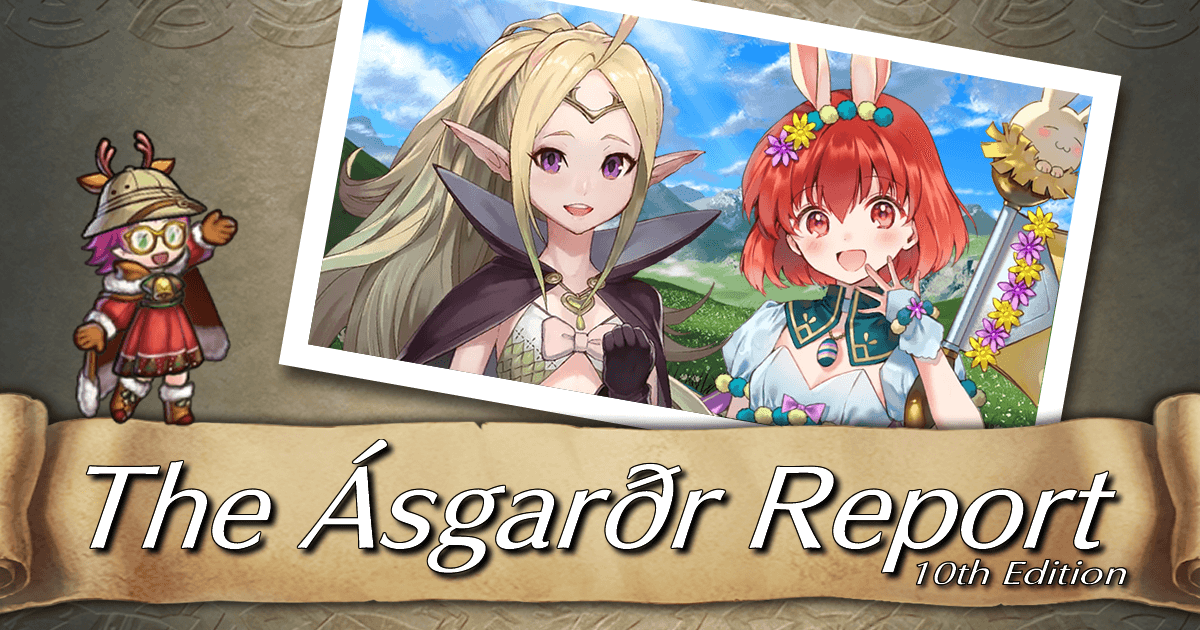 The Asgardr Report aims to provide high-level Fire Emblem Heroes content on a regular basis. Each article will contain 3-4 topics related to the end-game content of the game; Aether Raids (Offence & Defense), Arena, and Summoner Duels.

In this issue of Asgardr Report, we would be covering one of the archetypes that is increasingly competitively viable in Summoner Duels. We would also be going through some of the changes that the arena has been going through for the past year. Lastly, we would as usual cover the latest developments in Fire Emblem Heroes.

This Month in Fire Emblem Heroes

In this segment, we would focus on units or skills that the author thinks are new and going to be meta-relevant moving forward due to the updates introduced in the game. For this month, this segment would cover all the content introduced for the month.

Outside of her usual teleportation shenanigans, Fallen Lilith providing Null Follow-Up (NFU) to any ally within 3 spaces is something rather desirable. Unlike Legendary Byleth (M), Fallen Lilith’s NFU is a status effect, which has a different set of interactions compared to a Drive on Byleth. Specifically, Lilith is not disabled by skills that remove supports such as Feud and Impenetrable Dark on Bramimond, but she will be disabled by False Start even if that effect is currently relatively sparse.

Fallen Lilith is likely to see a lot of usage for players who want to use a movement type that usually does not get access to NFU. The teleportation quirk also lands Lilith to be useful in Galeforce strategies while providing an ally with NFU. Lastly, the NFU effect can be extremely useful in Summoner Duels, which will be covered in the upcoming section.

Fallen Rhea’s weapon encourages her to attack the foe, which while not necessarily a bad thing especially for Aether Raids, is in direct opposition to the current playstyle in Summoner Duels, as Save units counterattacking the foe is largely optional. Should she be allowed to counterattack though, Fallen Rhea would very likely take the foe out in a single strike even without offensive specials. This makes Fallen Rhea a great user of skills such as Hardy Fighter (for the defensive properties) or Vantage (if you can get it on the first turn from HP manipulation using Winter Bernadetta). Keep in mind that this also meant that any form of effects that block counterattacks would be a huge issue for Rhea, such as the likes of Watersweep and the leader skill Erosion.

The two skills that somewhat leveled the playing field for all movement types, the Smoke skills provide SPD-based damage reduction or follow-up negation to any unit so long as the unit attacks. Specifically for both Cavalry and Fliers, these skills provide them a way of getting effects that are not as easily available to them before. While there’s still a gap between the two weaker enemy-phase classes and the strong ones (Armored and Infantry), one could not deny that the gap has narrowed a little bit, and players who were suffering trying to use their favorites before would need to inhale a little less copium to get their units working again.

Asgardr Hall of Fame (May)

There are no updates for the month of May. Please refer to the March issue for the Hall of Fame.

With the arrival of Fallen Lilith providing NFU to any supported unit, this meant that creating a super unit is now much easier to do compared to before. This is an effect that isn’t necessarily just good for Cavalry and Fliers; Infantry could also stand to gain from this as well as they do have a plethora of other skills that are available such as Lull Atk/Spd and the SPD-based damage reductions such as Close Call and Spurn.

This is a good time to revisit the super-unit archetype in Summoner Duels; what are the usual support heroes used in this archetype, and which units are suitable as super-units.

At the end of the day, a super-unit aims to check as many boxes as possible. The whole concept is for these units to be extremely difficult to take down, and slowly encroach into enemy territory to take out their precious nukes. Any form of map-wide support is highly recommended for such strategies. This includes the likes of Legendary Eliwood with his Bonus Doubler, August with his guaranteed follow-up, and the Opening / Gap skills. While Fallen Lilith’s NFU buff is not map-wide, it is way too important against some matchups such as Valentine’s Chrom for it to be ignored.

Other than buffing allies, another way to look at things would be to debuff the enemy. Similar to Aether Raids, ATK debuff is probably the most impactful as it allows your super-unit to be even more difficult to take down. Sudden Panic is also an excellent call for super-unit strategies as it prevents the foe from using any visible buff. This is extremely useful against compositions that are not running a refresher, Harsh Command+ or Duo Alm for some stupid reason. Below are some examples of supports that you could bring in super-unit compositions. This list is not meant to be exhaustive.

The cop-out answer would be to use your absolute favorites. There will be times when your favorite unit could shut out a whole bunch of meta threats, such as using Henry to specifically shut down Yuri and Spring Sonya. However, there are of course units that are better in this role compared to other units, so let’s break things down bit by bit.

The choice of super-unit is largely dependent on the common meta threats frequently seen in the mode. As of the time of writing, the four most common nukes are Yuri, Valentine’s Chrom, Spring Sonya, and New Year Dagr. This meant that so long as you have an answer to these common nukes, it is likely for your strategy to have a higher chance of succeeding. Keep in mind that the meta will sometimes shift from time to time, so it is up to the player to be able to keep up with the times and adapt to the changing landscape.

Below are some quick examples of super-units that could adapt relatively well to the meta.

In the previous coverage of arena in Asgardr Report, we covered all the Legendary units until the time of writing. Since then, it is still a priority for players to consider all the meta Legendary units in the season. One area that is not covered is the duo units that were used in the arena. This is because, in the past, there isn’t a specific set of common duo units that are used in the arena, and it can vary greatly from different matches. Since then, this is no longer true due to two reasons; A Hero Rises and the Duo Score creep. In this section, we would be covering the common Duo units that a player might encounter in the higher rungs of Arena, and try to find a solution to those problems.

Ninja Corrin and Ninja Lyn are common sights in arena due to both of them being in A Hero Rises. Due to the outrageous value on the banner, units from A Hero Rises tend to be a common sight as a merge project, and naturally, duo units that were on the banner will be common in the mode. These two units are not only in this section because they are winners, but rather they are the only Duo units that are in the banners. Should there be any more Duo units that are in the banner in the near future, it is likely for those units to share the same trait as well.

These two units are also similar in the way they threaten the foe; absolute firepower with potential quads if the opponent is not careful. Guard-based effects would block any special activations from these two units, and Deflect seal can also be used if a player is struggling to survive either of these two units. Lastly, due to the relative lack of bulk for these units, players can also run a Far Save unit that does not counter, and engage on them in the player phase.

New Year Dagr is also a common sight in Arena, albeit for a completely different reason. Dagr scores significantly higher than the other Duo units due to her personal B slot. This meant that she effectively scores similar to a 200 BST unit. Assuming that the trend of score creep continues, this meant that scoring will only be matched by the end of this year. This enticed many of the high-tier arena players to summon her. Due to the nature of the rationale though, Dagr is more often seen at the highest echelons of the arena, and chances are you will only see her when you are attempting to stay in the highest tier of the mode.

Fortunately, Dagr when controlled by AI is fairly one-dimensional. So long as your characters have the ability to nullify her bonuses, Dagr can be handled with relative ease. The same tech of using a Far Save unit that does not counter would work relatively well as well while stacking as much DEF as possible, as she cannot charge a special fast enough to do too much damage to her opponent.

Similar to Dagr, Chrom also scores as a 200 BST unit. Naturally, that meant that he sees a lot of play in the highest echelon. Unfortunately, unlike Dagr, Chrom is a pain in the rear to face against the unprepared players. This is because, unlike Dagr, Chrom actually has a way to get his special when he attacks (Time’s Pulse + To Change Fate with his weapon effect). This meant that fighting against Chrom can be extra problematic if you have an Armored unit as part of your core, which is probably extremely common due to their relatively high base stat total.

Dealing with Valentine’s Chrom is quite similar to Legendary Chrom; AI manipulation to allow for rally loops on the other units, then leverage on him overextending to deal with him in the player phase. As Chrom comes with Deadeye, it might be useful for the team to have at least 1 unit with high enough DEF to take a hit from Chrom as well, leveraging the 5 damage rule to ensure that he attacks rather than activating To Change Fate. Lastly, Null Follow-Up or Hardy Fighter (on Armors) would definitely be useful to take a hit from Chrom.

We hope you enjoy this edition of the Asgardr Report. In the next edition of Asgardr Report, we will discuss the relative impact of Medeus in the Aether Raids Defense metagame, how the maps have somewhat changed, and explore methods to deal with them moving forward. We hope to see you all again right here in Asgardr Report.