'Sup, guys. I'm back with another suggestion for a potential unit, this time breaking off from the normal suggestions and suggesting a STORY unit. Welcome to batch 3.

[WEAPON]: Breidablik (bow, unique)
Might: 14. ATK +3. Damage calculated using the lower of foe's Def or Res. Grants Special cooldown charge +1 if foe uses magic. (Only highest value applied. Does not stack.)
[SUPPORT]:
[ACTIVE]: Grand Summoner
CD: 5. Summons a random Hero unit from reserve parties to attack.
[A]: Close Counter
Enables unit to counterattack regardless of distance to attacker.
[B]: Tomebreaker (Green)
If unit's HP ≥ 50% in combat against a green tome user, unit makes a follow-up attack and foe cannot.
[C]: ATK/SPD Tactic
At start of turn, grants ATK/SPD +4 to allies within 2 spaces for 1 turn. Granted only if number of that ally's movement type on current team ≤ 2.

The player character of Fire Emblem Heroes, Kiran is seen in the opening of Book 2 as fighting alongside Anna, Alfonse, and Sharena.

Ability Reasoning:
Breidablik
Kiran’s weapon of legend. A projectile weapon described as a gun, I was advised that making it a bow instead of a tome would be more practical. Given that tye only time we see Kiran fighting is against a mage, I decided to give it the effect of Forged Felicia’s Plate instead of just dynamic damage. It *is* a legendary weapon, after all.

Grand Summoner
This active ability is really the ability I drafted Kiran around. Highlighting his role as the summoner of legend, Kiran summons an allied unit from another party to use the special ability they currently have equipped, with their stats instead of Kiran’s. He cannot summon u its from the currently deployed party, cannot summon himself if he is in another party, and can only summon units with skills that trigger in-battle. So Chrom can be summoned to use Aether, Sheena can be summoned to use Escutcheon, but Tiki can NOT be summoned to use Rising Flame.
I have a Grima with 57 ATK and Aether in my Dragon party, so if he was summoned through Grand Summoner, Kiran vanishes in a light, replaced by Grima’s model; and Grima’s Active cut-in would be displayed, before hitting the enemy with Aether at 57 ATK, before turning back into Kiran the same way. I’m still figuring out how it would work animation-wise, but that’s how it would work effect-wise. It has a cooldown of 5, regardless of who was summoned or what ability was used, so you could very well use Moonbow and still have a 5-move CD.

Close Counter
Was initially on Breidablik. As a weapon describe to resemble and function as a gun, I feel it would work in close quarters as well.

Tomebreaker (Green)
Honestly, I got this idea from the opening for Book 2, where Kiran is seen fighting head-to-head with Veronica.

ATK/SPD Tactic
The Tactic version of Rally ATK/SPD. I think it fits, given Kiran’s role as the Order of Heroes’ tactician.

(Also, to the little entourage who have taken to following me around just to “dislike” every comment I make, regardless of what is said: Hi. ? Nice to know you care enough to tail me around.) 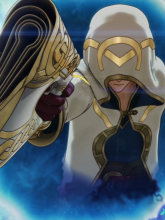 Asked by TheEternalShade3 years 4 months ago
Report
Sign in to Answer or Ask a Question!

It looks really good, but for the special, it could instead use a random special from a hero in the barracks, that way there wouldn't need to be any special animation. another thing is that maybe the weapon could be colourless, as to prevent the absolute murder that will be committed by the red heavy meta.other than that, it looks good, maybe lower the def some, as the summoner will be pretty much like a glass canon.

good as always, I can't wait to see more!
-R

The meta's not red heavy as of now. The most prominent color in the metagame as of right now is green. Look at all the good greens we've gotten recently: LA!Hector, Myrrh, Grima, etc.

Honestly, the main reason I'm trying to figure out the changing model for Grand Summoning is to avoid having Kiran speak, since they're supposed to be us. I feel like having him/her speak during a special activation would break that immersion. True, they could just leave Kiran silent. That is also an option. But maybe I'm just subconsciously trying to see what ideas I can push forward.

I’m truly glad you like it, though. ?
I do aim to please. I’ll try to keep drafting units to the highest standards for all of you.

Friend of mine suggested making Breidablik a bow. I don't see why I can't make it a magic-damage bow, it's my suggestion. XD Changed.

So, the build looks good, but I have 2 things:

First, I think his BST needs one or two extra points. Ya know, to set him above his competition, as it seems you're angling towards him being a Legendary Hero? His speed is pretty middling, maybe put the points there?

Second, I'm not too sure about Grand Summoner. At first, I though it wasn't strong enough, as it was RNG based. Then, I realized that you can set only one hero in reinforcements so you know exactly what you're getting. Now, I'm back to thinking it needs a buff. I would drop the CD to 3 or 4 to make it actually viable, because at this point, the only unit you'd want to run in reinforcements is one with Aether. Also, does it proc when an enemy attacks? Because in the examples you gave, you mentioned Sheena's Esutcheon, which wouldn't make sense to proc on the attack. This was the only major issue I had.

Overall, good build, and I look forward to the next.

I wouldn't be against him being a Legendary Hero, but that title really just refers to him being the Summoner of Legend in FEH lore. Status as a Legendary hero would be fitting, though, truth be told.

I intentionally addled his SPD, knowing that with neutral IVs, he’s sitting at a solid 55 ATK. I try to avoid making my units too overly powerful by keeping them in or near established BST values, but if more people agree that his SPD should be buffed, I’ll happily oblige.

The problem with lowering CD on Grand Summoner is that, while at 5 you can get a 5-turn CD on Moonbow, yes, but you can also get, for example, a 3-turn CD Aether. And, as you said, if all teams besides Kirans are filled with Aether, could become a bit unbalanced. Then again, it’s not all too different from Heavy Blade or Bold Fighter Aether.

And yes, it procs on Defense as well. The only limitation to activation itself is that the skill has to activate IN battle. So offensive skills like Ignis and Glacies are viable to be used through Grand Summoner, but so are Defensive skills like Pavise and Aegis. It would have to be determined upon each initiation, and activate only if possible, so no Sacred Cowl against Ike. Skills like Rising Thunder and Galeforce activate outside of battle, so they are not eligible for Summoning.

With the cooldown aspect, perhaps IS could implement something new, perhaps that you set a list of 4 or 5 units, each with a special with a different cooldown value (Slaying weapons and killer weapons could give 1 turn). This would mean that the cooldown could be safely dropped, so people couldn't abuse 3 or 4 cooldown Aethers, instead running the risk of sometimes hitting a 0 damage Glimmer, or sometimes a 80+ damage Aether. Also, when damage is calculated for the special, is it based on Kiran's stats or the summoned unit's?

I changed Breidablik. Now it is a bow and has the dynamic damage and forged effect of Felicia's Plate instead of Close Counter, which I moved to his A Slot. Now, with the Plate effect, he gains CD-1 when he engages a mage. How does that sound for an effect? Not breaking powerful activations, but still reducing the CD below its base 5 under certain conditions, like Heavy Blade. If we talk about changed they can make to the game to make this more balanced, we'll need a new thread. XD Although it would be good not worrying about insta-moonbow Reinhardt, if I understand you correctly.

The abilities triggers as if the summoned unit is attacking. Like I said, my 57 ATK Grima would be summoned to use his Aether ability with an ATK power of 57, instead of Kiran’s base 55.

Yep, I like the change, but there's one last thing: I don't think the summoned units should be random from your parties. I think you should set them, because what if you summon a unit that's not complete that you're grinding? Or a meme build?

That's always a possibility, to be sure. Just like summoning Glimmer for no damage, as you said would be possible. I don't know how well setting up a side party would work, though. As you said before, it can just be filled up with Aether to guarantee its activation, which in my opinion kind of defeats the randomness to the effect. I kind of intended it to simulate the summoning system, where we can't control the Heroes we pull. Of course, for this purpose, I gave a small degree of control. My initial idea was to summon any random unit in the barracks, but decided against that specifically because of untrained or fodder units.

Oh, now that you pointed that out, I see where you were coming from. Yep, it's RNG based, just like summoning is. I like the build! I feel like it would turn newer players off, because Heroes is typically predictable and easy to manipulate, but I feel like older players (myself included) would get a kick out of his combat effectiveness being based on RNG.

I'm glad you like it. I do see where you're coming from with the ideas for his ability, I don't want to make it seem like I'm dismissing them, but I also don't want to make it too easy to manipulate. Like you said, the game really doesn't have too much of a challenge once you figure out the tricks, and I feel like, even if just Kiran does it, a little more randomness would make things a bit more interesting, given how he seemingly has no control over who Breidablik summons.

I also thought of this and used https://feh-stuff.github.io/unit-builder.html to build an example one. I simply made all his stats even because I didn't really care to distribute them. The only things I even put on him were abilities unique to him. I would have preferred to make him a colorless mage, but that decal doesn't exist. Weapon inspired from lightening breath, C skill inspired from guidance.

Weapon: Breidablik
Atk: 16
Range:2
If attacked, unit can counterattack regardless of foe’s range. Damage calculated using the lower of foe’s Def or Res.

C Skill: Summon Hero
1 ally per turn can move to a space adjacent to unit.

I was actually in the process of modifying Bfeidablik before I saw this. XD I also gave it dynamic damage, but I decided to give it the Forged Felicia's Plate effect for the CD reduction, since it's a Legendary weapon and all. Though I moved Close Counter from the weapon to the A slot to balance it out. Also, it was brought to my attention when I drafted Aversa, but Legendary ranged weapons have a MGT of 14, not 16.