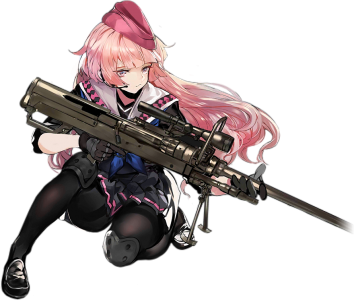 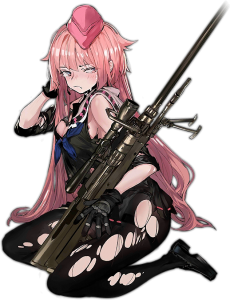 NTW-20, bearer of the highest Damage Charged Shot in the game because of her 5 star multiplier and absurdly high Damage base. That has a price however: being a traditional bamboo. Traditional bamboos are a niche RF class, NTW-20 is no exception, and with an awful RoF stat, her only saving grace is that her Damage is so high she essentially works as a 4 star RF permanently self buffing damage.

NTW-20 was the first 6 star T-Doll to be released in EN, during Continuum Turbulence. Packing a meaningful rework of her Skill 1, on top of a Skill 2 that benefits from having the highest Damage stat between all dolls and a very high starting multiplier on her Skill 1, NTW-20 goes from being a niche, retired unit, to a unit that has some interesting uses, particularly against mobs and HP-shielded enemies. She still is still somewhat a niche unit, as a 6 star Mod is very expensive, and requires a rare resource called Fire Control Core, but is a worthy unit to raise by experienced Commanders nonetheless.
She also has one of the best thighs in the game, thanks to her Mod skin. That alone is enough reason to Mod III her Commanders. Do it. In all seriousness, she wants the Mod III for her SPEQ with 10 extra FP, to cement her as the RF with the highest Damage in Girls' Frontline.

At 165 Damage stat, NTW-20 has the highest Damage stat in the game, only losing to her Mod self.

NTW-20 is the sole 5 star bamboo that has a maximum multiplier of 8x in her Charged Shot. DSR-50, the bearer of second highest FP in the game, has a multiplier of only 6x, whereas Mosin Mod has a multiplier of 6.5x. This comes at a price however: 8s cooldown, plus 7 more seconds of charging time and 1.5 second of aim time.

NTW-20 has a plethora of skins that get increasingly better the newer they are.

NTW-20 has the lowest RoF of all 5 star RFs, of 30. Even Mosin Mod and DSR-50 pull slightly ahead, having 31 RoF base stat. While the difference is small, at such a low value it is enough of a difference.

Because she is a bamboo, NTW-20 is destined to be niche. She had an early career as the chosen doll to one-shot SF bosses, but with HP scaling, it eventually became impossible to one-shot these bosses. Currently, almost all bosses are fought by ARSMG teams, or hybrid variants of it.

NTW Mod got a hefty rework on her charged shot: a reduction of one second to her ICD, bringing it to 7s, on top of a starting multiplier of 5x. For comparison, Inori M82A1, who is also a non-traditional bamboo, has an ICD of 6s with a multiplier of 4.2. Bear in mind that NTW Mod still essentially takes 8.5s to shoot her 5x nuke at enemies. Her Skill 1 also ignores enemy HP shields, which means she’s one of the few dolls in the game capable of penetrating HP shields.

NTW Mod got a much-needed RoF base stat increase, up to 32. While it still is a low RoF, it is high enough to be compensated by her Damage stat. For more details on how RoF works in GFL, check out this article.

Peaking at 170 Damage base stat, which can be further increased to 180 Damage stat with her SPEQ, NTW-20 is crowned as the owner of the highest base Damage stat among us all dolls. For comparison, R93 with her skill up has 186 Damage, while M14 Mod has 178 Damage stat. This means that NTW-20 essentially acts as a Damage self-buffer with permanent uptime.

While 32 RoF is still leagues above her premod RoF stat of 30, it still is on the low end for RFs. That means NTW-20 still needs RoF HG buffers to compensate for her low RoF.

NTW-20 excels at facing HP-shielded enemies, like Striders (Patrollers), and long fights with tons of mobs that she can one-shot to trigger her passive. However, as her Skill 2 is prone to misses from enemy evasion, and relies on her killing an enemy with her Skill 1, NTW Mod is not favoured over a traditional self-buffer in most fights.

Being the first 6 star in EN has a cost: being a 6 star. With a heavy investment required, in terms of Cores, Memory Fragments, and Fire Control Cores (FCCs), NTW Mod is completely not accessible for new Commanders, and even some Commanders on mid-game content.

As there are other 6 star units that are vastly more useful to Commanders, such as 416 Mod, Calico Mod, G11 Mod and RO Mom- I mean, mod, Neural Upgrading NTW-20 takes a backseat. Because FCCs are limited to 2 per month in the Expedition Store, and 10 per Story Event, newer Commanders may have to wait to upgrade NTW, or choose to forego a better Mod to upgrade her for waifu reasons.

Because of her absurdly low RoF, HGs that buff RoF is a must, to the point that is preferable to field 2 of them when fielding NTW-20. Thus, she absolutely loves 5-7, Calico, Astra, PPK, Stechkin. As she is a bamboo, she wants to be paired with a self-buffer, particularly RoF self buffers like WA2000, SVD, or RFs with good RoF base stat, like M14. Just be careful to not overcap the self-buffer’s RoF.

As she only buffs the HG directly in front of her, she is best left at position 7.

As her Tile covering was improved, NTW Mod can now buff a HG on position 5 if she is positioned on Position 1. As HGs that are positioned on Position 2 are no longer unusual, she can be left in either position. Much like her premod, NTW still is in dire need of RoF HG buffers like 5-7, Stechkin Mod, and Calico Mod. While she has a strong Damage base stat. Pairing her with Damage HG buffers is not detrimental, as it helps her one-shot enemies to trigger her passive.

The NTW-20, due to its size, usually requires two people to operate.

The NTW-20 is a South African anti-materiel rifle or large-caliber sniper rifle, developed by Denel Mechem in the 1990s intended for deployment against targets including parked aircraft, telecommunication masts, power lines, missile sites, radar installations, refineries, satellite dishes, gun emplacements, bunkers and personnel, using a range of specialized projectiles. The rifle was accepted into service with the South African National Defense Force in 1998.
Fun fact: because of the controversial actions of her Voice Actress, Kayano Ai, NTW-20 had her voice recently removed in the CN server. Kayano Ai also voiced Kar98k and StG44, both who also are now voiceless. Per usual with CN server changes, those changes were restricted to the CN server only, and did not affect the global server.

Fun fact 2: NTW’s artist, RAN, revealed regretting slightly not making her dark skinned, as she is one of the few African guns in Girls’ Frontline. Commanders got a glimpse of how dark skinned NTW would like in the form of her tanned version in the damaged Summer art.

Fun fact 3: It is revealed in NTW’s Maid skin story that dolls do, in fact, use the restroom. Commanders will never be the same after discovering that…
(Credits to Marsomir)