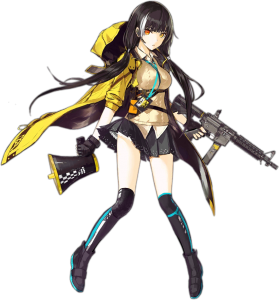 RO635 is a five-star SMG that is granted by clearing 7-6 at level 90 and 5-links and is a member of the AR Team. She relies on her amazing skill to tank that supplements her already very strong stat base, making her a very strong main tank. One of her only issues is her skill’s low uptime letting her down in longer fights, but that’s not as big of a concern for ARSMGs. Otherwise, RO635 is an extremely strong tank against both mobs and bosses alike and should be used.

RO635 Mod is a 6-star SMG mod that becomes available with the major event Dual Randomness. Wait… she’s not even using the same weapon anymore? What’s the point of the codename then?!

She boasts extra parts to her Skill 1, higher base stats, stronger tiles, an extra 10 evasion from her SOPMOD inspired special equipment, but most importantly a stupidly strong tanking Skill 2 that makes her one of the best SMG maintanks in almost any situation.

RO635 Mod’s Skill 1 gets a 10% enemy accuracy debuff on Mod 1. Combined with the rest of the skill this counts as 2 debuffs for her Skill 2, as well as lower damage taken even if it hits.

The Skill 2 applies a Seal of the Avenger (yes the same one as M4A1 Mod’s) to enemies RO635 Mod is attacking when her Skill 1 is up, also counting as a debuff.

Whenever RO635 Mod fails to dodge an attack, she will have a chance to retry dodging the attack. This “second try” is not an additional flat evasion chance like rumored, but actually comparing RO635 Mod’s evasion to their accuracy and making the proper calculations. The base chance to activate the passive is 20%, and it goes up by 10% additively for every debuff the specific enemy that she failed to dodge currently has. (E.g. RO635 is attacked by an enemy with 2 debuffs and fails to evade. She now has a 20% + 10% + 10% = 40% chance to try evading the attack again.) Keep note this is not all debuffs, but specifically the Firepower, Accuracy, Rate of Fire, Movespeed, and Seal of the Avenger debuffs.

Now for the important part. For some reason, this second chance also applies to normally sure-hit attacks such as grenades, rockets, lasers, electricity, taxes, fire, and snipes like from doppelsoldners, Jupiter cannons, typhons, minotaurs, the IRS, archers, and SWAP jaegers. Even if they are normally undodgeable, every enemy has its own accuracy stat. So RO635 Mod throws that out of the window. Obviously, she fails her first evasion check since these attacks are undodgeable. But then, if she gets to activate her passive, she does an evasion check against that enemy accuracy stat and STARTS DODGING EXPLOSIONS.

Needless to say, this is quite useful, and potentially lets RO635 Mod replace roles that force shield dolls took up, due to also being able to ignore the damage. It being passive means that RO has the distinct advantage of having constant uptime on her passive rather than the 4/16 of force shielders and lets her be relevant in late-game content when these kinds of attacks are everywhere all of the time.

Even against attacks that can normally be evaded, this is estimated to be about a 500% self-evasion buff with some added sources of debuffs. Her effective HP soars above other maintanks. Her tile buffs might not work well with certain ARs, making UMP45 Mod more effective in DPS-reliant fights, but RO635 Mod offers consistent survivability.

Pursuing a 100% chance to activate RO635 Mod’s passive (8 debuffs) is difficult and usually not recommended, but adding 2 or 3 and plenty of evasion buffs can be plenty enough to make her supremely hard to kill.

The most value RO635 Mod gets is in her second skill, so leaving it at Mod 2 is alright, but the extra 10 evasion from her Special Equipment and the extra Evasion increase at level 120 might come in handy for her, so taking her to Mod 3 is not out of the question.

But at the very least raise her. She’s good. That is all.
T-Doll Costumes
Guardian in the Rye

Damaged
Molten Moon in the Water

The bonus 70% evasion and 25% less damage taken do wonders for RO635’s ability to tank, even against enemies with good accuracy.

Given for free at level 90 and 5-linked, so most of the heavy lifting for raising her has been done for you already, making her even better than a budget option and her 5* rarity a non-issue.

Advantages of the extra frontal padding on her torso. 970 HP is decently high for SMGs and increases her effective HP, even against high accuracy enemies.

RO635’s 3 second initial cooldown is much shorter than a lot of high-survivability tank skills, letting her avoid taking significant damage early on from before the skill kicks in. This is good for close-spawning enemy formations.

RO635’s skill has a 5/12 uptime (other maintank SMGs often have 5/8). This makes her performance in long-term fights with sustained damage unideal.

RO635 Mod can avoid sure-hit attacks, widening her available team positions to include even those usually taken up by forceshielders.

The bonus 70% evasion, 25% less damage taken, and 10% less enemy accuracy do wonders for RO635 Mod’s ability to tank, even against enemies with good accuracy. It also synergizes well with her Skill 2 by counting as 2 debuffs and increasing her dodge chance.

1040 HP is very high for SMGs, and lets her Skill 2 encompass a lot of enemy attacks due to high link HP.

RO635 Mod’s 3 second initial cooldown is much shorter than a lot of high-survivability tank skills, letting her avoid taking significant damage early on from before the skill kicks in. This is good for close-spawning enemy formations.

Very few attacks actually do more than 208 damage to a single link, examples including Hydras, Golyats, and some boss attacks. But these attacks completely bypass her Skill 2, and are too much for even RO635 Mod to take face on.

Due to RO performing better in shorter fights, ARs that do not delay their DPS would work better. Also a slight preference for ARs that do not buff their own rate of fire because of her RoF tiles.

Due to RO635 Mod’s skill 2 applying Seal of the Avenger and counting it as a debuff, she has synergy with some members of Anti-Rain in their modded forms.

In order for RO635 to tank both normal attacks and unavoidable attacks well, her dodge chance can be raised higher to improve her survivability. This is usually achieved using tiles or parts of a skill. However, still, do not sacrifice DPS.

The RO635 is the most prominent variant of the Colt 9mm SMG which was based on the M16 Rifle design. Newly produced RO635s are marked as SMG 9mm NATO and used by many federal agencies of the US.