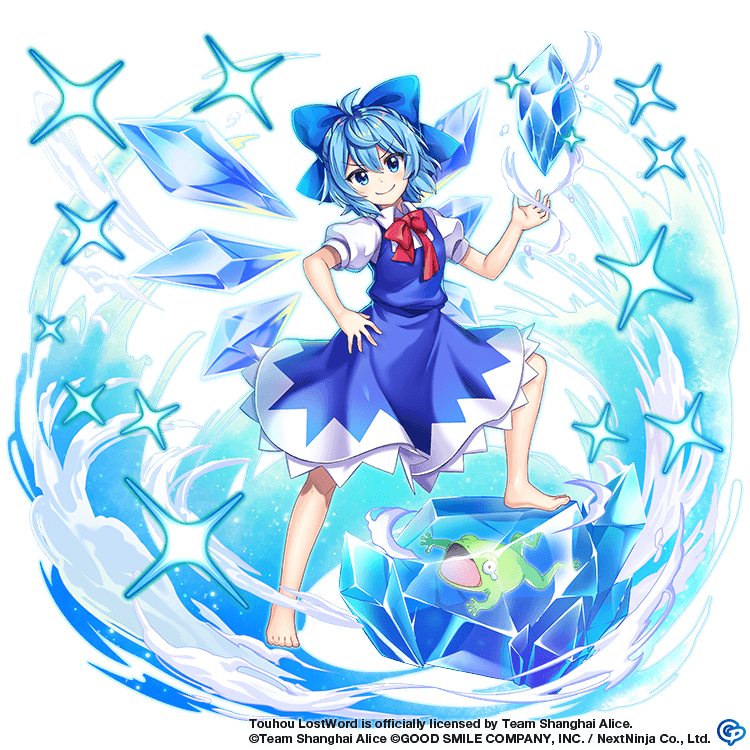 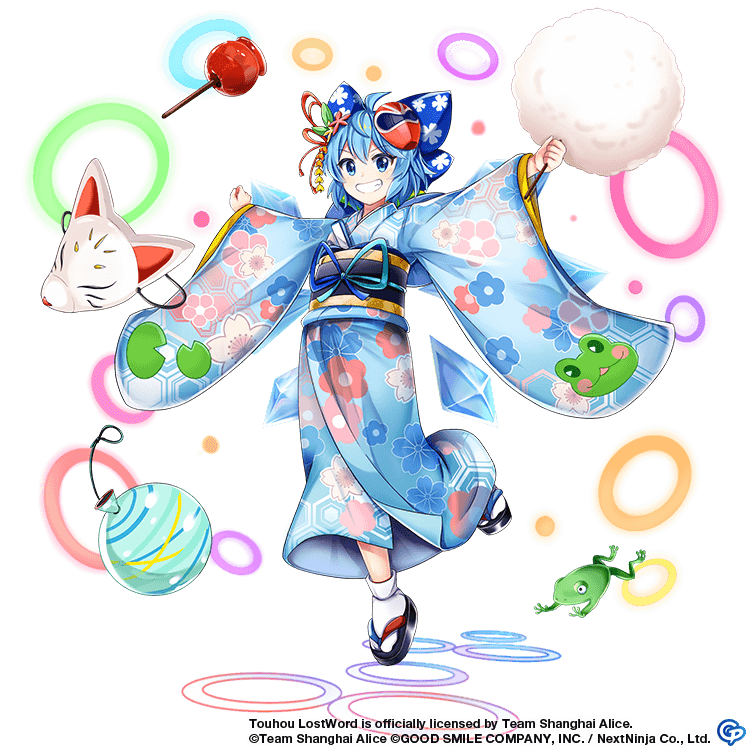 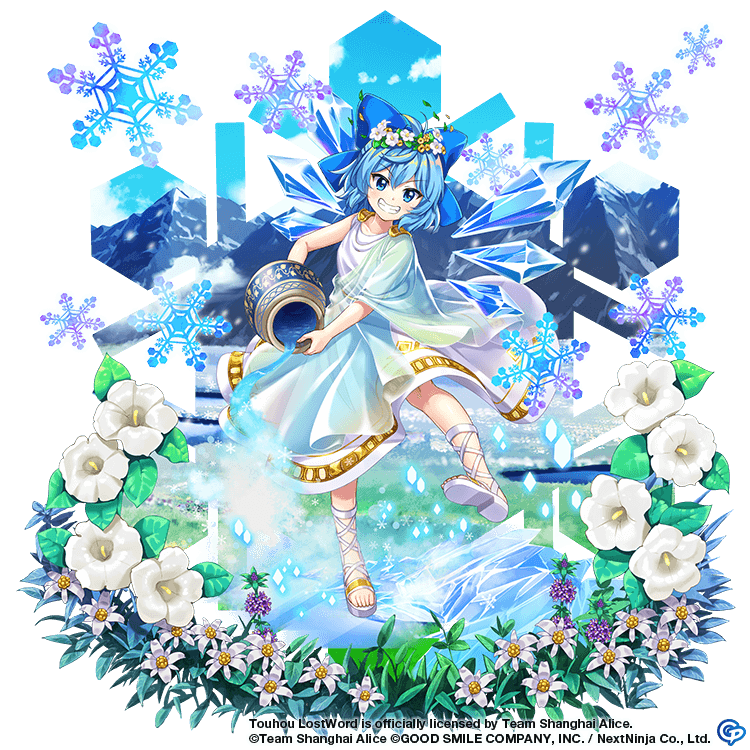 Cirno's Spread Shot. Her bullets shoot out icicles. Don't underestimate the attack just because the bullets are made of ice. The frozen water is as hard as metal.
Freezing Lasers

Cirno's Focus Shot. It freezes anything it touches, so you definitely don't want it to hit you. It is unclear how the freezing laser works and what temperature the laser is. Knowing Cirno, it could be -100,000,000 degrees. 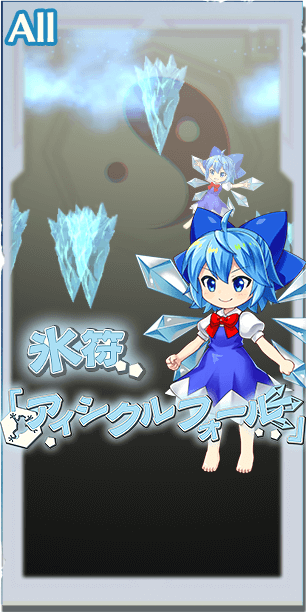 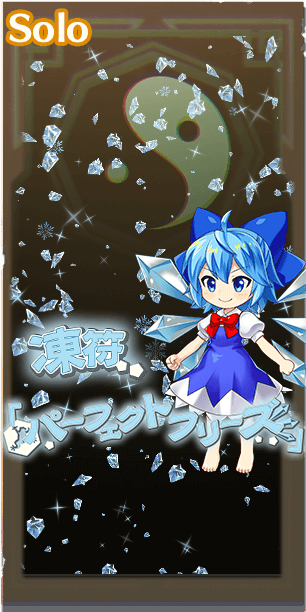 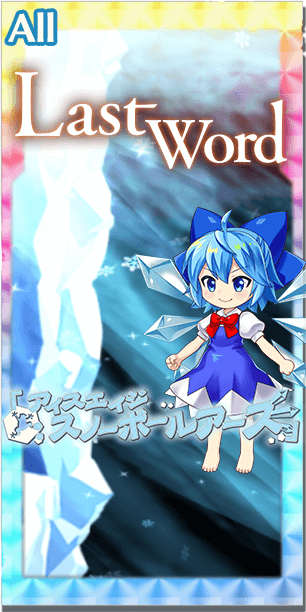 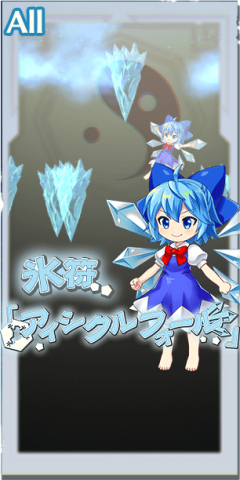 Cirno's Spell Card. This bullet attack generates a large number of icicles and lets them fall down on its target. It is a terrifying sight, to say the least. If you look closely, you can see that the icicles never fall near Cirno.
*Pre- and Post- effects assume max level. Effects per level can be viewed here.
Pre-Attack Spell Card Effects 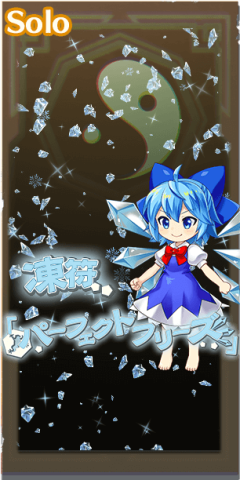 Cirno's Spell Card. After letting loose a barrage of colorful bullets, Cirno freezes them to a stop before making them move again in this elaborate attack. Anyone who underestimates Cirno for being a mere fairy will regret it―in spades.
*Pre- and Post- effects assume max level. Effects per level can be viewed here.
Pre-Attack Spell Card Effects
None
Post-Attack Spell Card Effects
None
Ice Age - Snowball Earth 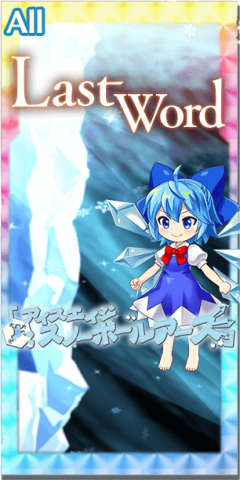 Cirno's Last Word (a Touhou LW original). Cirno puts all her power in this attack―like she plans to freeze the whole Earth―to freeze everything surrounding her. Water expands when it freezes, so the ice on both sides grows to crush the targets between them. All Cirno is doing is chilling the area around her, but that is enough for her to wreak all this damage.
*Pre- and Post- effects assume max level. Effects per level can be viewed here.
Pre-Attack Spell Card Effects
None
Post-Attack Spell Card Effects
None

For every layer of Barrier Status: Freeze, Yang ATK, Yin ATK, CRIT Accuracy 1 level UP.
When using Boost, own Agility 1 level UP (1 turn).

Cirno was released on May 11th, 2021 as part of the starting roster.

Cirno, the fairy bent on being the strongest being ever, was first introduced to us in the form of a second stage adversary in Embodiment of Scarlet Devil. Cirno is an ice fairy, and as a such, has the ability to "manipulate cold". In the games she appears in Cirno is rather childish and is convinced that she is all-powerful and everyone else around her weak in comparison, however, that is far from the truth. As per the agenda with fairies Cirno is rather weak, however, for fairies' standards, she is actually quite strong, so much so that she shocked Marisa in a fight amongst the two and forced Marisa to use a little more power than she had originally anticipated. As a fitting result to this, Cirno lands herself in B Tier.

For farming purposes, Cirno always requires at least two turns - ideally three for both Spirit Power UP and Accuracy UP. She can certainly hit hard if you can provide her the setup time she needs, complemented by Ice Sign: Icicle Fall giving her valuable Yang ATK UP. Make sure not to use Discharge when farming with Cirno - it's ultimately a net loss in damage output.

As previously stated Cirno has the potential to be a relatively potent breaker, however, this won't reliably get the job done every time. Cirno's kit is also lacking heavily in both damage and utility. While this does leave her in a niche spot for harder fights it by no means makes her bad. You just aren't able to mindlessly throw her into every fight and expect the same outcome every time. It's also worth noting that Cirno's first Spell Card 'Ice Sign: Icicle Fall' boosts Cirno's own Yang attack up by 2 levels for three turns, with a 60% chance to add another +1 Yang attack up. Using this in cohesion with her Last Word can help boost her damage by a little bit in tight scenarios as long as you don't mesh this in the same turn that you use her second skill, Discharge, which would lower the result of that damage.

In Touhou LostWord, Cirno fits into a rather unique role and can prove to be quite useful in scenarios that can use her Freeze utility. Just make sure you don't use her against Freeze immune enemies, that's a big no-no.

Here are the chances for Cirno’s secondary effects:

Cirno wants Spirit Power UP cards like Witch of Scarlet Dreams, for more bullet line access which results to higher damage potential on her Last Word. Accuracy UP cards like Valued Tools of Trade, is also another option to consider to make sure that her Last Word doesn't miss. For stat sticks, look for cards that have Yin ATK and Yang ATK stats, favoring Yang ATK.

It's worth noting that, for farming purposes, you may not want to Rank her up at all. Due to her unique ability to decrease her damage with Skill 2, which you get at Rank 2, in auto scenarios, Cirno will use this and hinder her overall output. First things first you can go ahead and max out her first skill, Widespread Freezing. For every level, this skill is a 10% chance gets added to the second Freeze which caps out at 90%. You're going to want this chance to be as high as it can be. The next two skills are both rather mediocre but some work can be done with the third skill, Flash Freezing. While it lowers Cirno's crit accuracy it could raise her already lacking damage.  Discharge, if unlocked, shouldn't be prioritized as heavily as it goes against what Cirno usually wants, which is Yang attack. If you do use this only use this on turns that you will be using Cirno's second Spell Card,  Freeze Sign: Perfect Freeze, which only composes of Yin attack.