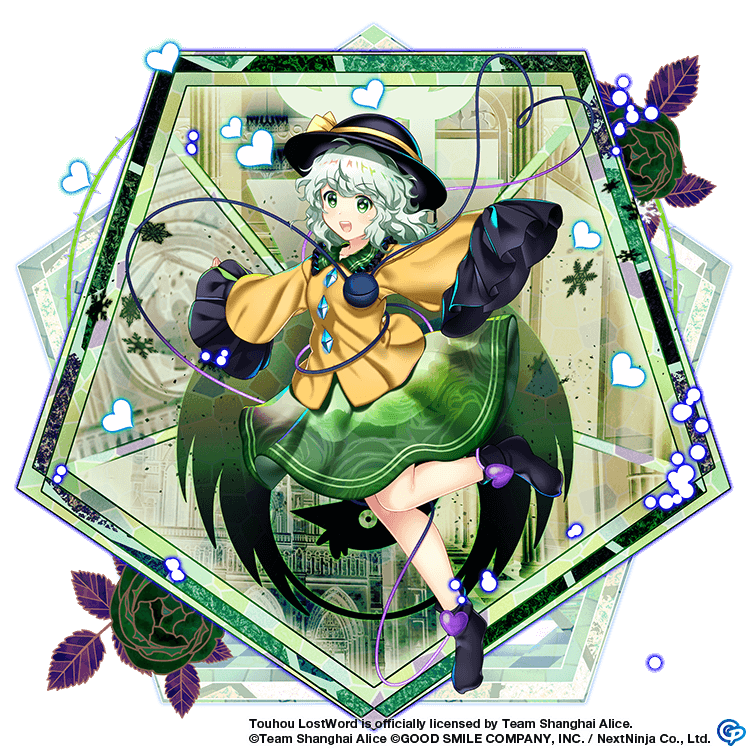 The Closed Eyes of Love (Subterranean)

The Spread Shot of Koishi Komeiji from the world of restless Underworld vengeful spirits (a Touhou LW original). She shoots bullets unconsciously. It is said that the id promotes libido to the ego. Libido is the voice of the wild that teaches humans the fundamentals required to keep living as organic beings.
Inhibition Conflict

The Focus Shot of Koishi Komeiji from the world of restless Underworld vengeful spirits (a Touhou LW original). She shoots bullets unconsciously. It is said that the super-ego promotes cultural norms to the ego. The super-ego is the voice of society that advises humans on how to coexist as social beings. 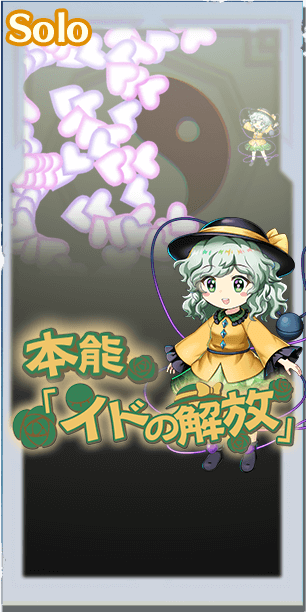 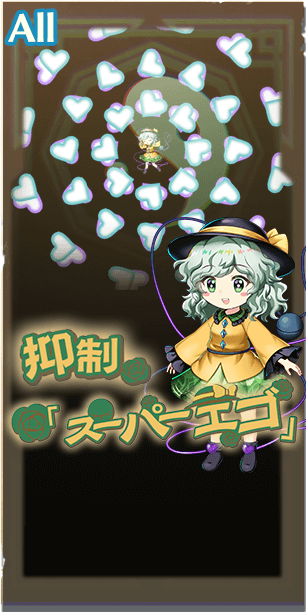 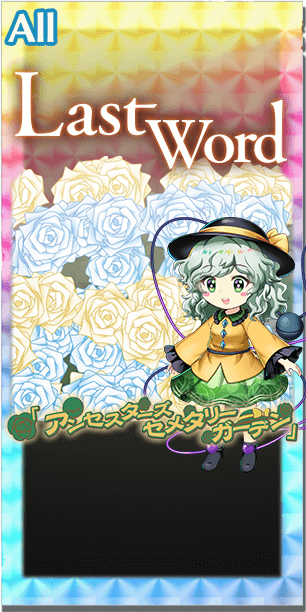 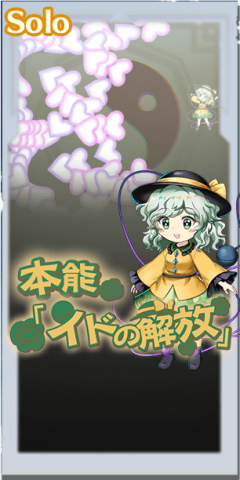 A Spell Card of Koishi Komeiji from the world of restless Underworld vengeful spirits (a Touhou LW original). She shoots bullets according to her instincts. Instincts are a principle of happiness that has continued to form since humans were still wild animals. An answer to the mystery ''Why do humans seek happiness?'' could be that ''Happiness is the feeling that indicates what humans need to do or have to live.'' In other words, happiness is the enjoyment of life and the blessings of continued life. The brain secretes ''happiness chemicals'' when these needs are fulfilled.
*Pre- and Post- effects assume max level. Effects per level can be viewed here.
Pre-Attack Spell Card Effects 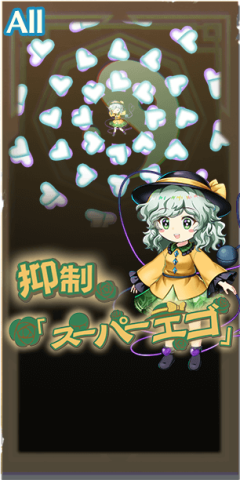 A Spell Card of Koishi Komeiji from the world of restless Underworld vengeful spirits (a Touhou LW original). She attacks by suppressing the hearts she shot out. Societal suppression is generally taught by parents and teachers. It continuously affects people for as long as they live in a society. The most significant effect of the principle called ''happiness'' is on the community as a whole, not on an individual's mind. If you want to be happy again tomorrow, it is best to ensure that your neighbors are happy today.
*Pre- and Post- effects assume max level. Effects per level can be viewed here.
Pre-Attack Spell Card Effects 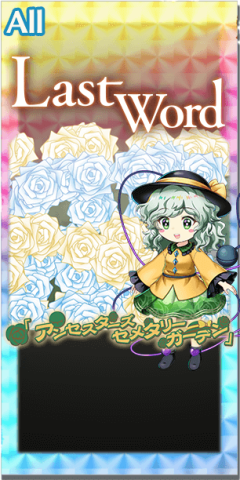 The Last Word of Koishi Komeiji from the world of restless Underworld vengeful spirits (a Touhou LW original). The legacies engraved on her brain and genes throb with pain. The ego makes decisions after listening to the id and the super-ego. The id is the whispers of the wild that are engraved onto genes, and the super-ego is the traditional slogans that are engraved onto the brain. They are both legacies passed down from ancestors who have passed away. The world of humans is a gravestone that stands upon a vast communal cemetery.
*Pre- and Post- effects assume max level. Effects per level can be viewed here.
Pre-Attack Spell Card Effects

DMG to effective elements 20% UP.
When using Graze, party's Agility 1 level UP (1 turn).
DMG from resisted elements 20% DOWN.

A11 Koishi Komeiji was released on July 22nd, 2022 in Festival: Subterranean Subconscious.

Koishi Komeiji is one of the Komeiji sisters, along with her older sister, Satori Komeiji. They live together in the Former Hell deep under Gensokyo, in the Palace of the Earth Spirits, along with their large selection of pets, including Rin Kaenbyou and Utsuho (Okuu) Reiuji. In the events of Touhou 11, Subterranean Animism, Koishi follows around the incident resolvers for most of the time, but goes entirely unnoticed due to her ability to "manipulate the unconscious mind", which can involve messing with people's senses' ability to percieve her, among many other effects. Only when the incident resolvers make their way up to Moriya Shrine does Koishi become noticed, in which she actively provokes a fight (and then promptly loses).

Koishi Komeiji (Subterranean) is a high level Yin attacker with above average modern-day Festival Friend level of Element density, which is spread equally across Fire and Water. On top of that, her Spell Cards are mostly frontloaded (3-1-1), so her element breaks and damage are low cost and fast to get out as far as Spirit P goes. This also makes her 1 turn damage quite high, but her potential damage ceiling can only be very effectively hit with lots of Yin ATK and Speed support.

As for high level content, Koishi will definitely shine on Yin focused teams and do a whole lot of damage so long as she gets those buffs from her teammates, as lots of her Spell Cards have Sure-Hit bullet lines, and the base accuracy for those without Sure-Hit is quite good too. And to add to her regular element breaks, Koishi can also apply 2 layers of Freeze with Suppression: Super-Ego, and then also has Thawing on her Focus Shot at 1P for just a little more breaking capability. She also has Incineration on her Spread Shot 1P, although she doesn't inflict any Burn.

Koishi's Skills and Spell Cards aren't anything unusual coming from a Yin attacker, but they certainly get the job done; with her absolutely massive 1880 Yin ATK, and mostly Yin Shots and Spells, she can take full advantage of the Yin buffs she provides herself, the Yin DEF down she inflicts AoE with both Suppression: Super-Ego and Ancestors' Cemetery Garden, and do excellent damage with her Spell Cards and Last Word. And being a Speed type Friend, she gets a good bit of Slicing scaling on her attacks too, making Speed buffs effectively buff her damage as well as Yin ATK buffs.Just because she wants to be in familiar company and can't just be a standalone do-everything-solo Friend is far from meaning she's "bad"; it's really not a problem at all considering high level content needs full teams anyhow, so you might as well build them correctly.

Koishi really just wants Yin attack, Speed, and like just about everyone else, Spirit P. Mansion of Memories and Worlds in Hand are both great filler choices to boost Koishi's stats, as they both give over 100 Yin ATK each, do a little team support (Mansion of Memories giving teamwide Yin ATK UP and Worlds in Hand giving teamwide Crit ATK UP), and both even happen to boost Koishi's Energy type bullets, which is her most common bullet type. Lastly, if Koishi's team isn't giving her Spirit P, it never hurts to throw in a Witch of Scarlet Dreams or 2 to patch that up, although she's not hurting for Spirit P nearly as bad as most, with her frontloaded Spell Cards.

Underworld Party Night is Koishi's highest damage card by a good margin, which comes to little surprise as it's completely Yin attack focused. I mean, she's even on the picture. However, the card's Yin debuff effect, while incredibly strong, is single target only. Her most well rounded and easy to get card is Unknown Barrier Team, providing a somewhat lower but still very significant buff to Yin attack, while also being a farmable card, taking gacha out of the question. Slightly worse than Unknown Barrier Team is Anniversary at the SDM, but it's still a plenty good card if you just have it sitting around at Max Limit Break.

You'll no doubt want to level up Blind Will first, as it's the skill that gives Koishi 1.00 Spirit P as well as 2 levels of Yin ATK (her most important stat), as well as a nice teamwide ACC buff. Tulpamancy and Pebble Hat are a toss up between whether you care more about Speed buffs teamwide, or only Speed buffs to Koishi but with a lower cooldown, plus 0.5 Spirit P. Koishi isn't much of a team player to begin with so Tulpamancy first is probably the better choice.