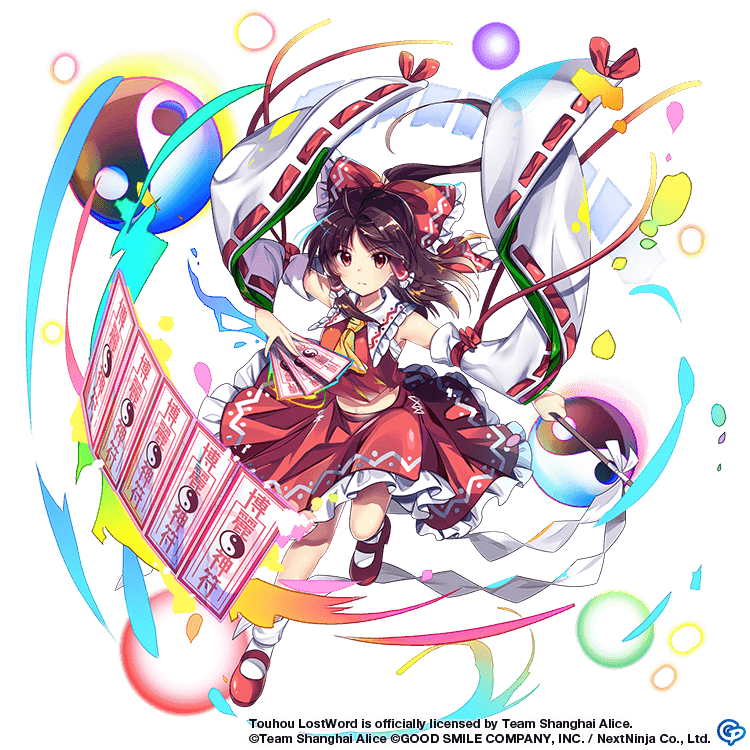 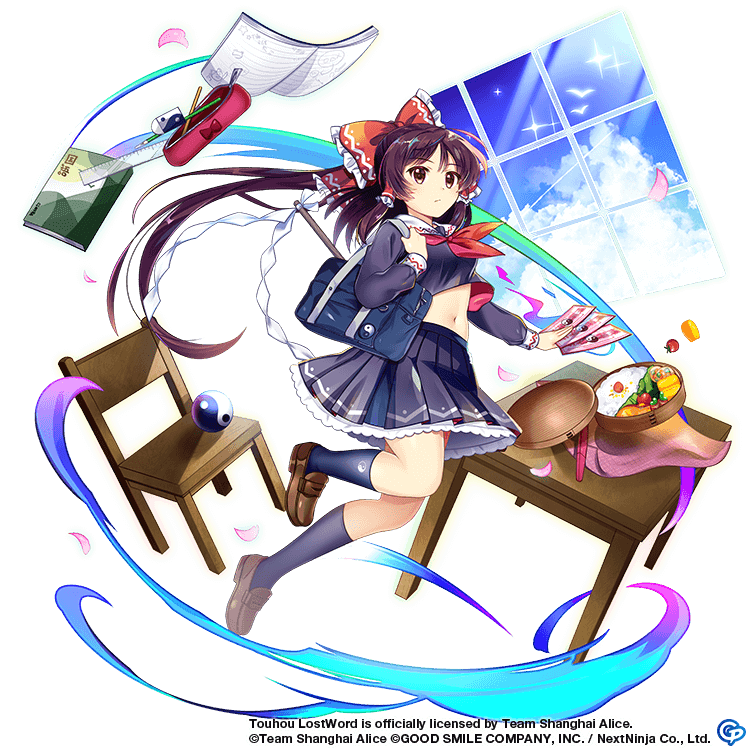 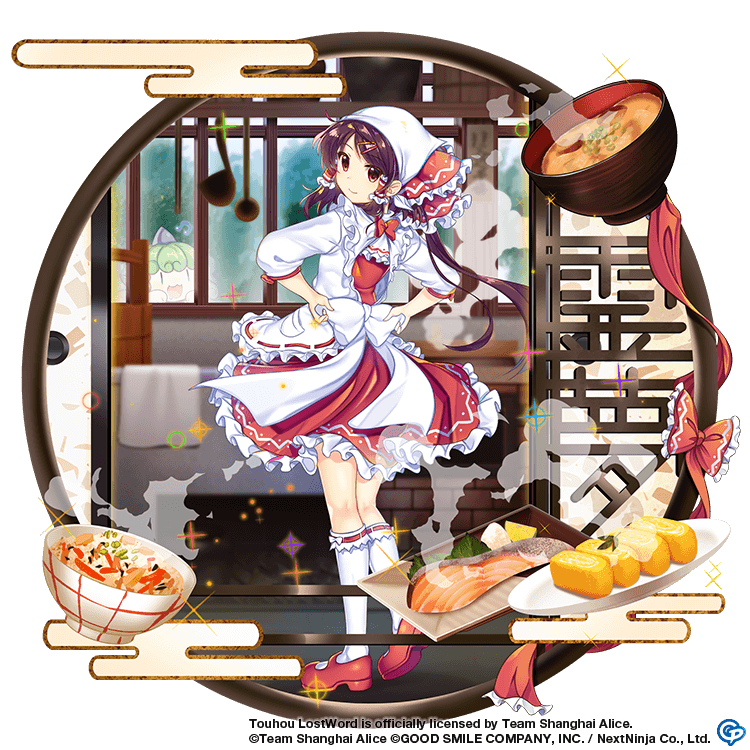 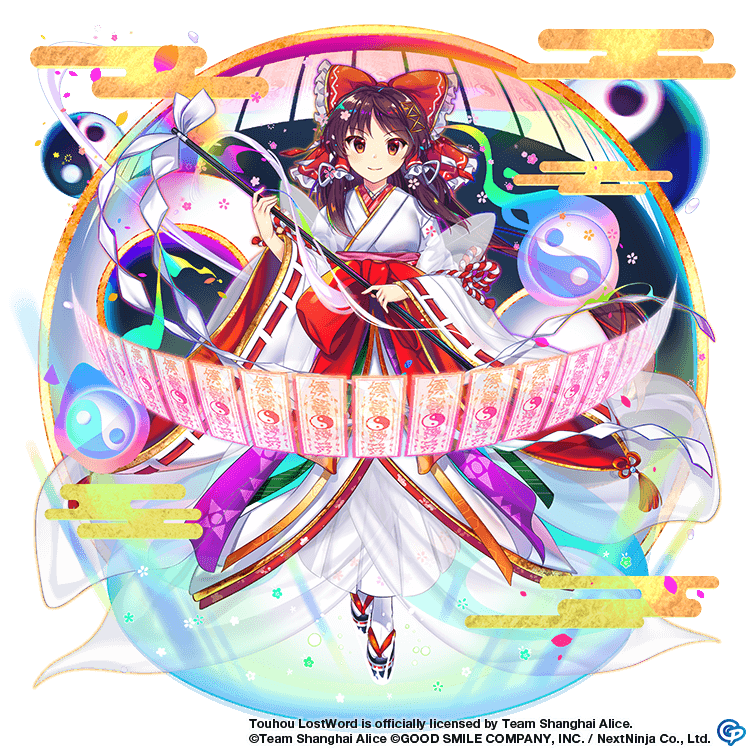 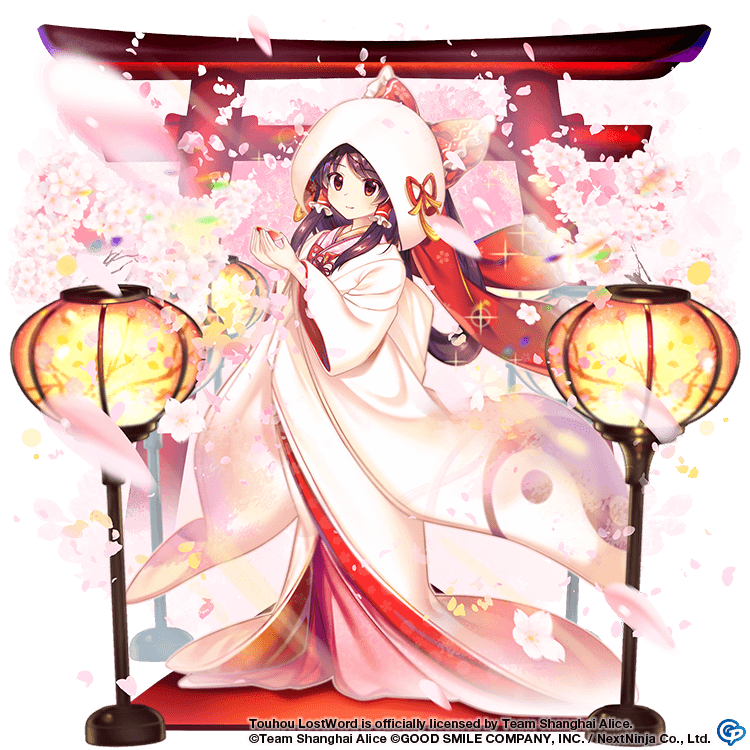 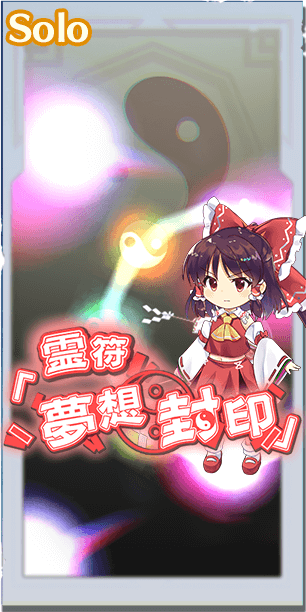 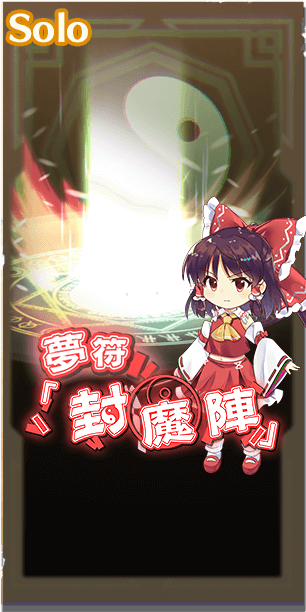 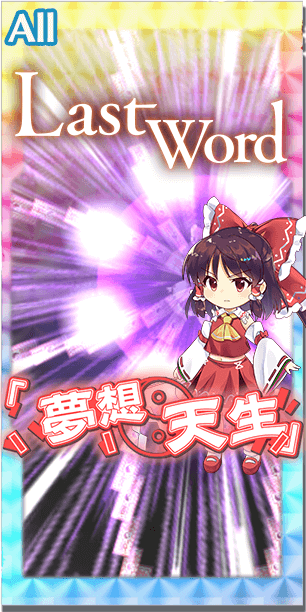 "But remember: If you don't work, you don't eat. You have to help me out too. I'm counting on you!"

The Shrine Maiden of Gensokyo, Reimu Hakurei is something of an enigma. Some see her as a reliable big sister who'll always get the job done. Some see her as a airhead with a serious lack of work ethic and too much pride. Most can agree she's somewhat greedy, but the extent varies. But what everyone can agree upon is that she treats everyone equally and makes sure the balance is kept in Gensokyo. Serving as the series deuteragonist alongside Marisa Kirisame, Reimu's ability to resolve any incident manifests itself in LostWord by being a extremely powerful tank, and a S Tier Friend that all new players get for free.

For farming purposes, Reimu possesses a reasonably powerful and somewhat backloaded All Last Word. As such, she will often require 2 or 3 turns to get the job done, and it's best to avoid any stages where enemies resist Sun.

For harder fights, Reimu circumvents the usual weaknesses of LostWord tanks. Her damage potential is rather high, due to the immense Hard scaling on her Last Word at 3 Power. She brings a large amount of defensive utility to the team, in the form of a large amount of Yang and Yin DEF and Evasion UP to All Allies alongside between her passive and skills. Her own Focus is somewhat low for a tank, but as Focus is generally considered a somewhat unreliable stat, this is far from crippling. Her damage outside of her Last Word is also somewhat low, which can be a problem in extremely hard fights. Finally, whilst she only has access to Sun, she get 0 Power access to it on both her Sealing Circle, and Persuasion Needle, the later of which is spammable due to being a shot.

Overall, Reimu is a extremely powerful friend, especially since she's free. Whilst she has some problems farming Sun resistant enemies, and her damage can be low outside of her Last Word, her kit is overall very powerful and she is well worth investing into.

Here are the chances for Reimu's secondary effects, alongside her Hard scaling (per bullet):

For Reimu's second Spell Card, Sealing Circle, anything that boosts Accuracy, or grants Spirit Power will suffice here. Accuracy is generally preferred to ensure a Break will land, but Spirit Power can be useful to fuel the next Spell Card used, or Yang ATK Up to boost her Last Word's power. Reimu's first Spell Card, Spirit Sign: Fantasy Seal, is unusually accurate, so there’s no need for an Accuracy buff for it, but either Spirit Power or Yang ATK will still work. Lastly, for a stat stick, look for Story Cards with Yang ATK.

What you socket into Reimu’s Last Word will depend on what content she’s doing. When farming, you’ll want to equip it with a Story Card with at least 2 Levels of Accuracy Up, such as Valued Tools of the Trade. When doing hard content, or if Accuracy UP alone can't get the job done, the unusually high Accuracy of the Last Word means you favor damage instead. The absolute best option is Ofuda DMG UP, with the best option there being A Curious Festival, which does more overall than Miraculous Ofuda assuming both are MLB. If your copy of A Curious Festival is not MLB, you should favor a MLB Miraculous Ofuda instead.

+ Powerful All Last Word which scales at 3 Power
+ Highly spammable 0 Power Sun on a shot
+ Powerful defensive utility, having large amounts of Yin & Yang DEF, and Evasion Up on both skills and her passive
+ Every new player gets a free copy.