Ringo (Veteran Detective of the Capital) 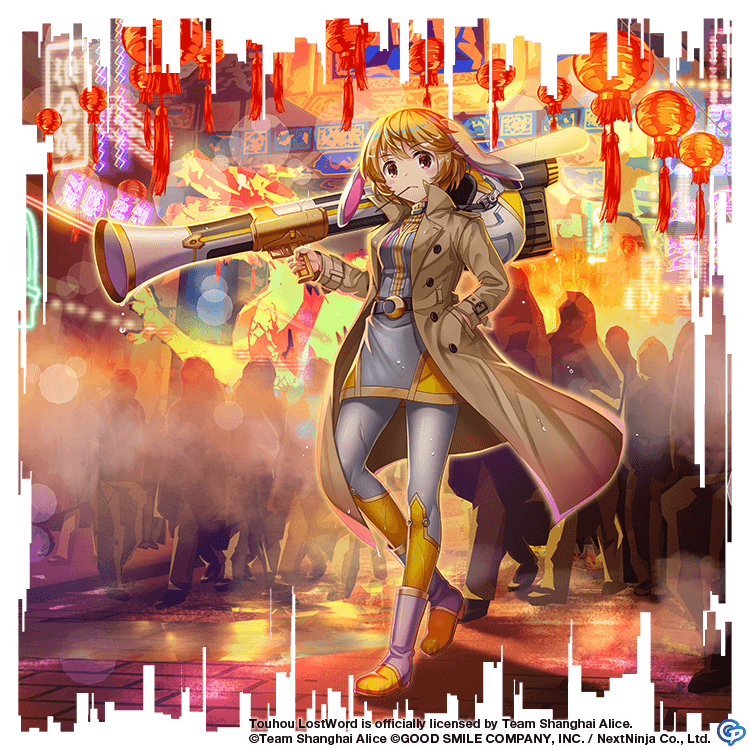 Veteran Detective of the Capital

The Spread Shot of Ringo from the Capital (a Touhou LW original). In this attack, she fires a laser from her bazooka. Hold up. A laser-shooting bazooka?! Any normal rabbit would be scared fur-less by such a crazy idea! Of course, the one who created it was Watatsuki no Toyohime from the Plentiful Temple, who is lovingly (and secretly) referred to as the Wonderful Inventor.
Bazoo-Fire

The Focus Shot of Ringo from the Capital (a Touhou LW original). In this attack, she blasts fire from her bazooka. Hold up. A bazooka that shoots fire?! Any normal rabbit would surely get giddy at the thought of such an incredible thing. However, it's installed with a voice-recognition system that ensures you can only fire when screaming an ability name. It's a shame, but it's all in the name of safety. 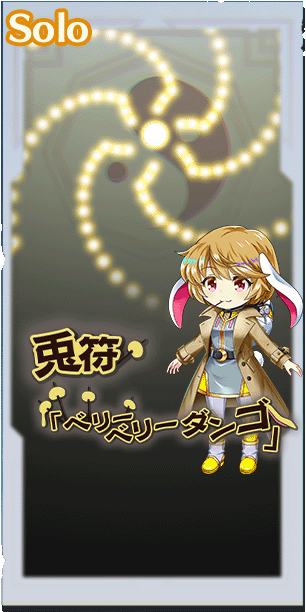 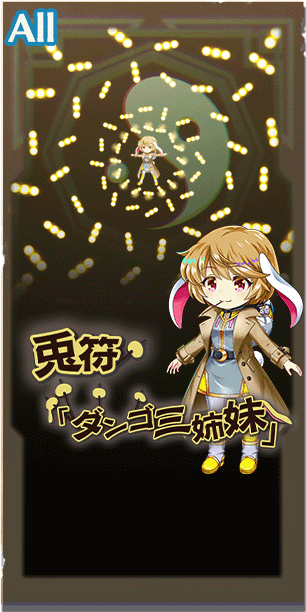 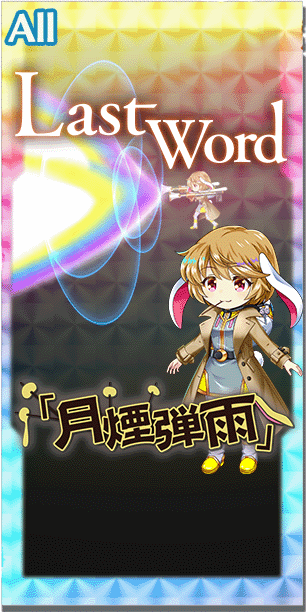 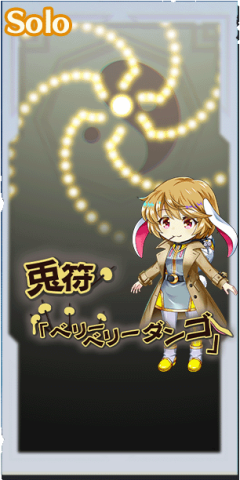 A Spell Card of Ringo from the Capital. The dango in this attack are presumably all different berry flavors. Ringo has a talent for using dango as bullets, and with their round shape, they each resemble a beautiful full moon. Although, kneading berries into the dough turns them red, so perhaps they look more like blood moons?
*Pre- and Post- effects assume max level. Effects per level can be viewed here.
Pre-Attack Spell Card Effects 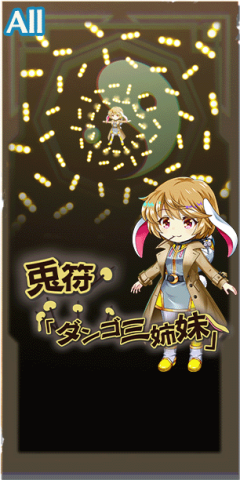 A Spell Card of Ringo from the Capital. In this attack, she fires three dango lined up in a row. Serving three dango per skewer is not so much a cliche as it is a form of artistic expression. Sure, you could put a fourth or a fifth on there, but three gives each skewer a better sense of balance. Sanshoku dango really are a thing of beauty.
*Pre- and Post- effects assume max level. Effects per level can be viewed here.
Pre-Attack Spell Card Effects 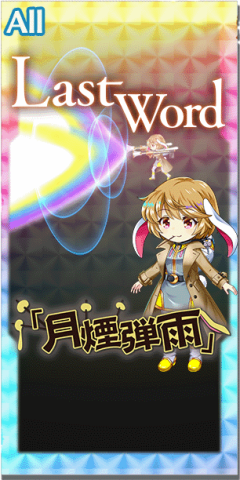 The Last Word of Ringo from the Capital (a Touhou LW original). In this attack, she unleashes the full potential of her bazooka. The Ringo from this world has already retired and conducts her own investigations in secret. She's been using this bazooka since before retirement, but its comical size doesn't quite fit her hardboiled-detective image. Fitted with a voice-recognition system, its official name is the Ringo Bazooka. Of course, only the Wonderful Inventor (Toyohime) could have given it such a wonderful name. Ringo definitely didn't retire because she didn't get along with Toyohime... right?
*Pre- and Post- effects assume max level. Effects per level can be viewed here.
Pre-Attack Spell Card Effects

For every layer of Barrier Status: Burn or Paralyze, Agility, Accuracy, and Evasion 1 level UP.
DMG to effective elements 30% UP.
When using Graze, party's Yang ATK 1 level UP (1 turn).

Who’s got a trenchcoat, a bazooka and a hard-boiled personality from her years of dealing with hard crime? No longer content simply being a humble dango merchant, Ringo’s B3 variant is prepared to faces life’s hardest knocks. Her determination manifests on a Technical-Class Friend who balances a range of roles, supporting Yang teams, increasing her side’s survivability and dropping heavy Anomalies on both allies and enemies alike.

Ringo’s recommendations are fairly straight-forward. Go with either The Witch of Scarlet Dreams for Spirit P to fuel her various Element lines and Anomaly breaks, or The Secret God of the Sky to gain some Crit ATK and boost her damage output by 50%.

Ringo’s Laser/Missile Last Word means Occult Circle works best on her, with a flat 35% increase to damage. Alternatively, Bonds of Blood can boost her Fire Damage by 50%, while Standing Behind You boosts her Moon damage by 30% while raising her Crit ATK.

Skill 3, Power Detection provides the most bang for your buck with a team wide Yang ATK and Crit ATK boost with Spirit P served on the side. For a more independent Ringo, go with Skill 1, Capital Loner Rabbit instead to start matches with an easy 2P, and some Burn and Paralyze barriers of her own that she can benefit from. Skill 2, Space Stakeout can come last, which unlocks some defensive options in her kit.

Ringo drops Paralyze on enemies with two of her Spell Cards, while breaking them with all of them. She can also land Burn with her Focus Shot, with her Last Word breaking those as well.

The ever useful guaranteed 3P Stun on a Spread Shot makes Ringo ideal for scenarios where you need to stall for a few turns.

Ringo can boost your team’s Yang ATK and Crit ATK via Skills, Grazing and Spell Cards.

With part of Ringo’s kit dedicated to lowering enemy Yang and Yin ATK, you will likely have to deal with situations where those debuffs get wiped when she, or any of her Friends inadvertently Full Breaks the enemy. This is especially easy to do, with her penchant of dropping and breaking Paralyze barriers on her opponents.

Ringo’s Last Word suffers the unfortunate side effect of being divided cleanly in half by both Element and bullet type. A minor setback, given that there’s a card that buffs both bullet types at once, though with stronger Story Cards likely to show in future, this may limit her growth potential.

Ringo’s electrifying personality may not be appreciated by all Friends. Bring along allies who benefit from Paralyze barriers, or be careful with popping Skill 1 in battle, lest someone ends up being stunned mid-turn.