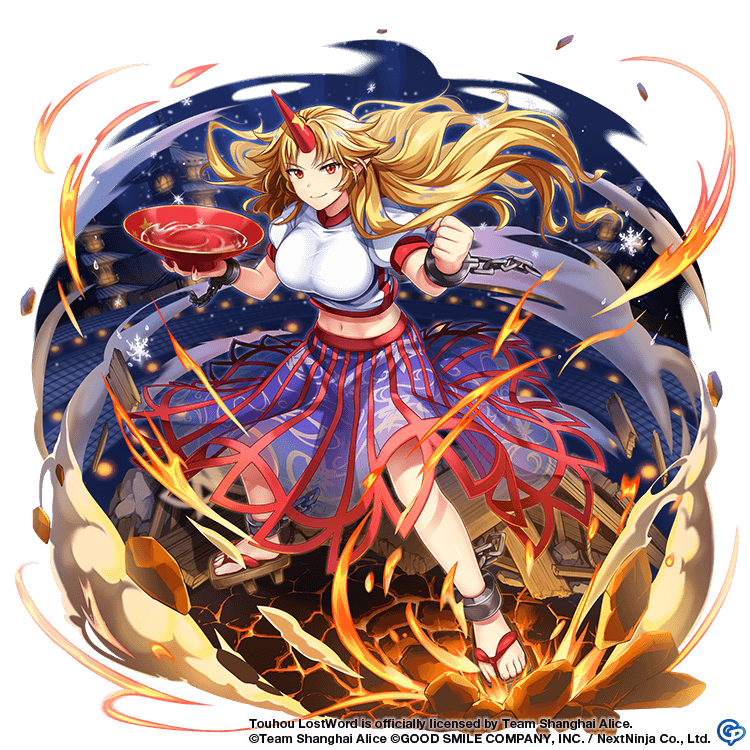 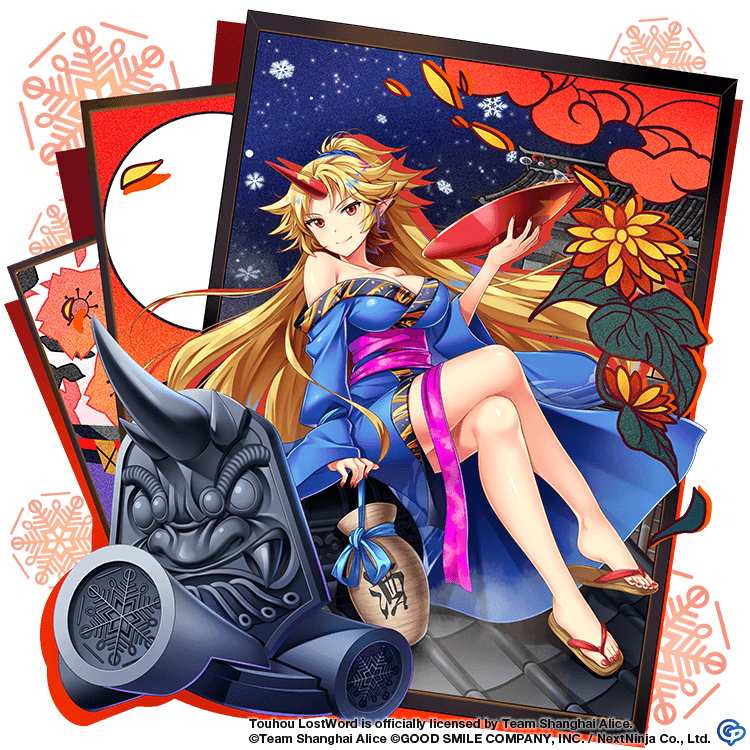 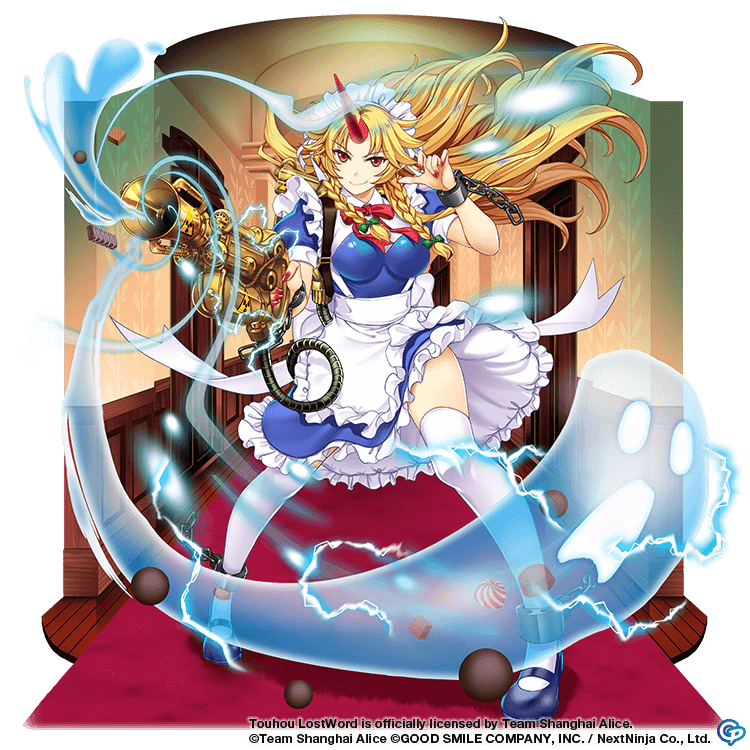 Yuugi Hoshiguma's Spread Shot (a Touhou LW original). She calls forth tenka to attack her opponent. Tenka are a type of onibi, or will-o'-wisp, that make noise when flying across the sky. They are also said to be a type of vengeful spirit.
One-Horned Lightning

Yuugi Hoshiguma's Focus Shot (a Touhou LW original). She focuses her qi into the horn on her forehead to call down lightning on her opponents. In the eight trigrams, lightning corresponds to the northeast cardinal direction, which is also known as the kimon, or oni gate, as it is said to be the direction from which oni come to and from. This is why the Shinto god of lightning, Raijin, is depicted similarly in appearance to an oni―A mix between a bull and a tiger. 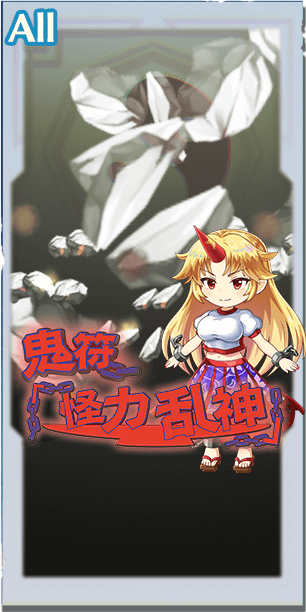 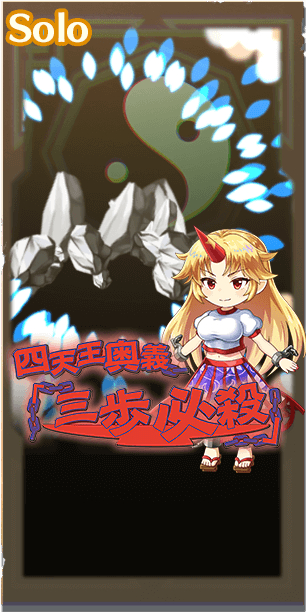 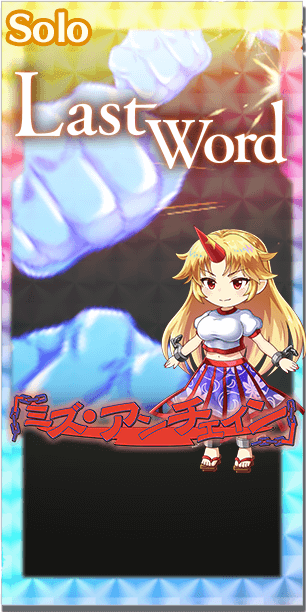 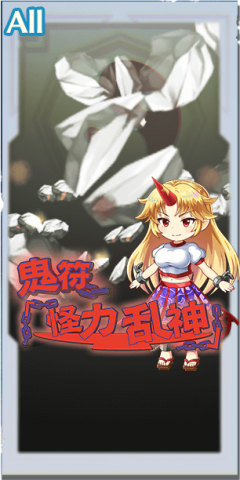 Yuugi Hoshiguma's Spell Card. In this attack, she unleashes unfathomable power to demolish her opponents along with the ground upon which they stand. Anomalies, strength, disorder, and spirits are unexplainable phenomena not bound by logic that the Chinese philosopher Confucius avoided talking about. However, Yuugi is the ''Spoken-of'' Unexplainable Phenomena, so perhaps there is something to her power that demands discussion even though it is not fully understood.
*Pre- and Post- effects assume max level. Effects per level can be viewed here.
Pre-Attack Spell Card Effects 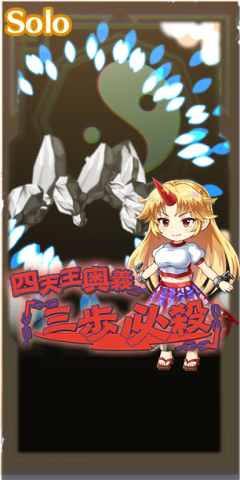 Yuugi Hoshiguma's Spell Card. With each step forward, she creates walls of bullets to trap and bring down her opponent. If Yuugi ever brought her full power to bear, this attack would most definitely be a certain knockout. However, according to the records of a certain magician, even though this Spell Card is a massive display of strength, Yuugi is laid-back enough to play around with it.
*Pre- and Post- effects assume max level. Effects per level can be viewed here.
Pre-Attack Spell Card Effects 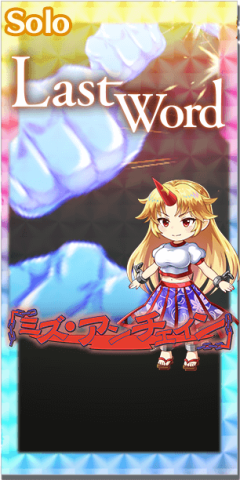 Yuugi Hoshiguma's Last Word (a Touhou LW original). In this attack, she breaks the shackles of her self-imposed limits and displays a glimpse of her true power. Though in saying that, she is particular in only displaying her power in feats of strength. In the west, there are apparently tales of enormous demons bound with chains in the depths of Hell.
*Pre- and Post- effects assume max level. Effects per level can be viewed here.
Pre-Attack Spell Card Effects

DMG to resisted elements 25% UP.
When using Graze, own CRIT Accuracy 1 level UP (1 turn).

Yuugi Hoshiguma was released on November 26th, 2021 in Festival: Bosses of Strength and Subtlety.

The Spoken-of Unexplainable Phenomena, Yuugi Hoshiguma is everything you would expect of when you think ‘oni.’ She loves to fight, loves to drink, loves to party, and loves the brave and the strong. Whilst she spends most of her days in the underground with her fellow oni, from time to time she’ll venture up to the surface looking for a good fight. With sake dish in hand, she’s here to brawl with your foes as an A-Tier Friend.

For farming, Yuugi is decent, thanks to her Solo targeting Last Word Miss Unchained’s 2-1-2 layout and a solid Youkai & Human Killer, combined with a solid amount of Yin and Yang ATK UP. However, it has some major failings - Yuugi’s kit entirely lacks native Accuracy, and the mixed elements upon it leave Yuugi facing resistances more often than usual. To an extent, her character ability can mitigate this, but her somewhat middle-of-the-road damage can only go so far. Auto Replay at least helps out somewhat in this regard, giving her access to her tremendously powerful fifth and sixth bullets in farming situation, though she will have accuracy woes at that point unless you’re willing to spend three turns.

In harder fights, Yuugi’s role is rather much the same - she punches one person with Miss Unchained really hard, especially if they’re a Youkai or Human. She has a major benefit compared to other CRIT attackers in that she brings 2 Levels of CRIT ATK & Accuracy UP for 2 turns to her whole party with her skills - generally though this is better on Killer attackers, who tend to lack CRIT ATK and thus massively benefit from it. In this regard, you can almost consider her a better Hieda no Akyuu.  Otherwise, her Breaks are solid, but nothing too special - One-Horned Lightning gives 0P access to All targeting Star on a Basic Shot, Oni Sign: Anomalies, Strength, Disorder, and Spirits grants 2 All targeting Star and Earth Breaks at 3 Spirit Power, Big Four Arcanum: Knock Out In Three Steps provides 2 Solo targeting Metal and Earth Breaks for 2 Spirit Power, and Miss Unchained if you choose to use it for breaks give 3 Solo targeting Metal and Star Breaks for 3 Spirit Power. As mixed Solo targeting attacks can rarely hit more than one weakness, this effectively means two of her spell cards will only have one element most of the time for the sake of Breaking and thus half the listed total number of breaks, albeit with flexibility in who they can target.

Yuugi also has some notable downsides. Her access to self buffs are somewhat lacking, but that’s not a huge issue when her damage output in two turns is sufficient to take down most targets (if somewhat annoyingly prone to whiffing due to her inability to ensure perfect accuracy on Miss Unchained without being given three turns or external accuracy support). She also somewhat lags behind the competition, as it’s very difficult to practically scale her due to a mixed Last Word.

Overall, Yuugi’s a solid enough Friend, if nothing exciting. Point her at an enemy, have her punch them, and give your Killer friends some Crit ATK support. Just turn down her offers to go drinking afterwards - it won’t end well for you or your liver.

Yuugi unfortunately wants too much from her Story Cards, due to her reliance on Power, Accuracy, and having a mixed damage Last Word, so you'll have to compromise. For Tower, look to Spirit Power UP, as it gives her the most bang for her buck turn wise - you can also give her Accuracy UP, if a teammate cannot, as well as CRIT or YIN ATK UP to further boost her damage. For Arena, look to Spirit Power UP and CRIT ATK UP, to best take advantage of her front-loaded Spell Cards. Lastly, if you need stat sticks, look to Yin and Yang ATK, favoring Yin if you can’t get both.

As Yuugi has no native Accuracy, she pretty much defaults to a Story Card that can provide it, with more being better - as such, a MLB Valued Tools of the Trade is her cheapest option. If you can provide her Accuracy support, be it by the Story Cards on her Spell Cards or her teammates, you can opt for a Body DMG UP card such as Eating Contest for maximum damage.

As Kabukimono gives both herself and Killer friends the highest degree of bonus damage possible, prioritize maxing it out first. Afterwards, Vengeful Spirit Quelling should be raised, and lastly Hoshiguma Dish is rather lackluster and can be saved for when you’re out of other skill targets to raise (or Yuugi gets a Fantasy Rebirth).