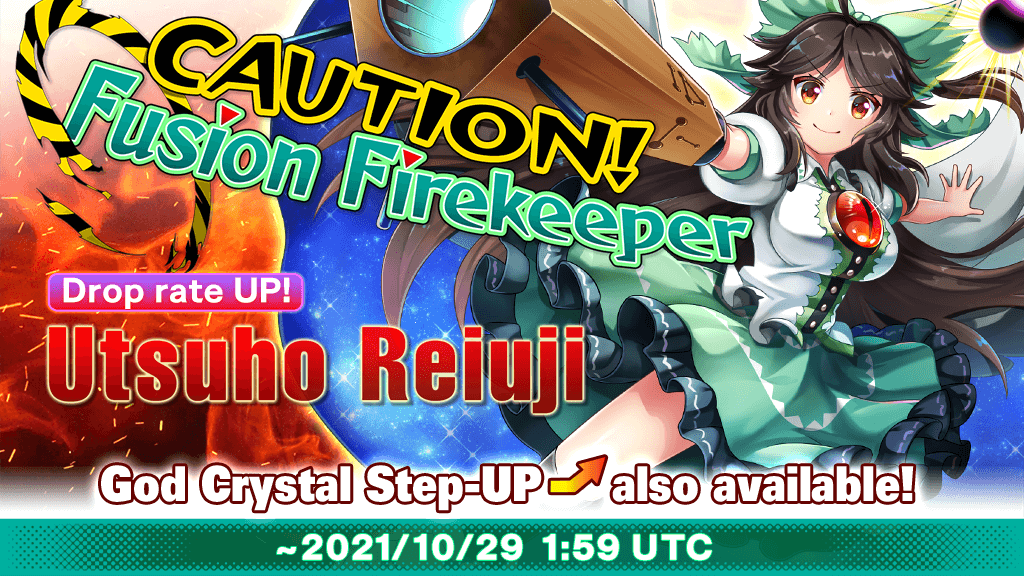 If you're looking for atomic levels of power, it's hard to go wrong with Utsuho. She's very strong, with an All targeting Last Word, and good Agility support for slicing comps (albeit of limited effectiveness as many Slicing attackers already have high levels of Agility UP and thus suffer diminishing returns). She's also got some Fire and Sun Breaks, including P0 Sun on a Basic Shot, but overall you're picking her up for her power or Agility support, not for the Breaks. This is a General banner, but Utsuho will not be added to the General pool for a few months. 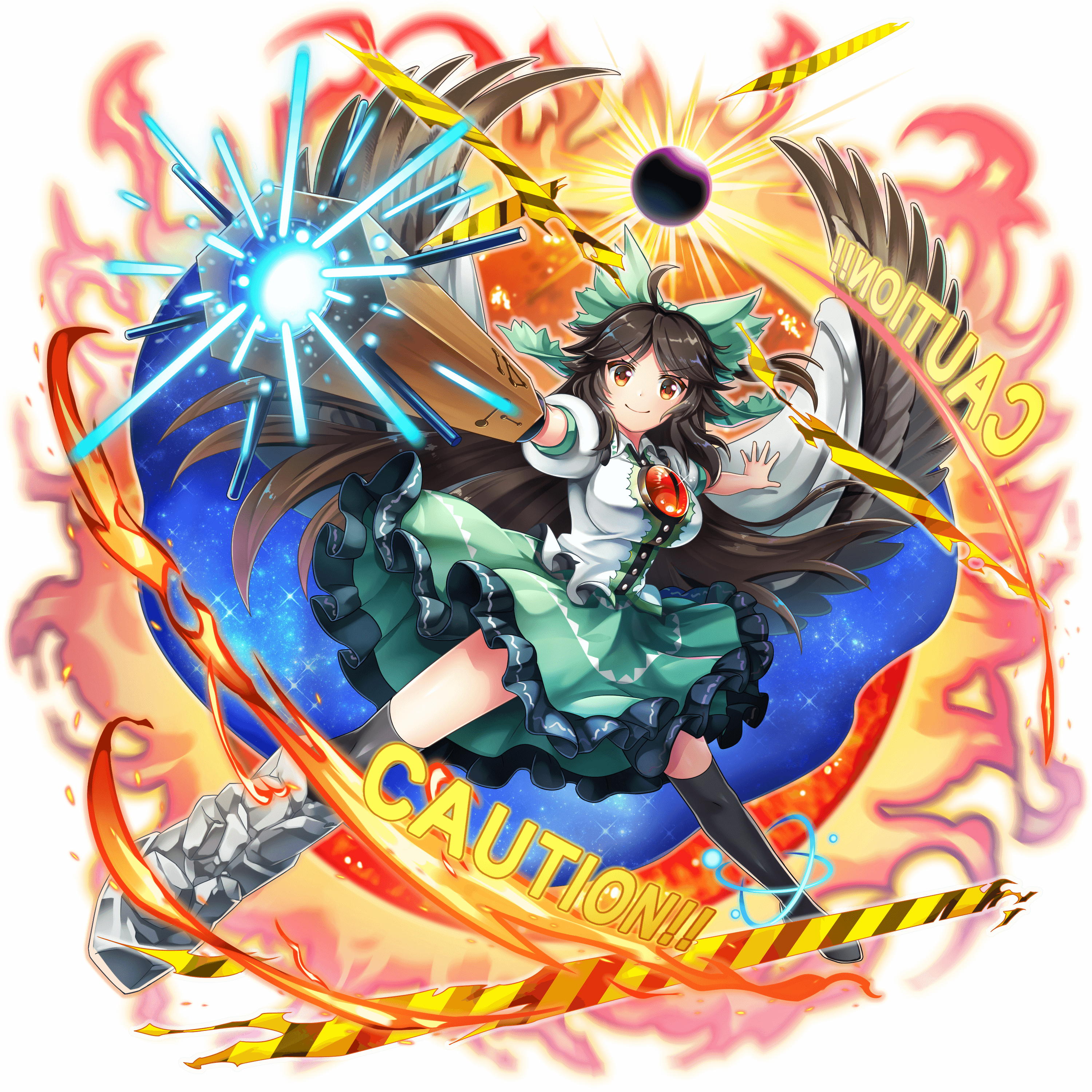 +Extremely strong All targeting Last Word for farming or longer fights alike.
+Provides Agility UP for the entire team, though this is of limited use.
+Can provide Yang DEF DOWN on a priority target or two.
+0p All targeting Sun Breaks on a Basic Shot 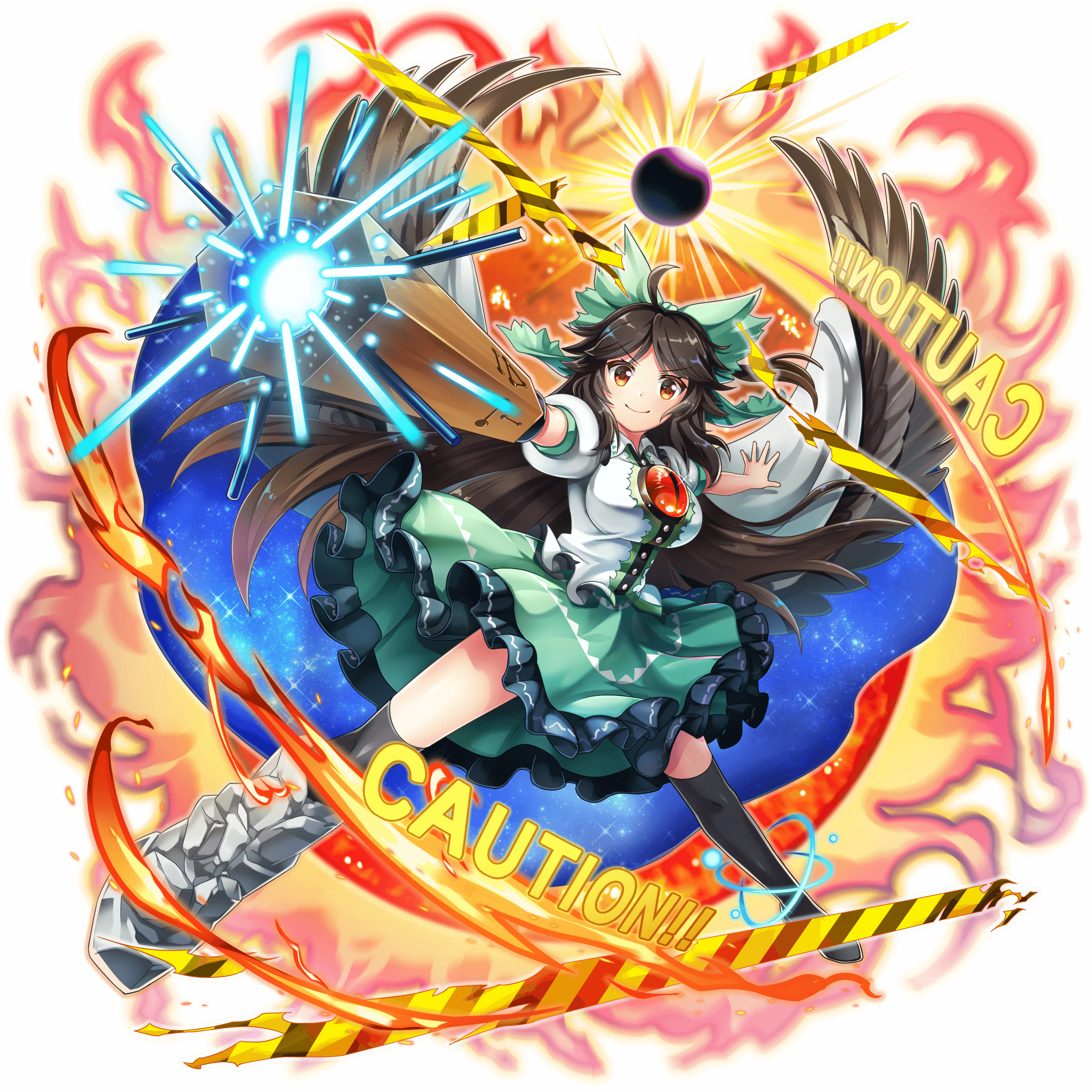 Utsuho Reiuji, alongside her best friend Rin Kaenbyou, was once a lowly beast youkai within former hell. Then, one day Satori Komeiji took the two of them in, and they’ve been fiercely devoted to their mistress ever since. They lived a simple life for a time, until the gods of Moriya entered Gensokyo - with Kanako Yasaka seeking to expand her domain, aiming to harness the power of nuclear fusion to do so. However, her only method to control that power was the god Yatagaratsu - a dangerous god, whom could only be housed in a vessel with a mind empty enough to contain it.

After much searching, Kanako found Utsuho, the perfect candidate for taking in this god. Once she was fed Yatagaratsu in a dream, the hell Raven mistook Kanako’s words for an invitation to take over the world and, drunk with power, began the events of Subterranean Animism. After she was bonked on the head a few dozen times, Utsuho calmed down and began to run the Underground Geyser Center, an area to house nuclear energy among other things.

As an individual, Utsuho Reiuji (or Okuu, as she’s been nicknamed by Rin Kaenbyou) is fairly simple, but can be pretty nice behind the massive ego that led her to decide taking over the world was a good and cool thing to do. Fan-works tend to play up the nice angle (as well as her more ditzy tendencies). She has the power to control nuclear fusion, which she understands pretty dang well.

As for her design - her arm canon is literally a nuclear fuel rod (and is a shoutout to the 'third leg' that Yatagaratsu was said to possess), her enormous wings and the 'third eye' on her chest hearken to the Black Bird of Chernobyl, and her weird lumpy sock is a reference to the elephant's foot of Chernobyl. Also she's got electrons around her other foot, which doesn't reference anything but it sure is cool!

In LostWord, Utsuho is an attacker with extremely potent slicing scaling and useful, but limited team support. For starters, she sets herself up extremely well, with three powerful skills: Leg of Decomposition boosts her Agility by 2 levels for 3 turns, Leg of Fusion  gives her a whopping 2 Spirit Power UP as well as 2 levels of Accuracy UP for 3 turns, and Third Leg gives her 3 Levels of Yang ATK UP for 2 turns as well as 2 levels of Agility UP for all allies for 3 turns. Additionally, her whole team gets another level of Agility UP for a turn each time she Grazes thanks to her character ability. Tying all of this together is her Last Word, Primordial Sun, which features a blistering 50%/70%/80%/0%/100%/0% Slicing scaling (meaning that much of her Agility will be added to her Attack for damage calculations). Unfortunately due to its 3-1-1 layout it can’t take full advantage of her instant Spirit Power generation, but it still hits very hard all the same.

Her other attacks are also useful. For starters, her Focus Shot, Hell Wave Cannon, features 1 All targeting Sun Break at 0 Power, which can be a decent source of additional Breaks. Her first Spell Card, Explosion Sign: Mega Flare, is notable for having an extremely potent 70%/70%/0%/80%/0%/80% Slicing scaling, which can help when you need to squeeze out extra damage, as well as an average 1/2/2/3 Solo targeting Sun Breaks for 0/1/2/3 Spirit Power. And lastly, her second Spell Card, Atomic Fire: Uncontainable Nuclear Reaction Dive, features 2 levels of Yang & CRIT DEF DOWN for 3 turns with Solo targeting, alongside an average 1/2/2/3 Fire Breaks for 0/1/2/3 Spirit Power.

That’s pretty much the long and short of it for Utsuho. She’s a good attacker who shines when partnered with other Slicing characters, though the benefit they gain out of her additional Agility levels will usually be less than you’d hope due to diminishing returns, with the very best attackers getting even less. The hell raven is a bright sun to light up your day, and to burn your opponents up (with second degree burns, remember, no killing in Spell Card duels!).