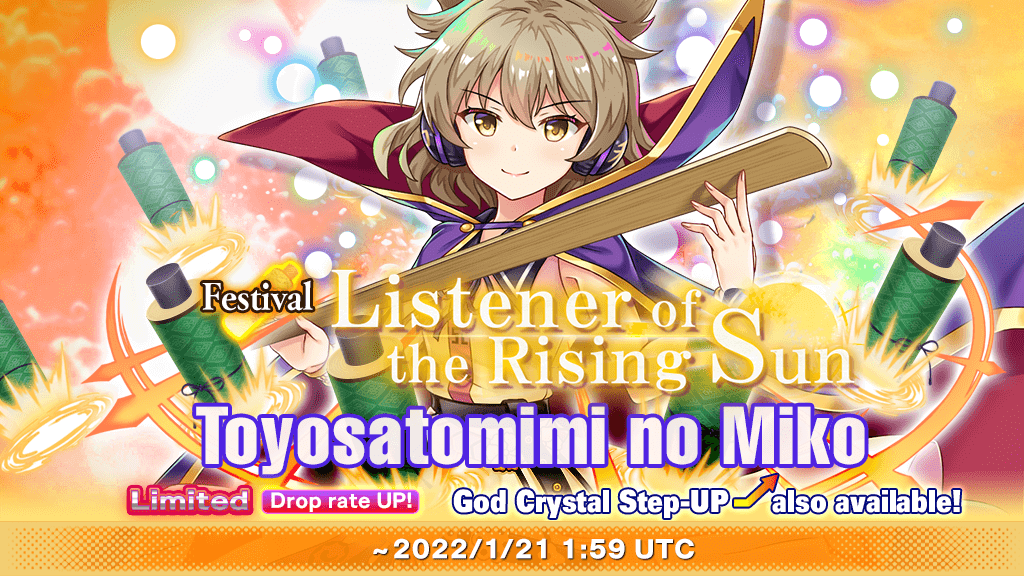 A strong Solo targeting burst nuker, the Crown Prince also brings a solid amount of Breaks to the table, alongside All targeting P0 Sun on a Basic Shot, and some Accuracy support. Outside of that though her other primary team support, that being some Yin ATK UP on a Spell Card, is only really useful in the Arena (and does not benefit herself), and she can’t hit quite as hard as the top tier nukers. Still, if her majestic looks appeal, or if you just want another Solo target nuker, she won't let you down.

This is a Festival banner, and as such, Toyosatomimi no Miko will not be added to the general pool once it's over. Either get her now, or you'll have to wait for her to appear again on a future banner. 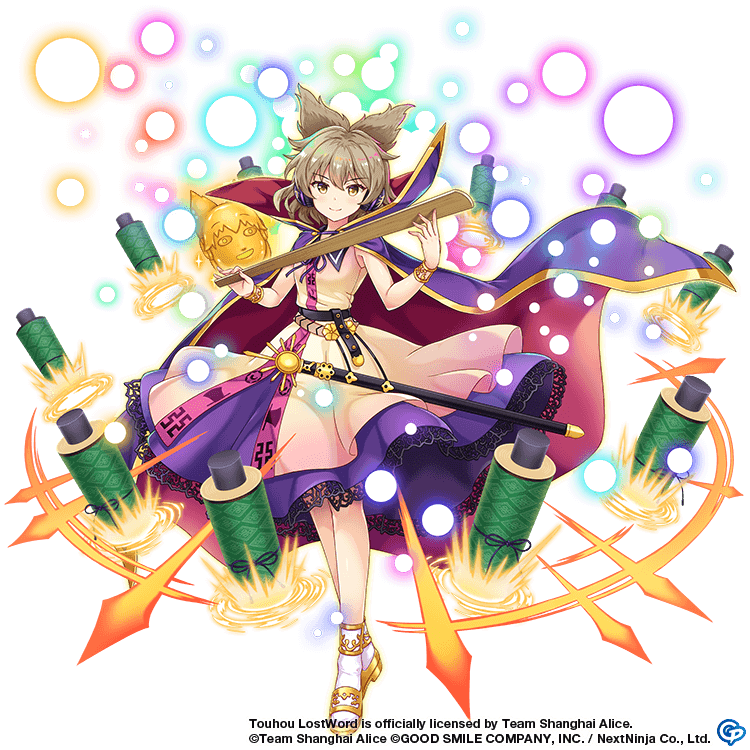 -Can't hit as hard as the highest tier of attackers, and her support doesn't make up for that
-Yin ATK support isn't particularly helpful with top tier attackers outside of the Arena, and Miko doesn't benefit from it herself 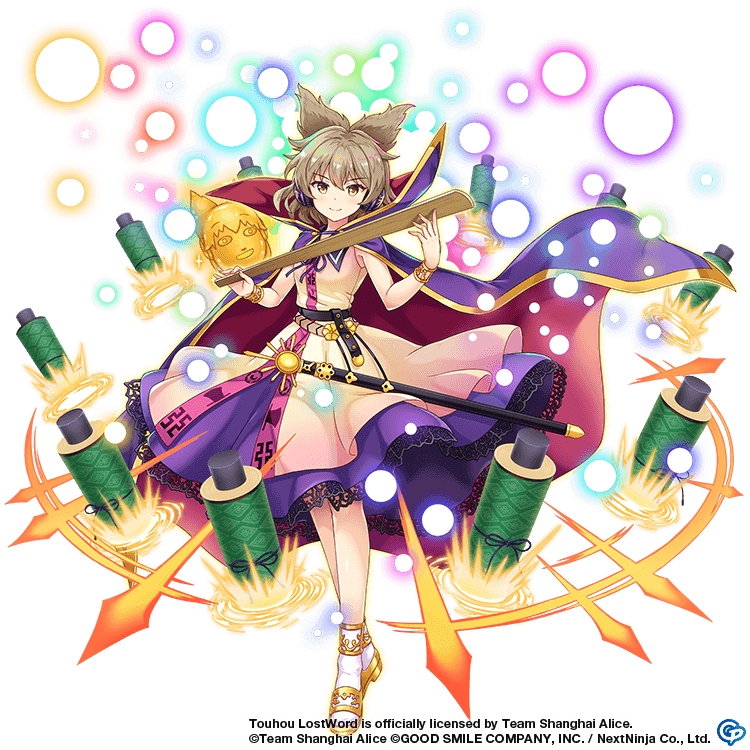 Toyosatomimi no Miko was, in years past, the legendary figure known as Prince Shotoku. In real life, he was an individual who was more notable in death, due to a cult which rose with him at the helm. In Touhou Project, they weren’t much different - just like the real life Shotoku, the Crown Prince spread Buddhism far and wide. However, unlike the real life Shotoku, this was for a different reason.

Shotoku was born as a genius, who could listen to ten people talk at the same time. A genius whom all looked up to from a young age, due to their ability to provide saintly wisdom. A genius who was dissatisfied with life, with mortality, with being merely human. From their desire to defy death, Shotoku was approached by a hermit known as Seiga Kaku, who taught them the ways of Taoism - to become truly immortal, and rule forever. Whilst a useful religion to gain power from, which would eventually result in tales of their heroic feats passing into legend, it was less than useful for calming the soul of a violent nation - enter Buddhism which forbad killing, a most useful religion for a turbleunt, murderous land. Shotoku spread it simply to make the country stable, whilst behind the scenes following Taoism in the pursuit of immortality. Unfortunately said pursuit resulted in their body being ruined by cinnabar, and as such, they opted to pursue a different form - becoming a Shikaisen.

By making it seem like to the world itself they had died, they would be resurrected - and in an ideal form for them no less. However, this was a fearsome process, and so she had her vassal Mononobe no Futo and consort Soga no Tojiko test it first. Satisfied as they slept without decaying, Miko performed the ritual as well and slumbered within their mausoleum, planning to wake up to lead the people of Japan as their true administrator, in her perfected body, as a perfect saint.

Then the faction of Buddhism wisened up to her bullshit and promptly sealed Miko’s grave.

Over time, the people of Japan began to believe youkai and the supernatural to be merely myths and legend - and as such, shouldn't the tales of Prince Shotoku, he who accomplished unbelievable feats, be considered fiction? As a result, Miko’s mausoleum wound up being transported to Gensokyo, fading into the land of myth and legend. Unfortunately at the exact same time, a faction of Buddhists led by Byakuren Hijiri wound up in Gensokyo, and promptly built their temple atop the mausoleum to prevent Miko’s resurrection. Eventually though, the seal simply broke, and Miko was at last resurrected during the events of Ten Desires - looking much different with her resurrected body than she did in life, as showcased by an amusing ending to Ten Desires in which Sanae Kochiya is utterly baffled by how Miko looks nothing like the Prince Shotoku on a ten thousand Yen bill. Now, she seeks to build power once more, within this new land - and sure, she'll lend you her considerable power. Those tales of her heroic feats were based on something after-all!

The majority of Miko’s power is in her Solo targeting Last Word - Heed the Commands with Absolute Care. With a 1-1-3 layout, and 50%/0%/0%/0%/70%/70% Slicing and 0%/0%/0%/0%/0%/80% Hard (complimented by a pre-attack effect of 2 levels of Agility UP (3T)) you’d think it was suited for longer fights - however, her second skill, Tatsuta Protection, provides the Crown Prince with 2 Spirit Power UP to abuse this and instantly deal high damage as well as 2 levels of Yang DEF UP. However, the Yang DEF UP is simply icing, due to the scaling on her Last Word being somewhat lackluster. Her first skill, Shoutoku’s Swords compliments this further with 2 levels of Accuracy (3T) and Yang ATK (2T) UP. For more evasive foes, her Character Ability grants her 1 level of Accuracy UP (1T) for each Boost - in other words, 5 levels of Accuracy UP between the two. Finally, her third skill, Tsunashiki Shaku, gives her Charge to make her easier to support - and somewhat oddly, 2 levels of Yin ATK UP (3T).

Whilst not strictly detrimental, Miko’s kit does have some of this oddness elsewhere as well. Her Last Word, on top of the Agility UP, also has 2.5 levels of CRIT ATK UP (2T), which is rather out of place given her lack of CRIT focus. Additionally her first Spell Card, Discernment: Laser of Seventeen Articles, grants her whole team 2 levels of Yin ATK UP (2T) - a somewhat odd choice for a Yang attaker, and decent support for less powerful Friends - unfortunately, more meta units will already have a ton of Yin ATK UP to begin with, though even they will benefit from it in multi-wave situations like Arena. It also packs 2 Sun and Metal All targeting Breaks for 3 Spirit Power total.

Her other notable attacks are rather better off: Influence of the East, her Spread Shot, has an impressive 1 All targeting Sun Break for 0 Spirit Power, making it highly spammable. Additionally her second Spell Card, Light Sign: Halo of the Guze Kannon, has an average 1/2/2/3 All targeting Sun Breaks for 0/1/2/3 Spirit Power, as well a 2 levels of Accuracy UP (2T) with a 50% chance for 1 more level for her entire party.

Overall, Miko’s a solid nuker, with a smidge of Accuracy and Yin ATK support. She’s certainly great, but not truly top tier. Just make sure to heed the commands with absolute care, lest she begin to lecture you about properly following her orders and why she’s the only one fit to lead you and Gensokyo.

Team comps suggestion to have fun?
No kidding, replace OG Medea for another DPS when you fight rider enemies. BG doesn’t…
Best append skil for Miyamoto Musashi (Berserker)?
What do you guys think is the qppend Skill for Miyamoto Musashi (Berserker)? don’t…
Chaldea Boys collection 2023 NA banners
I am trying to get Napoleon and NP3 Ody for next year’s boy’s collection NA. Will they…
Odysseus with Castoria
(topic deleted by author) 1 post - 1 participant Read full…
Is mana loading append skill universally useful? Do I unlock it for all my servants?
It fits quite perfectly for servants with 30% self-charge (like Godjuna). Allows you…
Read More