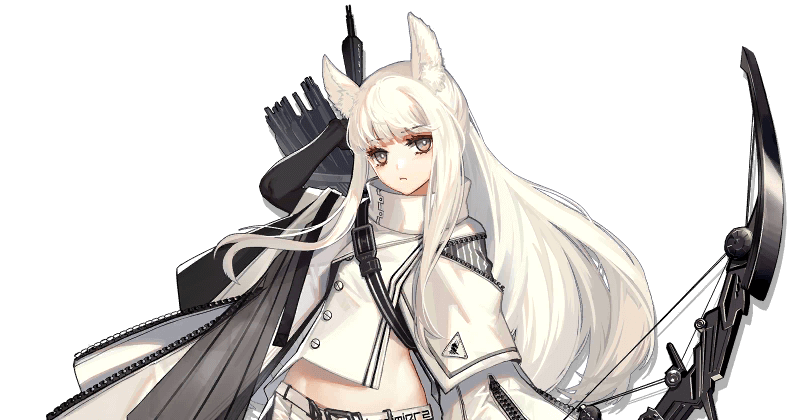 EDITOR'S NOTE: The opinions expressed in this article are solely that of the author and do not necessarily reflect the opinions and beliefs of the website or its affiliates.

I've made references to WWII before, so this time, this is about another side of WWII. Even a game with historical references cannot avoid being affected by real life issues.

Many thanks to everyone who discussed with me on my lore Twitter back in June. I was hesitant to write it up and made some blunders. However, I have learnt from the discussion and I share what I have learnt here too. I hope you all do learn about the context too.

EDIT: Made some edits because there are still things that I am misinformed about.

Comments are disabled because last time I had uncivil people in the replies of how the Spring Pulse EP was actually for China's COVID-19 remembrance in April 2020. I just hope that by reading this, you are aware of whatever that is happening behind the change in Platinum's voice actor.

A condensed version of the issues:
-Japan has committed atrocities during WWII such as occupation of many Asian countries. They have apologised but other actions hinder how much their apologies are accepted.
-Kayano Ai, Platinum's voice actress, visited the Yasukuni shrine, which includes convicted war criminals. Maybe it was out of ignorance. Or not. We do not know.
- In response, Platinum's voice lines were removed from Arknights CN
-This voice actress removal incident is not the fault of the CCP. It is due to noisy Chinese nationalists. The CCP is not this free. They have anti-gaming laws to implement, not deal with voice actors in games.
- Platinum's voice lines will now be changed to a different JP actress for both CN and global servers. CN will get CN voice actress too, but it is unclear if CN voices will come to global servers.

Change in Platinum's voice actress on CN and global servers

Platinum's Japanese voice actress, Kayano Ai has been removed from Arknights and multiple other Chinese mobile games such as Girls Frontline and Azur Lane in June. In the next global update, Arknights will change her voice actress. The global versions of other games may also follow suit. 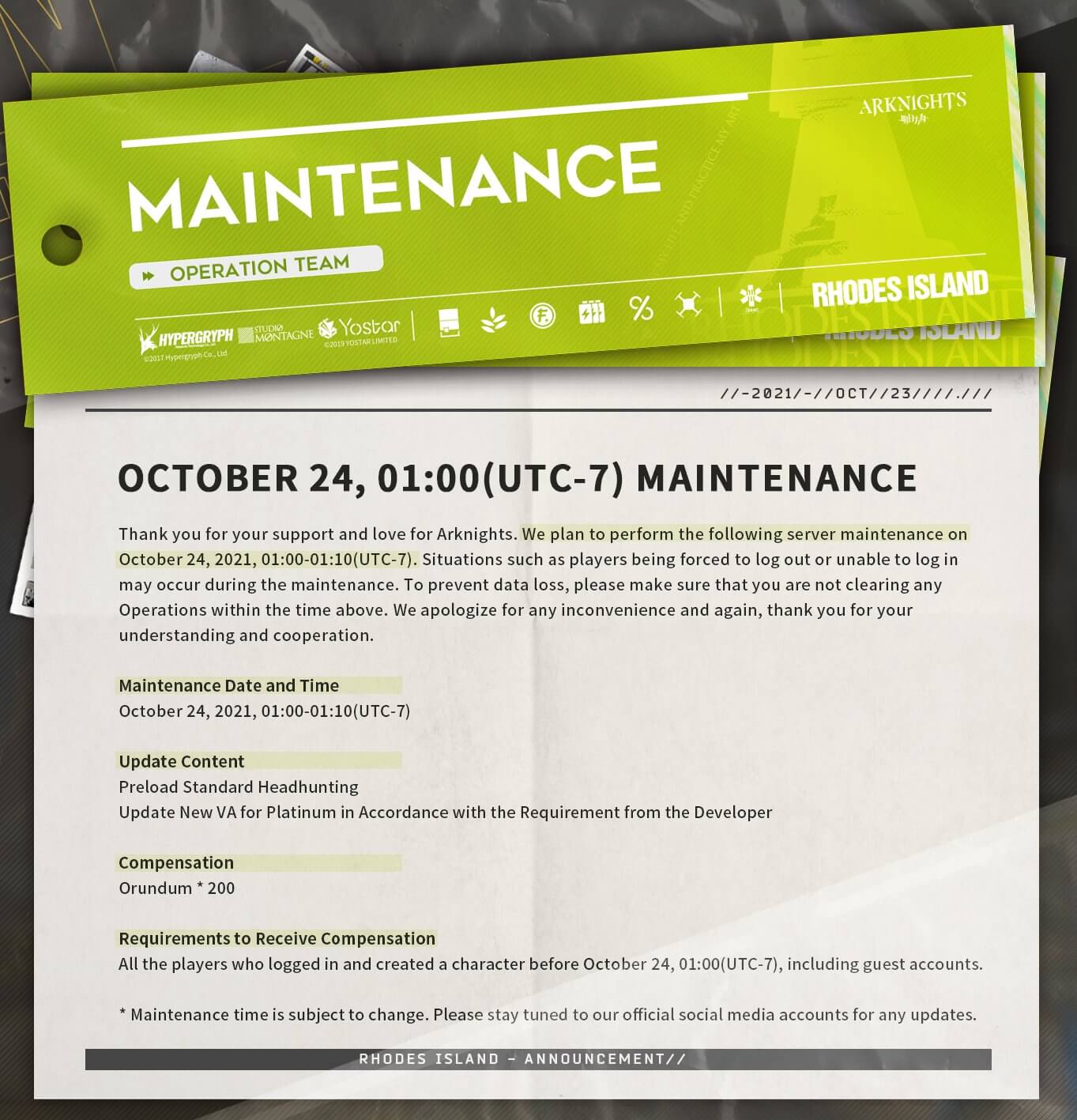 Japanese voice actress Ai Kayano was embroiled in controversy on Chinese social media after she revealed that she recently paid a visit to the Yasukuni Shrine.

The controversy came after Kayano said in a broadcast on February 11 that she paid a visit to the Yasukuni Shrine recently and regarded the visit as a “comfortable” one and that air is fresh there.

The shrine lists the names, origins, birthdates, and places of death of 2,466,532 men, women, children, and various pet animals. Among those are 1,068 convicted war criminals, 14 of whom are A-Class (convicted of having been involved in the planning, preparation, initiation, or waging of the war). This has led to many controversies surrounding the shrine. Enshrinement is not exclusive to people of Japanese descent. Yasukuni Shrine has enshrined 27,863 Taiwanese and 21,181 Koreans.

There may be no Chinese at that shrine, but China was occupied by Japan for 8 years from 1937-1945. Go search up Nanking Massacre to see a glimpse of the horrible killings done.

This article summarises the history of the Yasukuni shrine from various points of view.

Basically Japan had done a lot of war crimes during WWII. Even my own country, Singapore, was occupied for 3 years. My grandparents had tried to escape from China to avoid war, but still ended up suffering during the war.

Unlike Germany who had acknowledged and apologised for WWII atrocities, Japan has not. So this is the reason for such intense reactions in the Chinese community. But it is really too much.

EDIT: So it turns out that Japan has apologised for war atrocities.
https://en.wikipedia.org/wiki/List_of_war_apology_statements_issued_by_…

However, some controversial actions hinder the acceptance of these apologies by other Asian countries. For example, this does not resolve the Korean and Taiwanese bodies at the Yasukuni shrine, not returned to their original country.

And the Yasukuni shrine is huge, which includes a park. Kayano might just been to only the park section for all we know. There was a video, but it was taken down. 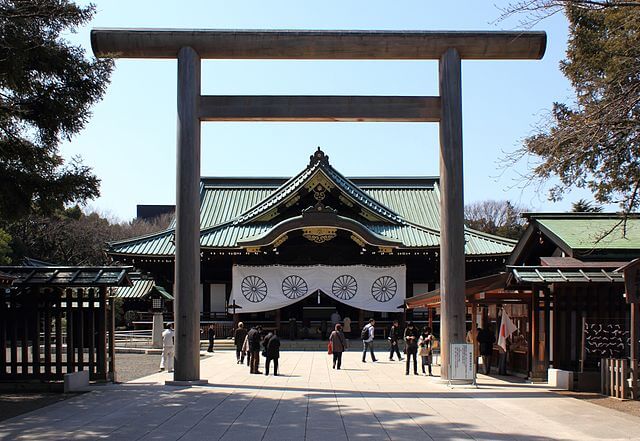 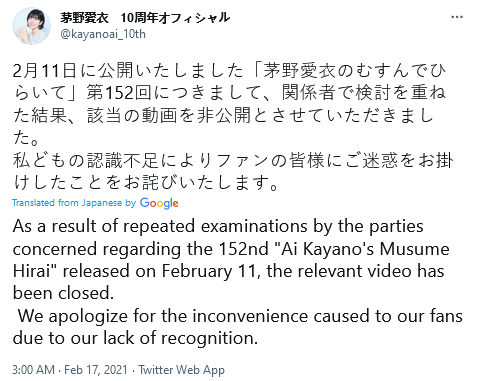 Soon after news of Kayano’s visit to the shrine was made public, Chinese social media users began to demand “the withdrawal of all the programmes in which she had appeared because there was “zero tolerance” over the issue”.

In response to the backlash, Kayano’s social media team announced on February 17th that the video had been removed and apologized to their fans for their “lack of recognition” regarding the shrine’s history.

Though the backlash against Kayano appeared to have died down following her apology, as neither her trip nor the enraged reaction it sparked made any further headlines in the following weeks, Arknights players recently discovered that the outrage campaign launched against the storied voice actress by Chinese nationalist players had ultimately resulted in her removal from the Chinese servers.

Did Kayano know of all this? We will never know. To the Japanese, the Yasukuni shrine is like other shrines. A place to pray and relax. However, it has such a different meaning to other countries which suffered under Japanese occupation. What's done is done, and consequences have happened. 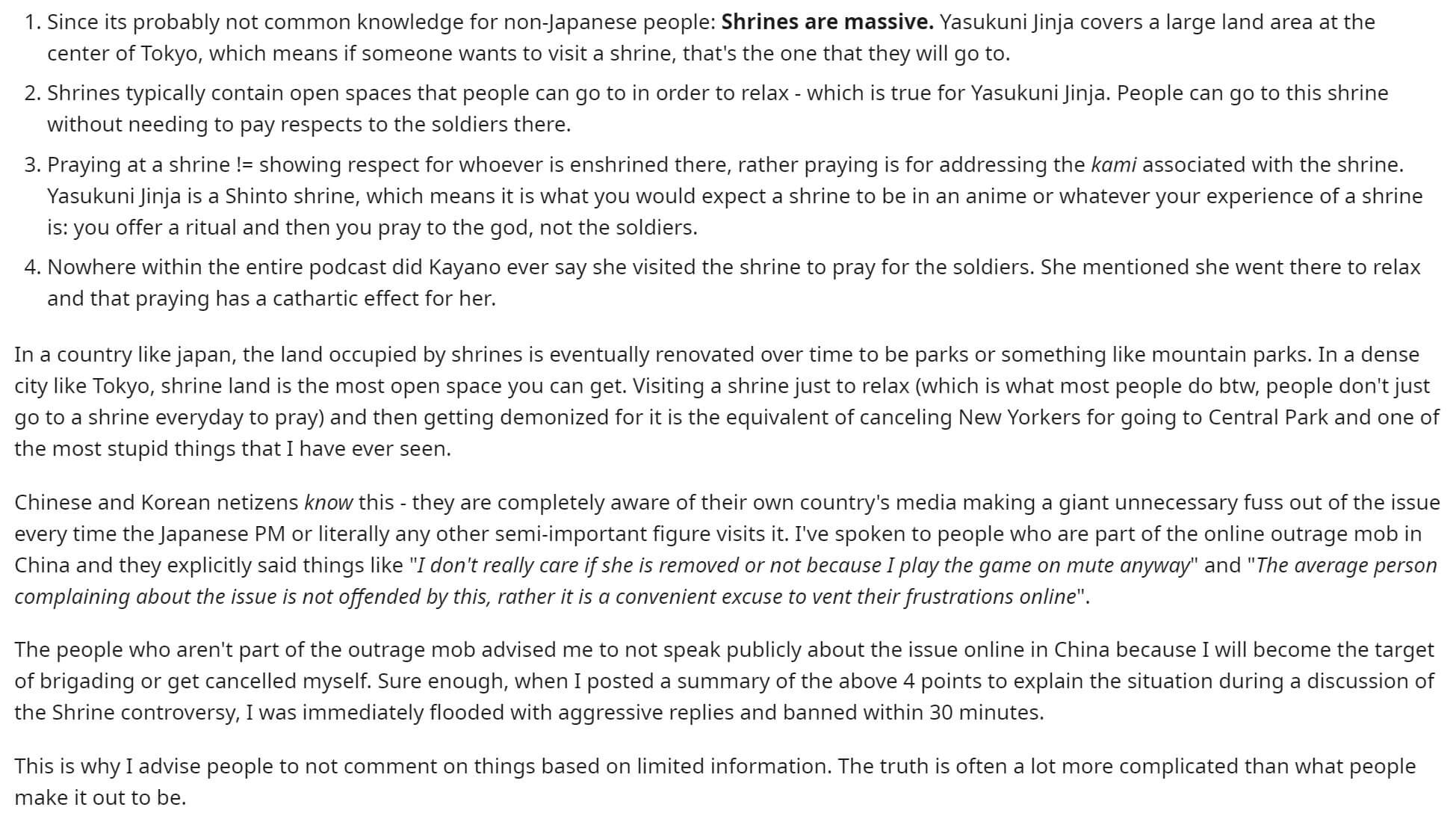 A comment that I had received during my initial discussion. This is an extremely complicated and political issue where both sides have their faults.

To dumb it down to 'haha China' is just not good.

Naturally, gross racist sentiments which are misinformed and biased will appear. Sinophobia has happened last year due to COVID-19. Before being racist, please learn about the reasons of why Asians are not alright with Japan glorifying WWII war criminals. Until their citizens are left in the dark.

Arknights is a Chinese game. Many games are from China. Genshin Impact, Girls Frontline, Azur Lane, Identity V, Onmyoji, Alchemy Stars are just what I remember from the top of my head.

So when Kayano's voice was first removed, many started blaming the government, the Chinese Communist Party (CCP). Especially when they have enacted controversial laws to limit the gaming industries.

However, it is due to all these things the CCP is doing, they sure do not have the time and effort to just target and bother one voice actress.

This is due to Chinese nationalists making noise. The CCP actually wants to quell nationalists because this would affect them negatively.

Therefore, the CCP has done questionable things, but they are not behind the removal of Kayano's voice.

Initially I thought it was the CCP behind this, until a Chinese friend explained this to me so I will inform all of you too. I may be Chinese, but I do not live in China. Since my grandparents had to move due to WWII. So I do not claim to understand China's politics and I will leave this as such. 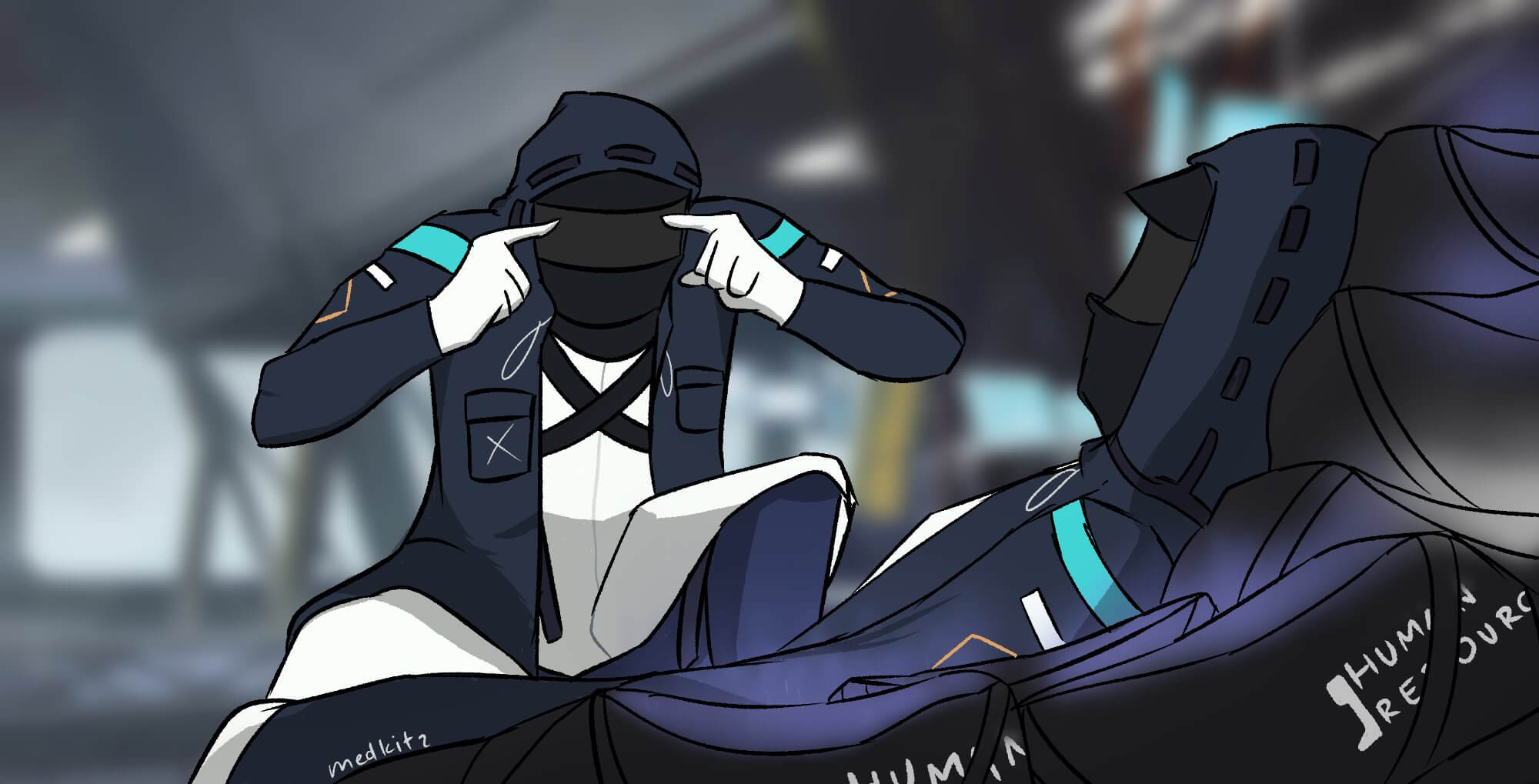 To end off: Think, Doctor, think! Please use your brain and get educated about issues. Both in real life and Arknights lore.

There's really nothing we can do about huge political issues, but all we can do is to be aware and remember history. Especially when Arknights is a game with historical references.

The best course of action is to forgive, but never forget. Which I believe is what the average person like you and me can do. And learn when new information is being presented.

It's a very unfortunate incident caused by the conflict two countries that have very strong propaganda and historical beef. Both sides have their faults, which was due to long time conflict that stems from WWII. In the end, Hypergryph is a victim that has done nothing wrong, yet they had to change voice actress in response.

I sincerely hope this is the first and last time this happens.

Arknights: Should You Pull? Standard Banner: Saga and Skadi