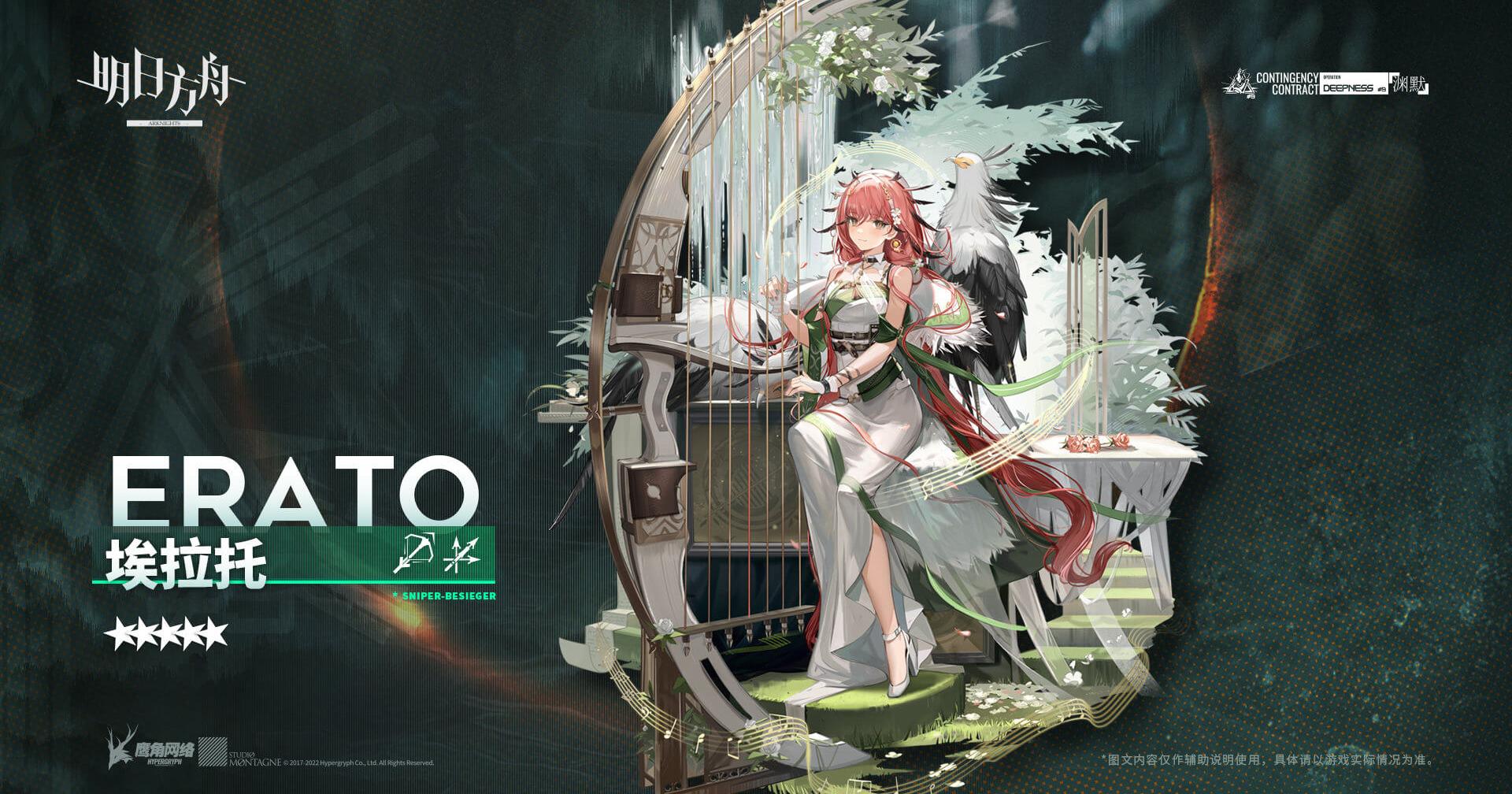 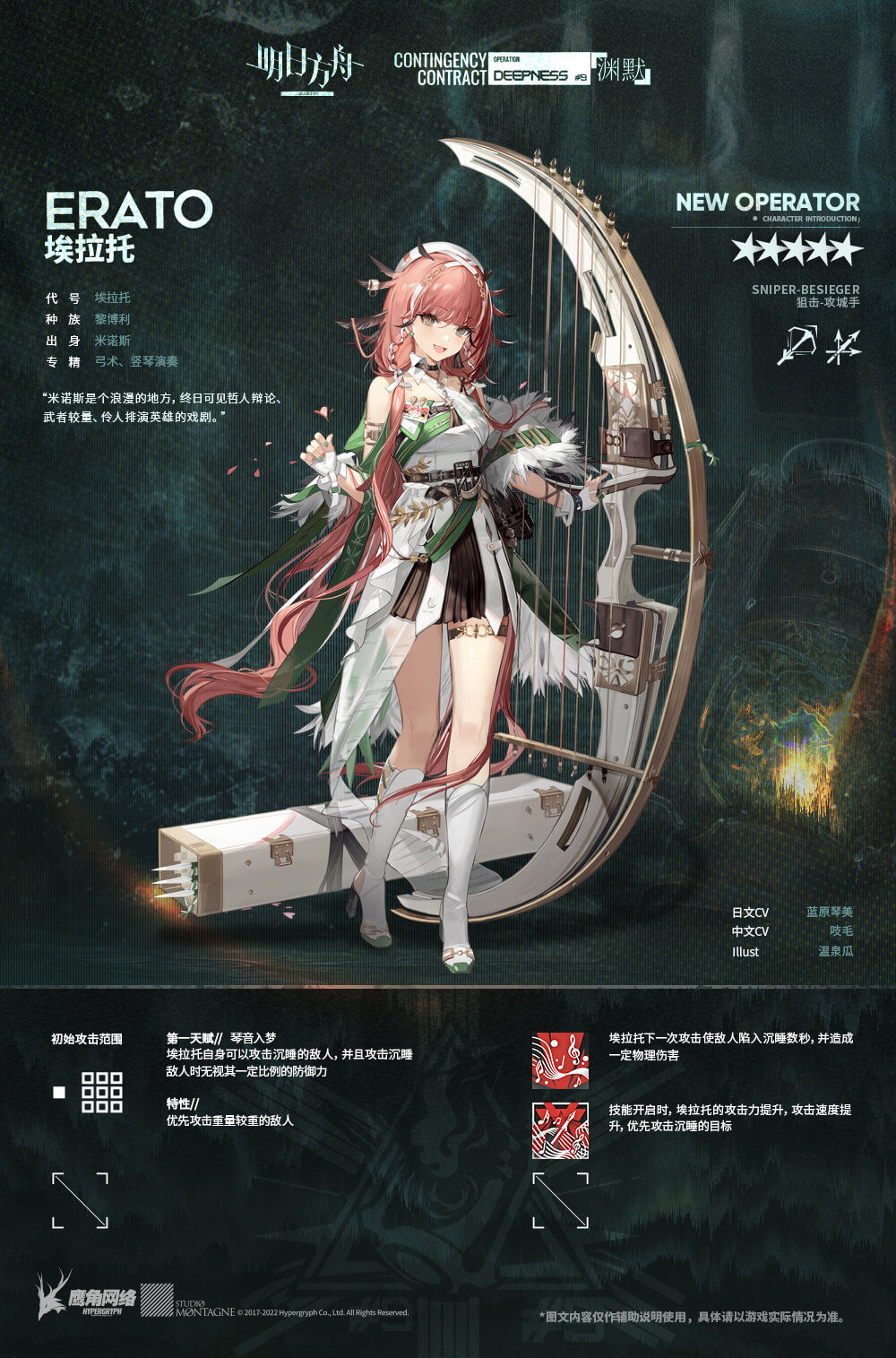 "This is Rhodes, eh? Finally here... no, this was a meeting conceived by the designs of fate - I should say that this is right on time! You can call me Erato. Might I ask if Pallas is here?

"Do you feel like we've gotten more requests for time off this month?"

"Maybe it's cause it's spring, and people are getting colds as the season changes?"

"Have a look at these forms. How many of these are for sick leave? Look at this, "need to take care of affairs at home", "need some time off to adjust personal condition for working", and this one's more direct, "I want to go outside".

"You know what I've discovered? All of this has happened after that Liberi girl came to Rhodes."

"You mean Erato? She's making everyone take things too hard?"

When the operators of the HR department sought out Erato, questions in their mind, they found her in the infirmary courtyard, plucking away at her harp, telling of her fascinating travels to a room full of operators. After sitting and listening for a good two hours, these HR employees finally understood from whence the tide of holiday request forms came.

"To search for spectacles beyond one's horizons - is that not the nature of man? Be at ease, and listen to a little story of mine, if you will. All those bothersome things can wait till tomorrow. Hmm, could you maybe call this... believing in tomorrow?"

Proficiencies: Archery, performance of the harp

"Minos is a truly romantic place. Day to night, one can see the debating of scholars, the sporting contentions of warriors, and the dramatics of entertainers, posing as heroes."

Erato is a 5★ Sniper [Heavyweight / Besieger] whose kit is focused around the Sleep mechanic.

Skill 1: The next attack inflicts Sleep to the enemy for several seconds and deals a certain amount of Physical damage.

Erato will be the third Sniper [Heavyweight / Besieger], and the next Operator to have a kit focused around the Sleep mechanic. Her impact as an operator will largely depend on her Interaction with the Sleep meta and other Sleep focused Operators.  Currently in the meta, Sleep is largely used for stalling, often for long durations. The most relevant Operators used are Blacknight,  Kafka, and Blemishine.

Her S1 is in on-attack skill that applies Sleep. This makes it useful for consistent short term stalling of a single target. However,  the duration will likely be short, and it cannot be used on demand, which limits its usefulness in meta-applications.  One of the biggest drawbacks of using Sleep as a crowd control method is that most allies will not be able to damage the Sleeping enemy, limiting it usefulness in traditional team comps.

Her S2 is an on-demand skill that increases her DPS and prioritizes sleeping enemies. Notably this Skill does not apply the Sleep status itself, so it seems meant to be used along with a different operator that can apply the Sleep.  This does help to get around one of the drawbacks of Sleep that was mentioned earlier, in that most Operators cannot damage the enemies being stalled by Sleep.  It is unclear however, if she can provide high enough damage output to be useful in most current meta-applications of Sleep stalling. 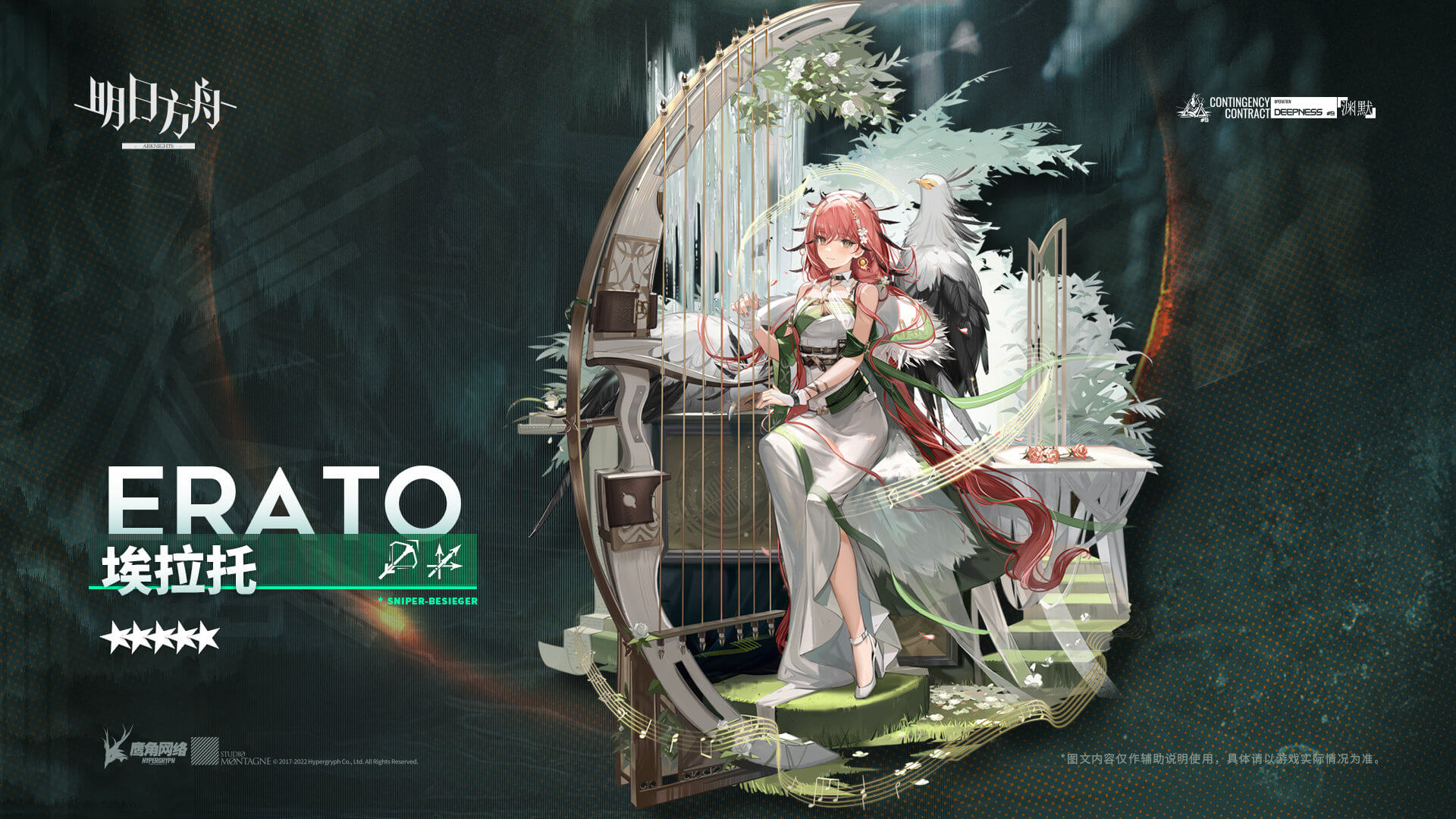