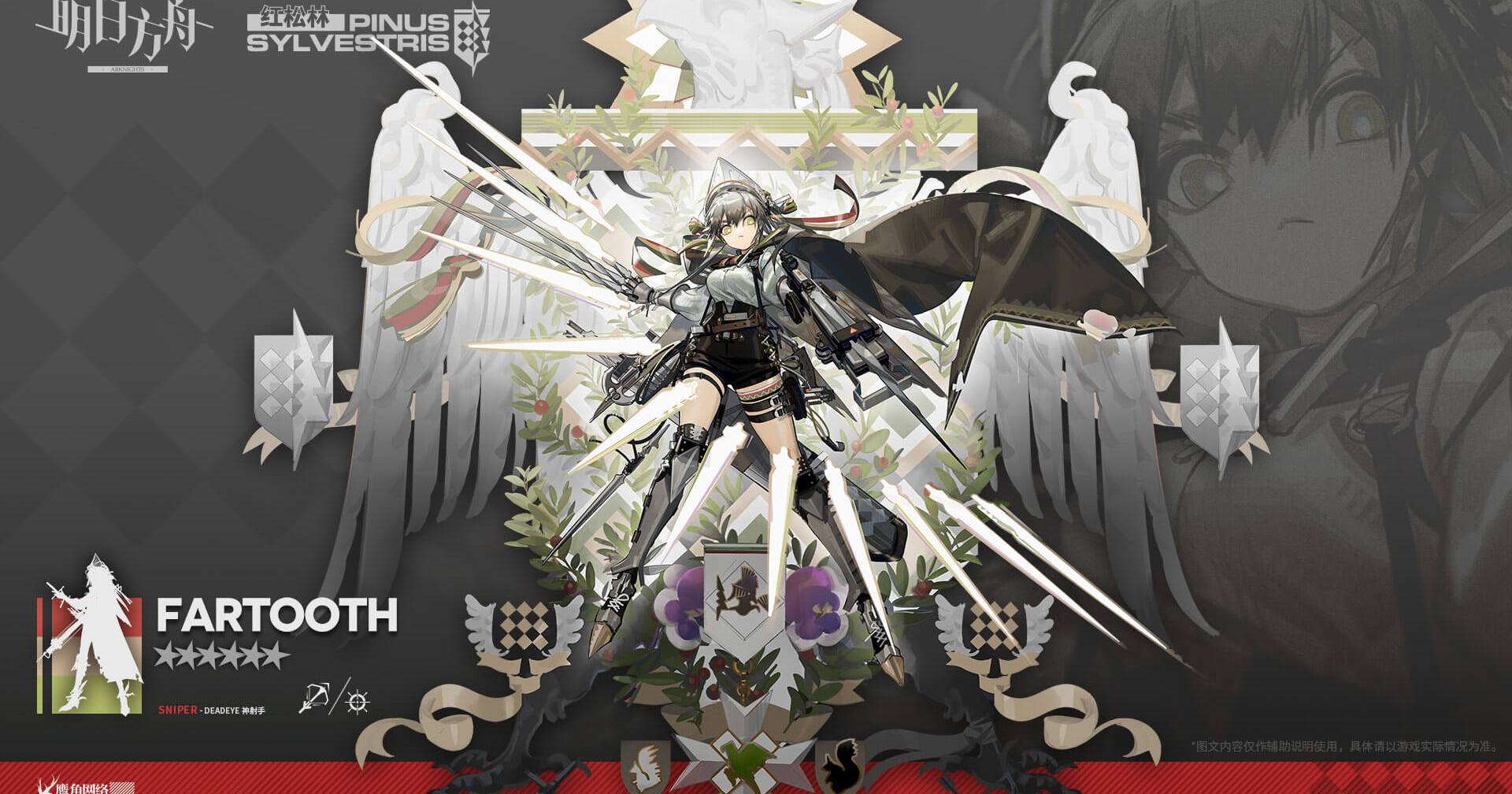 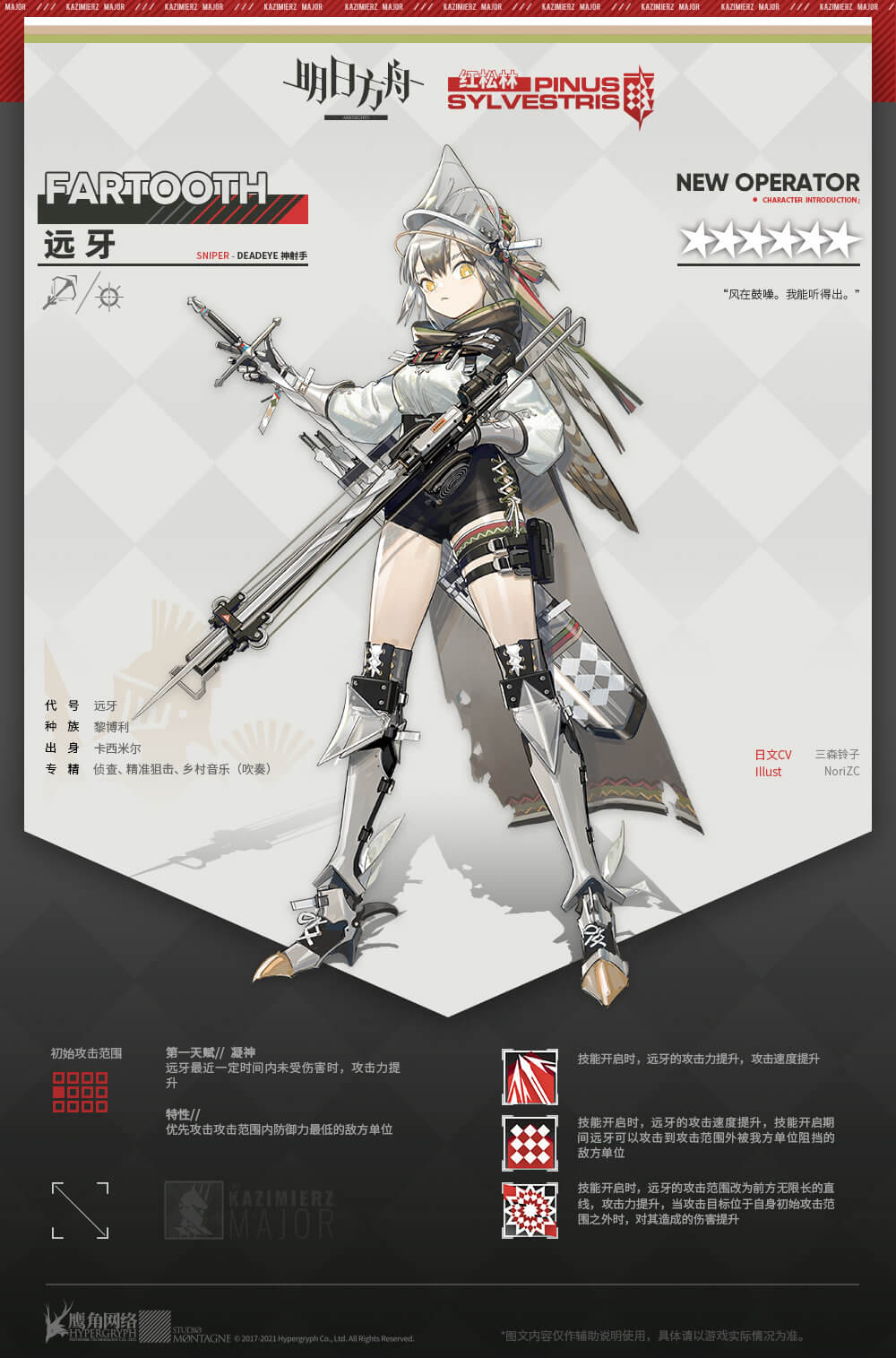 “Pinus Sylvestris Knight, “Fartooth” Justyna, you can just call me Fartooth. I’ve heard of Rhodes Island, and about you, Doctor.”

While not as imposing or famous as the Champion of the Knight Majors, the Radiant Knight, or the Blood Knight, this Infected knight who have won the the attention and hype of many in the arena with only her skill and exciting performance, and have received her title during the preliminaries, is not to be underestimated.

“Fartooth” Justyna. I’m sure everyone who watches the Kazimierz Majors has more or less heard of her. We saw the news about her assault and the National Council’s criticism of this violence; we all know now that the assault was real, but the supposed acts of violence against fans and audiences is complete nonsense.

She is no longer an independent knight.

“Fartooth” Justyna, she is now a member of Pinus Sylvestris - A Knight Club of Infected knights.

Talent 1: When Fartooth has not taken damage within a certain period, increase ATK

Skill 2: Increase ASPD. Fartooth can attack enemies that are blocked by allies outside of her Attack Range

Skill 3: Change range to a straight line ahead with infinite range. Increase ATK. When attacking an enemy outside of her default Attack Range, increase damage dealt.

Fartooth is the first 6 Star addition to the Deadeye Sniper Archetype (this Archetype was formerly called Long-Range Sniper by fans until an official name was included with Fartooth's introduction).  Fartooth's kit looks to be an amped-up version of Ambriel, with both her Skill 2 and 3 having "infinite range" elements.

Her S2 allows her to attack blocked enemies outside of her attack range, and her S3 allows her to hit any enemy in a straight line in front of her, no matter the distance (unlimited range Scwharz or Ifrit anyone??).  S3 even gives her a bonus if the enemy is outside her normal range.

Deadeye Snipers typically have high ATK values, but their DPS is held back by extremely slow ASPDs.  S2 addresses the ASPD issue by increasing it, and S3 looks to address the issue by just ramping up the ATK and damage even more.  Whether the kit can overcome the typical Archetypal weaknesses will depend on the exact details, modifiers, durations etc.

Talent 1 is an ATK buff that should be fairly easy to keep active, since this isn't an archetype that you would typically want taking damage.  Talent 2 we won't know until she goes live.

Overall, Fartooth will likely bring a combination of range and firepower that no other Operator can match. 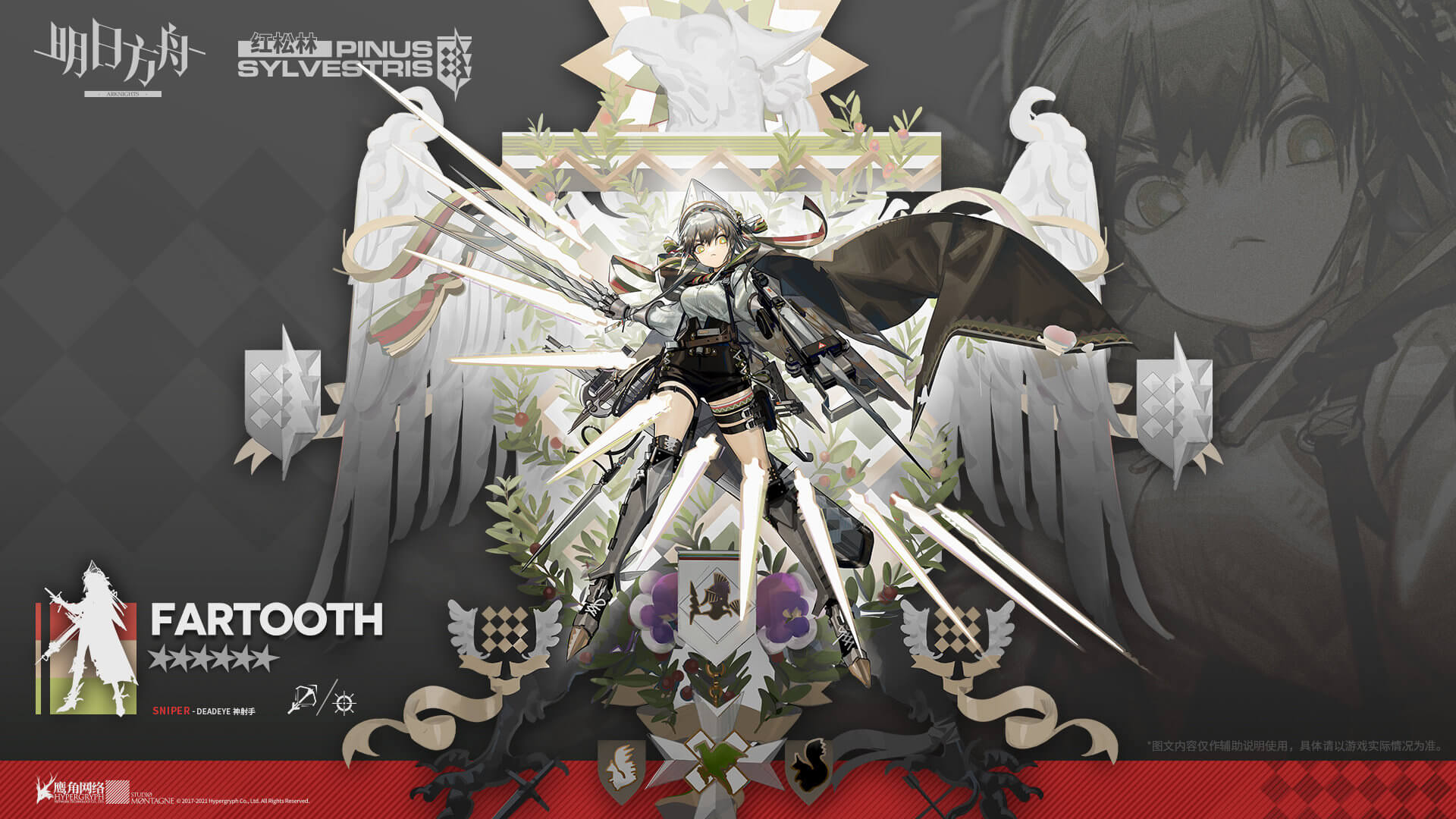