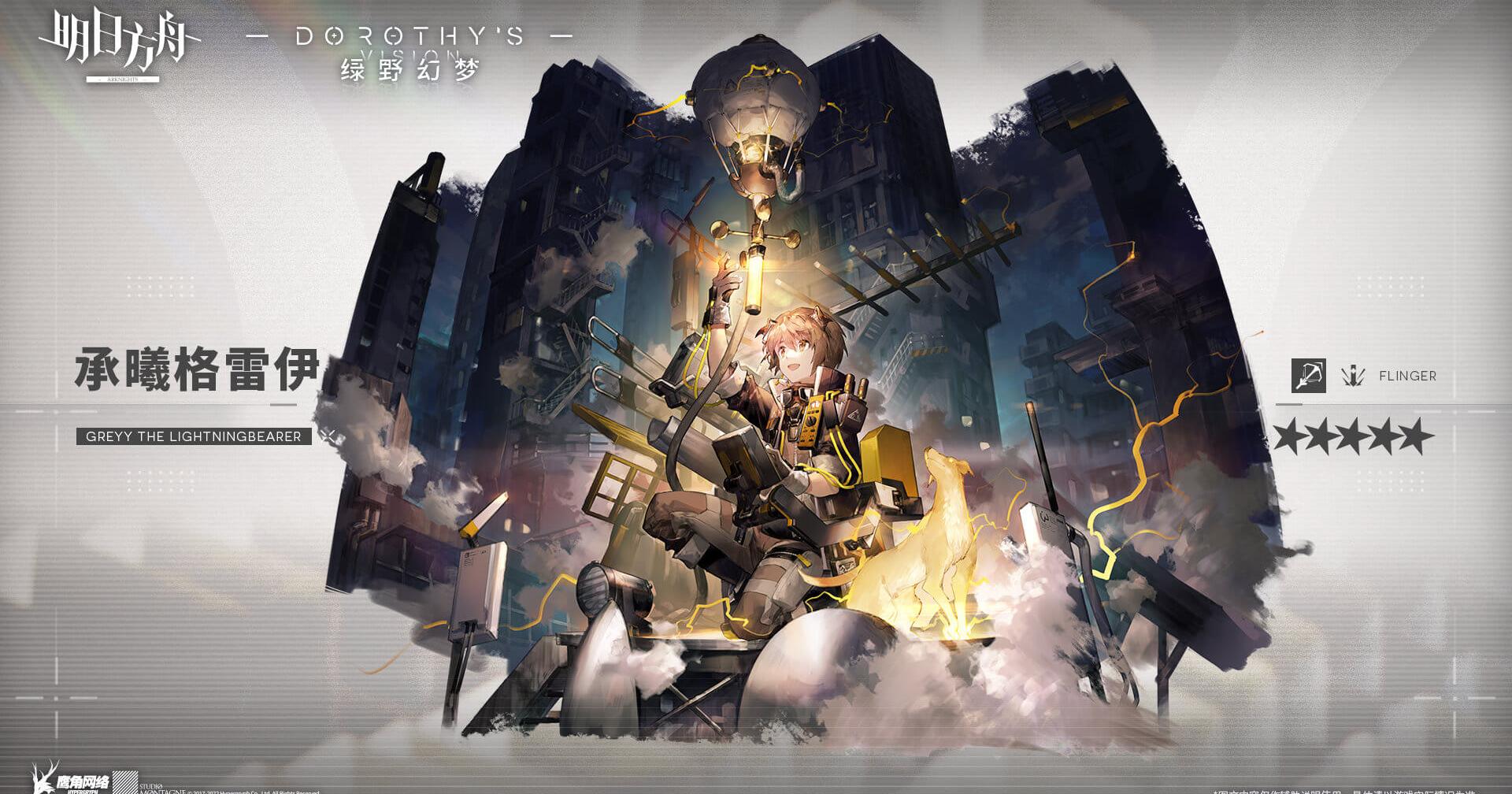 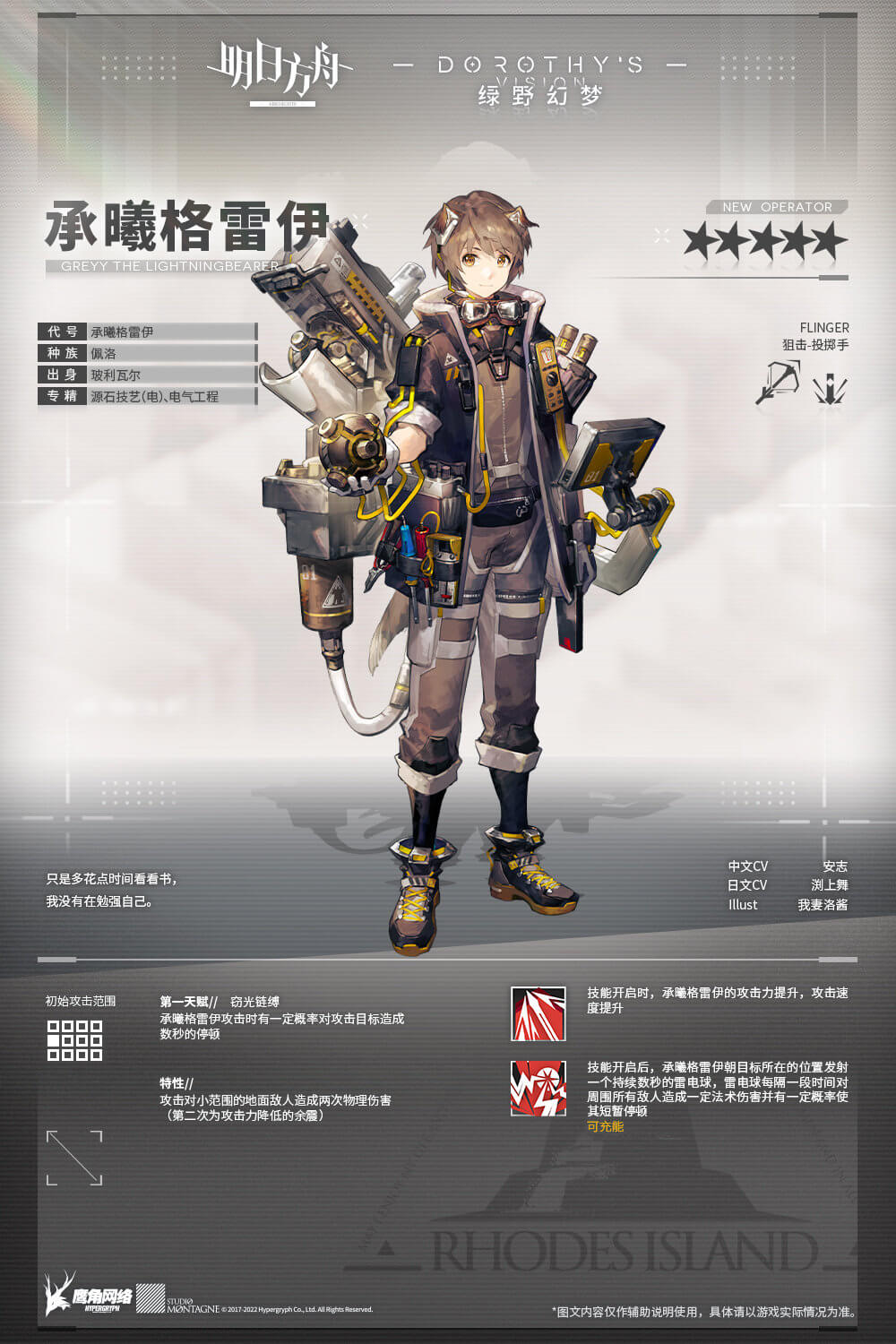 "Hello, Doctor. This equipment is my graduation design. Actually, I haven't thought to design it as... Eh? Add to squad? T-This is how the Doctor reviews defense as said by Miss Closure..."

How? This mission has been postponed, have you encountered any trouble? Heard Dr Silence say that you overused Originium Arts?

Come, don't stand there. I'm not scolding you. I know that it's not easy working on the field. Sit down for a while and drink a supplement.

'Just spending more time to read. I'm not overworking myself.'

Greyy The Lightningbearer is a 5★ Sniper [Aftershock / Flinger]  , an Archetype that only attacks ground enemies and deals two instances of damage on each hit.  His kit focuses on Slowing enemies.

Trait: Attacks deal two instances of Physical damage to ground enemies in a small area (The second instance is a shockwave that has half the normal ATK)

Talent 1: Attacks have a certain chance to inflict Slow for several seconds

Skill 1: When skill is activated, increase ATK and Attack Speed

Skill 2:  When skill is activated, Greyy fires a ball of lightning towards the target's position which lasts for several seconds. The lightning ball periodically deals a certain amount of Arts damage to all nearby enemies and has a certain chance of inflicting Slow for a short duration. Can hold charges

Greyy gets an up-Greyy-d! His new alter form, Greyy The Lightningbearer will be a 5★  Sniper [Aftershock / Flinger]  , only the second of this Archetype to be introduced (with Rosmontis being the first and only until now).  Greyy is a fairly weak 4 Star Operator, so there will be no issues for those interested in using the Alter replacement.

The Aftershock Sniper Archetype only hits ground enemies, and does 2 instances of splash damage for each attack, with the second instance being weaker.  The ground-only restriction for a Sniper seems to be unintuitive and unpalatable for a lot of players. However, their physical splash damage can be great for clearing out low DEF waves.  This comes at the cost of a relatively high deploy cost, and they fall off quickly as enemy DEF rises.

Greyy Alter's kit very clearly is focused on applying the Slow debuff, as his Talent gives a chance to apply it on each attack, and his S2 gives an additional chance of inflicting AOE Slow for a short duration.

It feels like the Archetype's slow ASPD, along with the Slow application not being 100%, is going hurt his reliability in the crowd control department.  Considering the glut of Operators that apply multi-target crowd control more reliably, and with less attack restrictions, it seems unlikely he'll make a strong roster impact for any players. 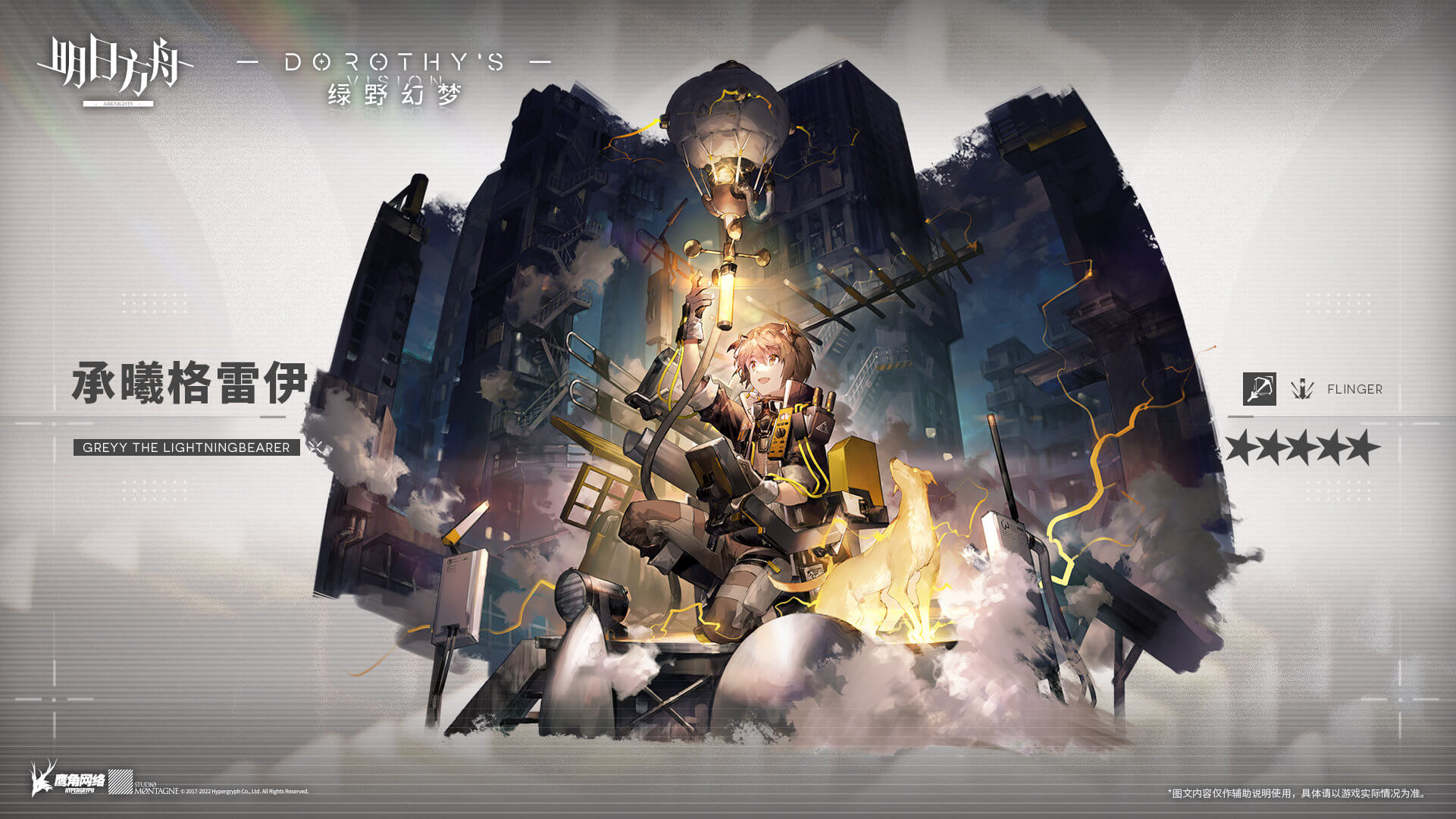