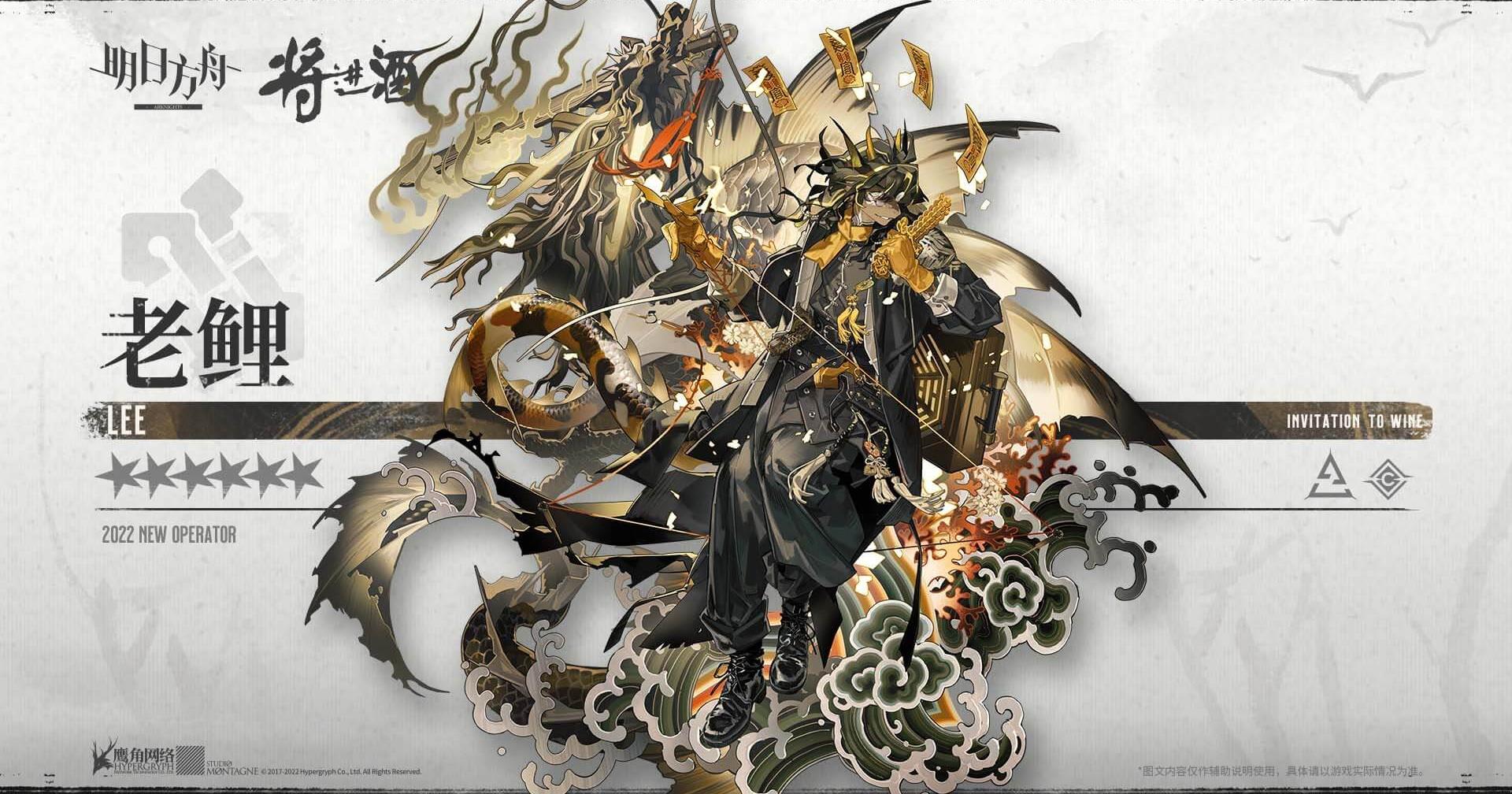 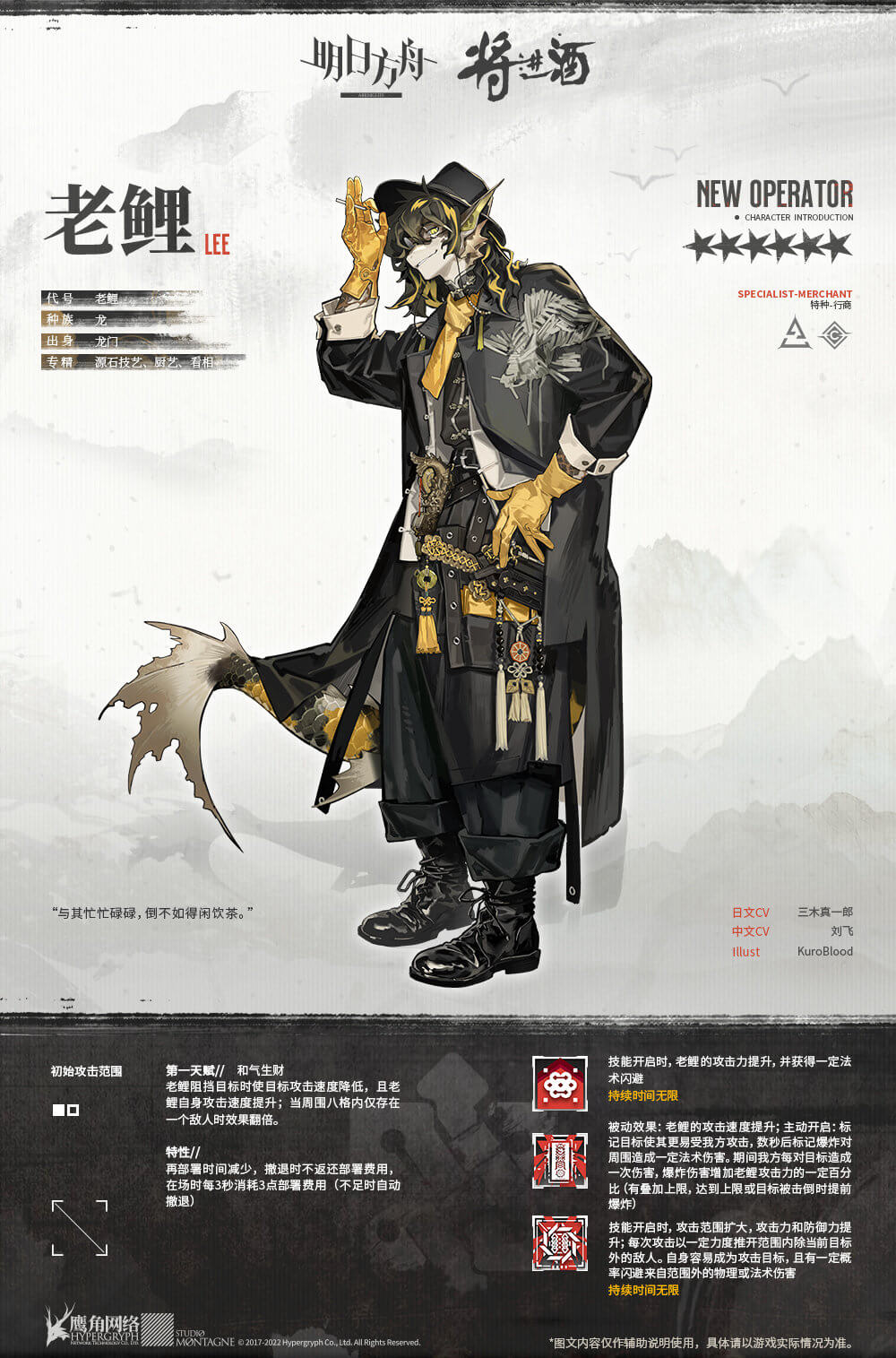 "Thank you for taking care of my employees. They didn't cause you any trouble did they? Right, this is the agency's business card, please keep it."

"Eh? Lee is here too? Doesn't that mean the agency's utility fees for the past couple of months went down the drain?"

"He's got to be here to slack off. Really now, when will he get more diligent..."

"If he has nothing to do, I hope he can help out in the kitchen."

None of the three Operators from the detective agency were happy in the slightest when they heard that Lee arrived at Rhodes Island. Lee on the other hand kept sighing with a long face, three gifts in hand.

"The kids have grown up with their own lives now. It's a good thing, a good thing... Doctor, I'm feeling down today, don't bother me with work, we can talk tomorrow." Lee said as he sat down in the Doctor's office and made a pot of tea.

Have to say, Lee's tea is really good.

Lee is a 6★ Specialist [DP Drain / Merchant] with a varied kit that includes offensive, defensive, debuffing, and self-buffing abilities.

Trait: Has reduced Redeployment Time, but DP Cost is not refunded upon retreating; While deployed, 3 DP are consumed every 3 seconds (automatically retreats without sufficient DP)

Talent 1: When Lee blocks an enemy, reduce their ASPD and increase self ASPD. If there is only one enemy within the surrounding 8 tiles, the effect is doubled.

Talent 2: When DP is consumed by Trait, if there is sufficient DP, consumes an additional amount of DP to block the next Stun/Freeze on Lee, and Stun the attacker for a certain period instead

Skill 2: Passive: ASPD +30. Active: Mark the target and place Taunt on them. The Marked target explodes after 5 seconds, dealing 300% Arts damage to nearby enemies. Within the skill duration, for every attack the target receives from ally units, increase the explosion damage by 20% of Lee's ATK (stacks up to 30 times, prematurely explodes if the limit is reached or the target is killed)

Skill 3:Expand Attack Range. ATK and DEF +50%. Attacks push all enemies within range (except the current target) away with small force. Lee gains Taunt and has 70% chance to Dodge Physical and Arts damage coming from outside his range. Infinite duration.

Lee is the first 6 Star of his Archetype, the other two being 4 Star Jaye and 5 Star Mr. Nothing.  They have low DP costs and high stats at the cost of requiring steady DP payments to keep them deployed.

Lee's kit varies a lot between the Skills, and his strengths seem like they will be situational. His Talent 1 favors using him as a blocker, increasing his own ASPD and reducing the blockers ASPD when he is blocking.  The effect is doubled when there is only 1 nearby enemy, potentially useful in low flow lanes or when there is a single strong enemy that can be tanked away from other enemies or paths.  His Talent 2 could be quite useful against enemies that Stun or Freeze, allowing him to negate the effect every 3 seconds, and return a Stun, provided there is enough DP.

Skill 1 supports his use as an Arts damage soak. S2 appears to be his most offensive skill, increasing his own ASPD and turning his target into a time-bomb.  S2 relies on team support to maximize its potential, since the explosion damage increases the more times it is attacked during the duration.  This is helped by the taunt he places on the enemy, causing allies to prioritize it.  S3 increases his attack range and ATK and DEF, and pushes away all enemies except for his current target.  He gains high Arts and Physical Dodge from attacks outside his range, making him a great ranged damage soak.

Lee's kit seems to be quite niche, so it seems unlikely to make a significant impact in the meta for general use, though it is really hard to tell until we see the numbers and how he fares in practice.  However, his varied and unique kit will certainly appeal to Doctors who like to experiment with tactical and unique strategies, and his specific strengths could find use in challenging content in specific cases. 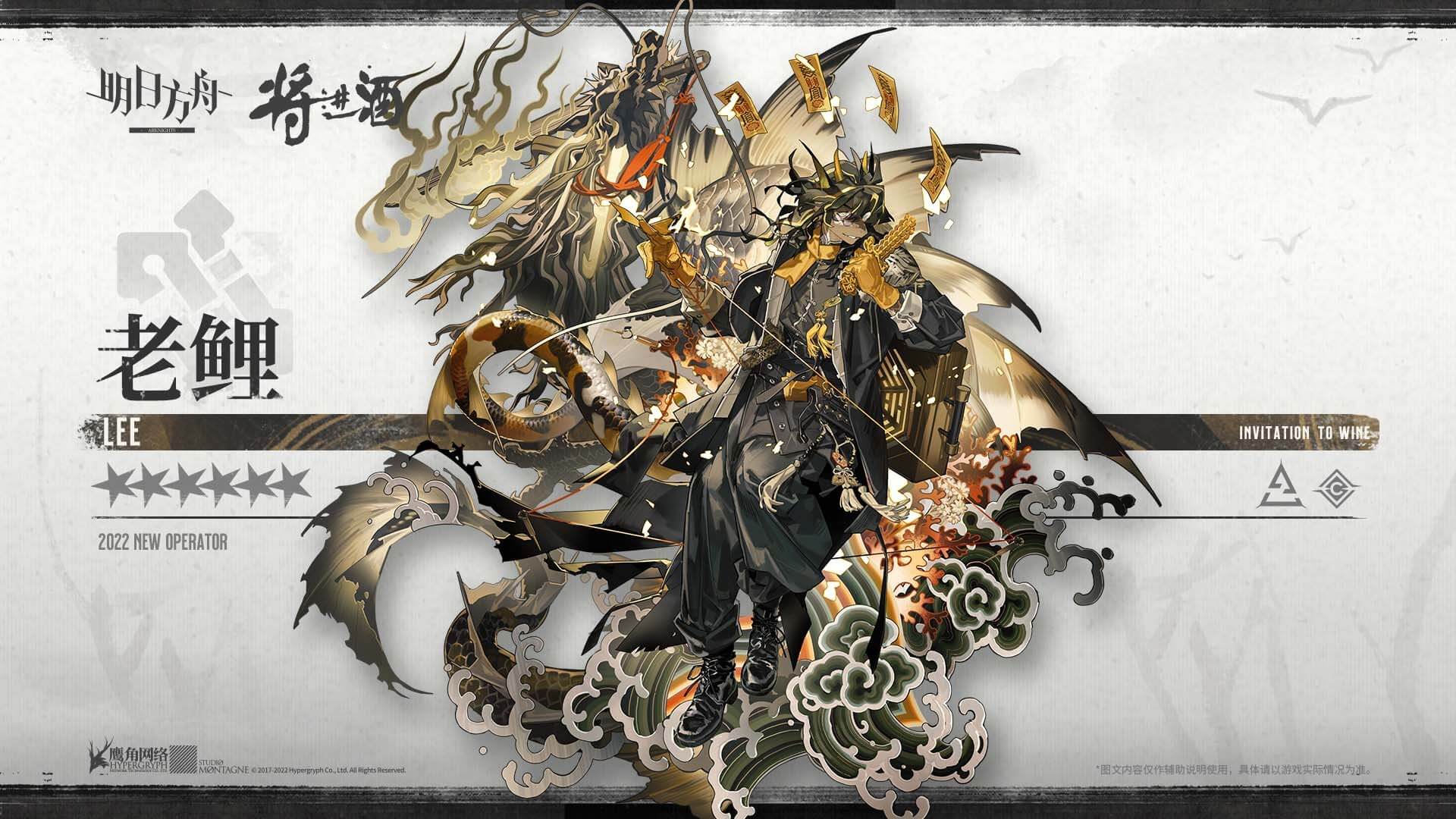