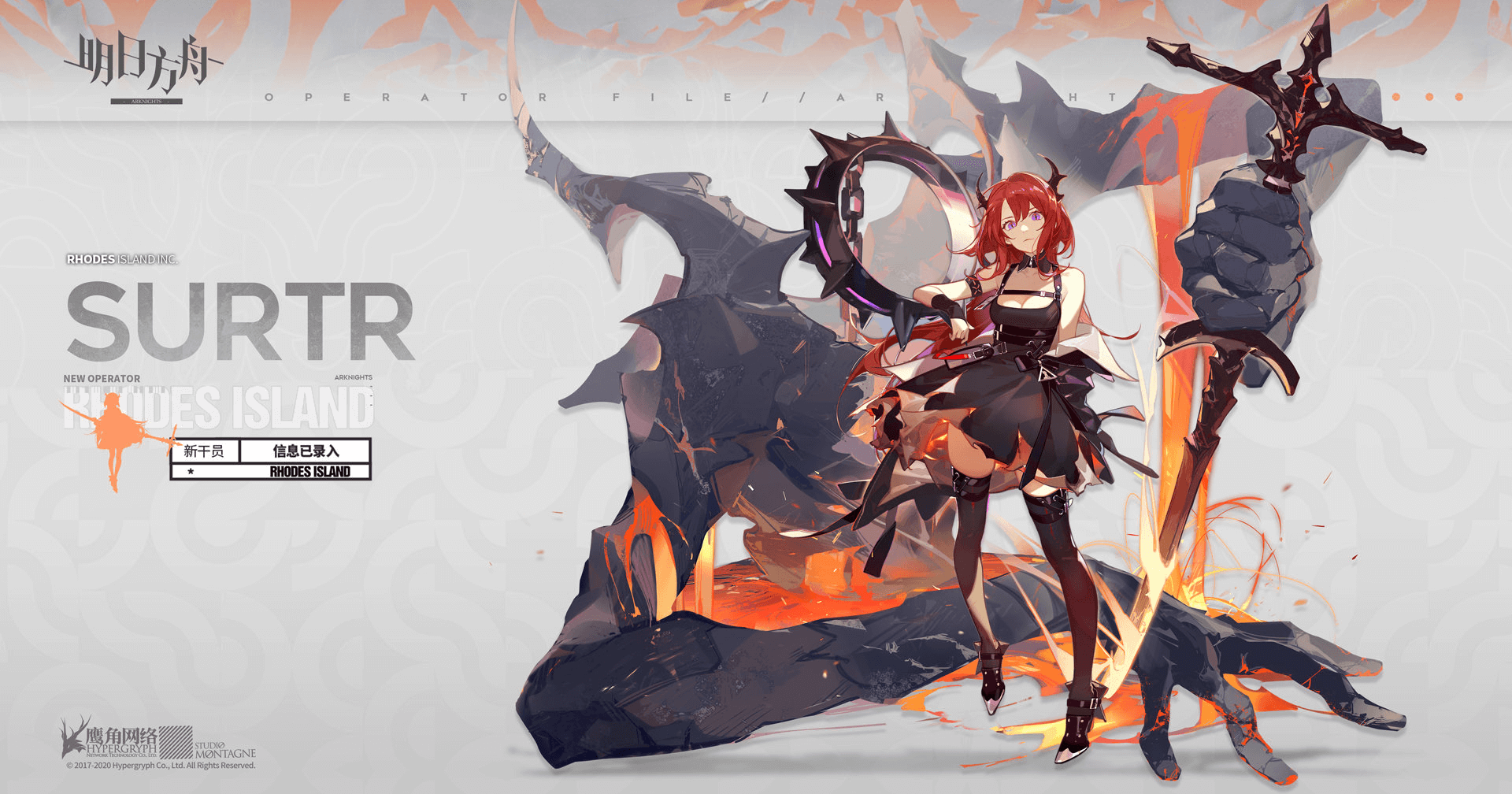 She's Too Hot for You 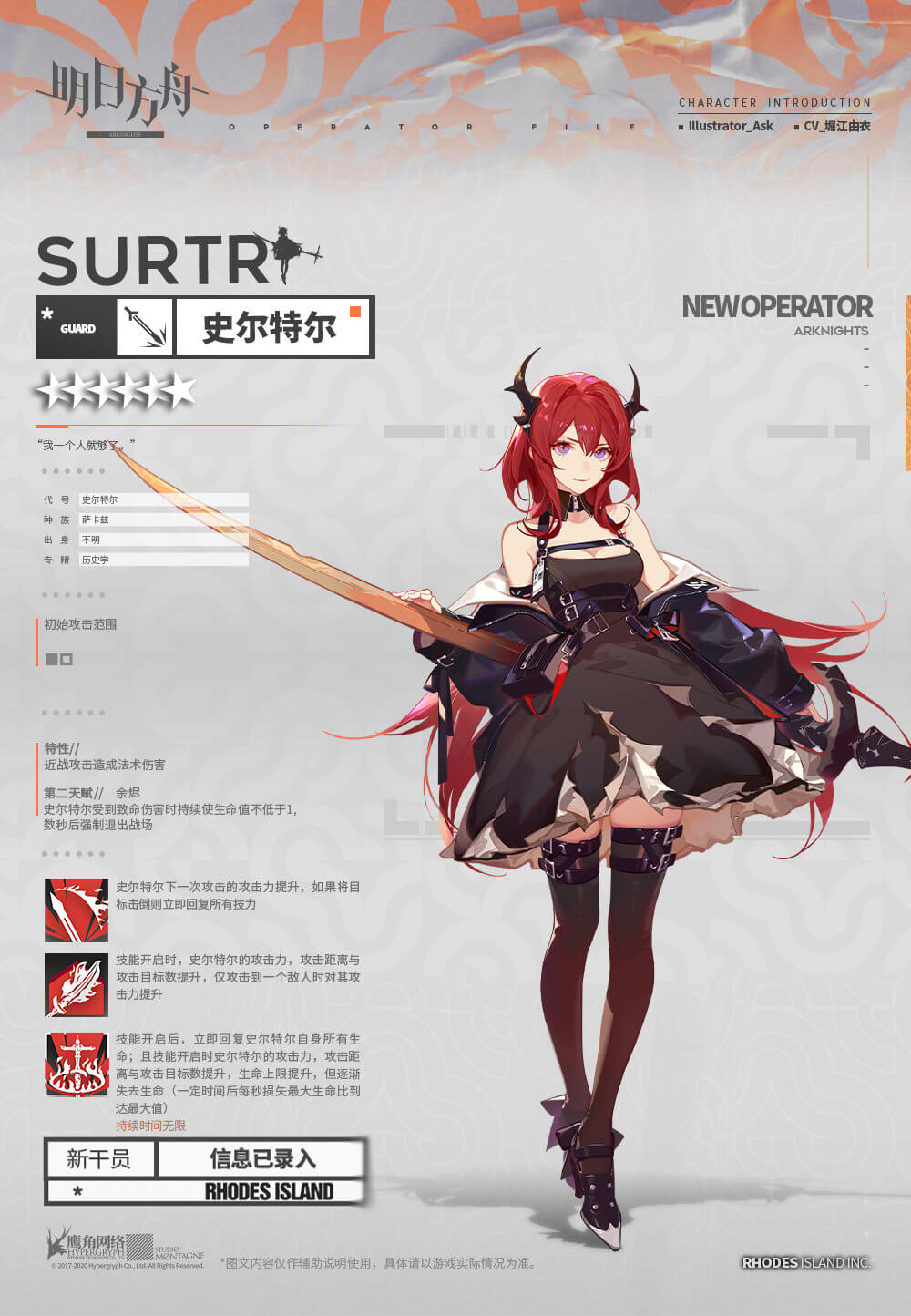 "I'm Surtr. Are you the Doctor they spoke of? From now on I'll be working at Rhodes Island, hopefully you won't let me feel bored."

A Sarkaz girl with a blank past. Almost unable to use Originium Arts, and her physical aptitude is quite average, but she has excellent performance in combat. According to the testing operator's feedback, this is connected to her two-handed sword. Whimsical, carefree, wandering by herself all day, no one knows what she's looking for. All they know is that she has a record book, filled with nonsensical location names. When she arrives at a place, she'd speak to herself, and cross out one of the names. She wouldn't belittle someone without reason, but her attitude during conversations is not friendly. It is somewhat difficult to communicate with her. However, things might change if you bring ice cream with you?

Surtr is a 6★ Arts Guard with a death-defying Talent , and Skills that bring multi-target fiery pain to her enemies over an extended range.

Talent 2: When receiving fatal damage, continuously prevent HP from going below 1, and retreat from the battlefield several seconds later

Skill 1: The next attack has increased ATK. If the target dies, recover all SP.

Skill 3: On skill activation, immediately recover all of Surtr's HP. During skill activation, increase ATK, attack distance, attack target count and Max HP, however, continuously lose HP (after a certain period, HP loss percentage stops increasing). Infinite duration. (Note: The CN description is a bit vague, so the precise details may not be known until it is live)

Have you always wanted a Melee Ifrit?  Then this might be the Operator you've been waiting for!  Surtr will be our first 6★ Arts Guard, meaning she deals Arts damage with her attacks instead of Physical.

Her S1 is a single target skill that refills its SP if the target dies, which could make it excellent for times consistent damage is preferred, like when facing a steady stream of enemies.  S2 dials things up by extending her range and target count and boosting her ATK.  It seems like this one might be manually triggered, making it good for burst situations, and the fact that ATK is boosted further when attacking only one target makes it very versatile for any situation.

S3 looks to be the melee Ifrit Skill.  It is an infinite-duration Skill, and other Skills of this type that we have seen have been very strong (see Blaze and Thorns).  When the Skill activates, her ATK, attack distance, number of targets, and Max HP all increase.  The downside is that she continuously loses HP while the Skill is active, though this is compensated for at least somewhat by her regaining full health when the Skill activates.  It appears like healing support will be necessary to keep her alive once she starts to unleash her fiery fury.

Overall, there is every reason to believe she will be a strong 6* that will competently fill a useful role. 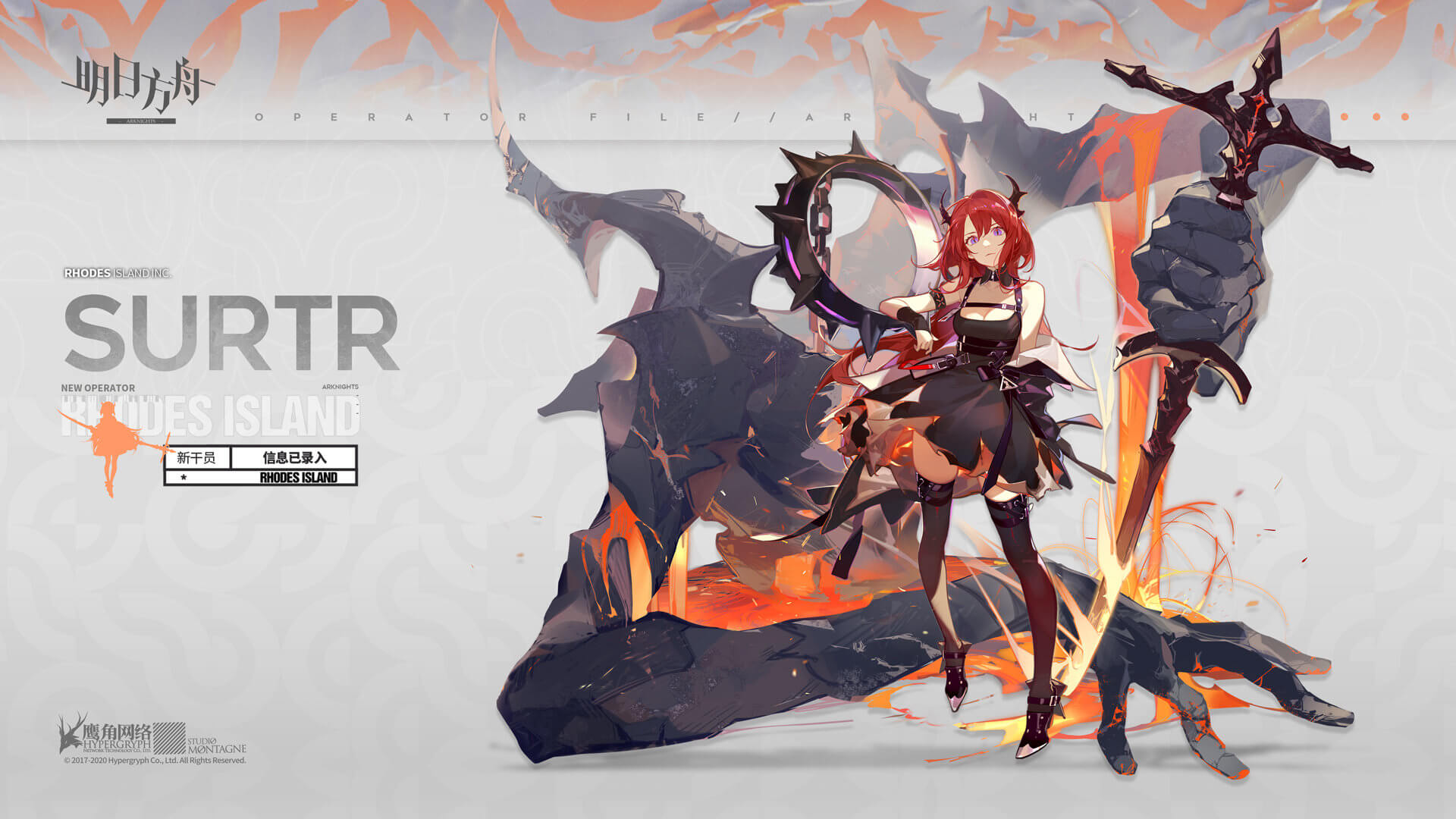 Arknights PSA: Do Your Annihilation Before the Event Starts!

Twilight of Wolumonde Event Help
Hey guys, here are my guides for the first week of this amazing event, in case someone…
Feeling Devastated With Ayerscarpe
More than 30 pulls and still no Ayerscarpe…why? Im not even rolling for Suzuran…please…
Who's to build next?
I’m so confuse who’s to build next, is there any suggestion from you guys image1355…
Completely lost as to how to build a team
So I’ve been being torn back and forth on teambuilding in AK and I’m starting to think…
PSA: Complete your weekly Annihilation runs before [Twilight of Wolumonde] event comes
The official Global account confirmed that [Twilight of Wolumonde] event drops on…
Read More