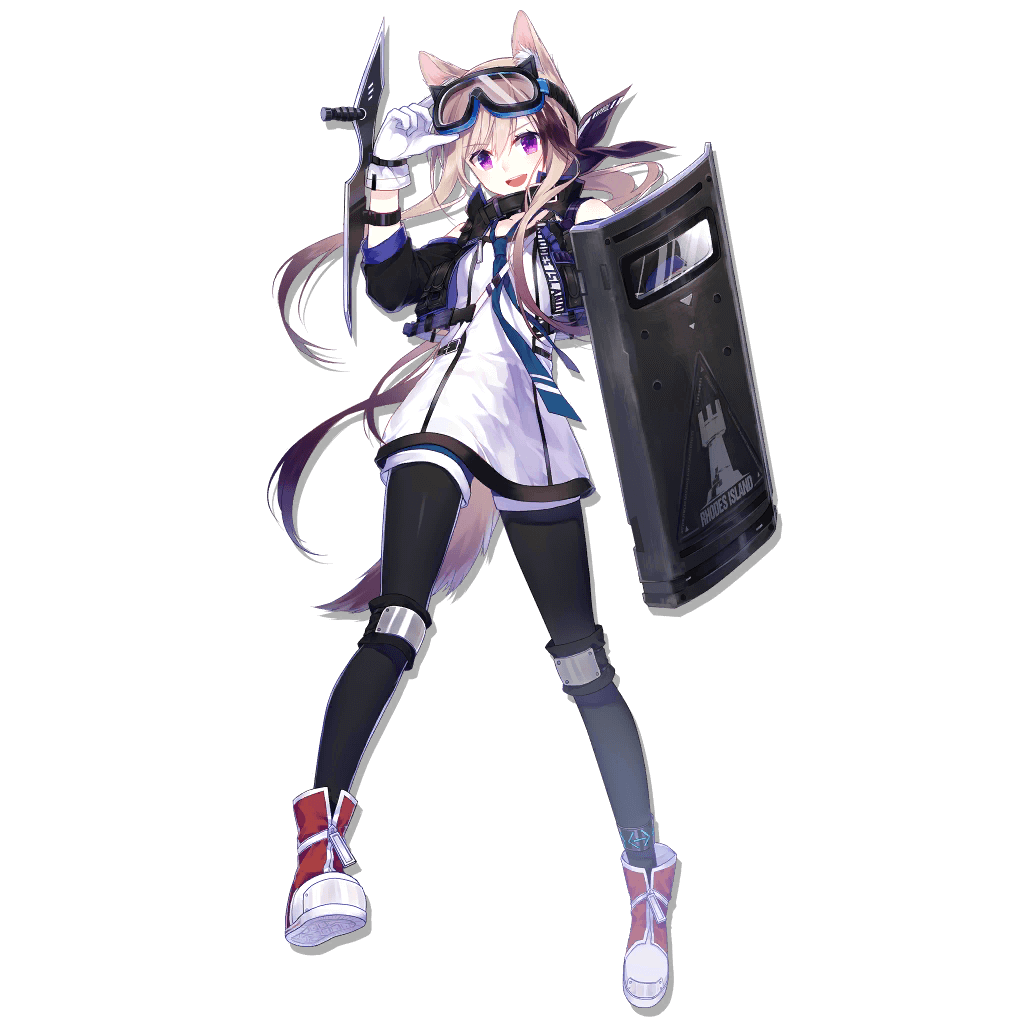 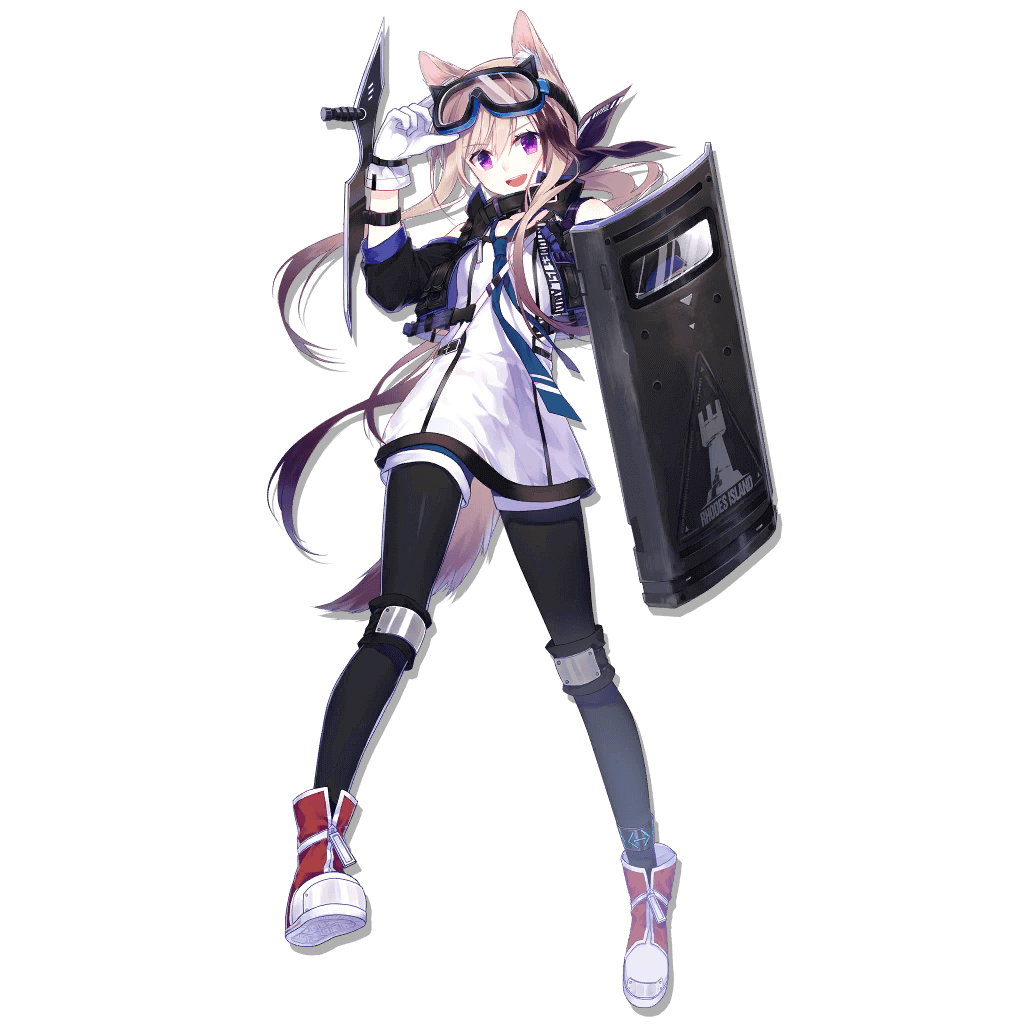 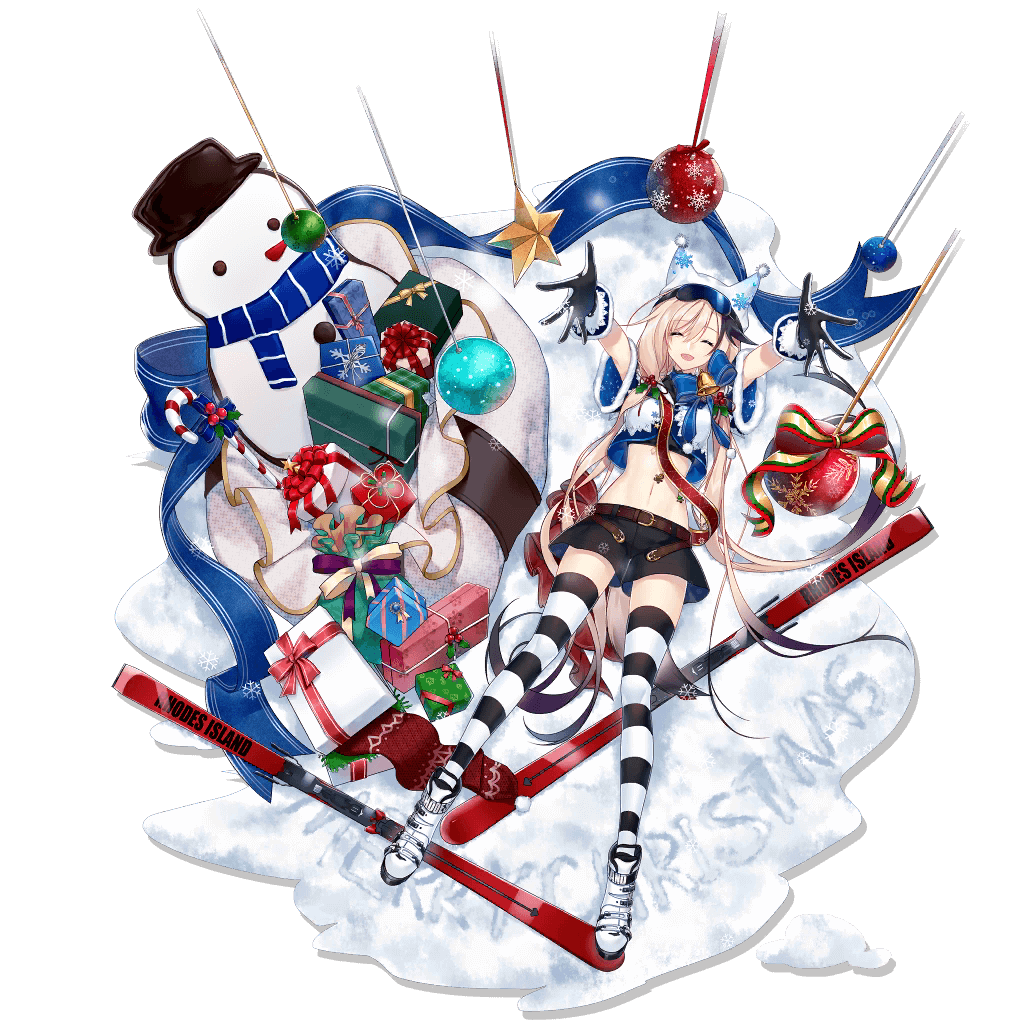 Cardigan, Defender Operator of Rhodes Island, will run to the battlefield to provide reliable defense for the squad.

If only she could quiet down for a while... 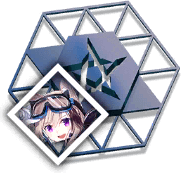 Cardigan's Token A sled made of hard wood. It makes you look forward to seeing snow.
Potentials

When this Operator is assigned to a Factory, capacity limit +6 and productivity +10%
Liveliness Lvl: 1

When this Operator is assigned to a Dormitory, restores +0.2 Morale per hour to another Operator assigned to that Dormitory whose Morale is not full (Only the strongest effect of this type takes place); furthermore, self Morale recovered per hour +0.4

+ Good HP, especially if you max Trust and Potential
+ Useful on some early-game Challenge Modes with her self-sustain
- A DEF-focused Defender is almost always preferable to an HP Defender except vs Casters, and against them Healing Defenders are usually best.
- Harder to max potential because she is not available in recruitment.

“Heeellooo! I've never been in such a huge mobile facility before! I'm so excited! Merry of the Cardigan here. Are you the Doctor?”

A skiing fanatic and a former member of the Leithanien Bobsled Patrol Team. Clumsy but cheerful, Cardigan supports Rhodes Island’s Team A4 as a 3* Defender with an emphasis on HP.

Perhaps as a representation of her boundless energy, Cardigan’s Talent, Max HP Up, passively increases her maximum HP after E1 promotion. This works well with her Skill, Regeneration α, which restores a percentage of Cardigan’s max HP when activated. Judicious use of this Skill can make Cardigan a decent option for tanking enemy Casters despite her lack of RES, as she can shrug off their Arts with a self-heal and keep face-tanking for a while longer.

Cardigan runs into problems when facing strong enemies that hit harder than her HP pool can handle. Her self-heal is great for sustain, but it doesn’t increase her ability to mitigate damage. Lacking an E2 promotion also limits Cardigan’s ability to contribute in the long term, and at present she is not available from Recruitment, which makes her a little less accessible than her 3* ranking would suggest. Despite this, all Doctors should have at least two sturdy Defenders to form the backbone of their squad, and Cardigan is a good early choice for the job.

Better to use Spot if you need a Defender that can heal themselves.

Cardigan is a member of Reserve Op Team A4 and a citizen of Leithanien. Before taking up her current position, she was a member of the Bobsled Patrol Team. After an exceptional performance on her tests, she received permission to join Rhodes Island.

[Blood Crystal Density] 0.09u/L
Physical data reveal this Operator to be in a roughly healthy state.

Increase Trust to 50.
[Cardigan]
Cardigan is a proactive and confident Operator who carries out both daily tasks and combat missions with vigor. As a member of Reserve Op Team A4, Cardigan is very fond of all her teammates.

Increase Trust to 100.
[Cardigan's History 1]
Cardigan was born the oldest of five children in the frigid northern region of Leithanien to a mother and father who worked in the forests. Growing up in a comfortable and relaxed household, she had harmonious and intimate relationships with all her family members. When she was a child, she dreamed of becoming a professional skier. With her family's support, she took a shot at her dream, but ultimately failed to succeed. She quit ski training and was recruited by a bobsled patrol team. It was during this time that Cardigan underwent defensive and tactical training.

Increase Trust to 150.
[Cardigan's History 2]
Before she was recruited by Rhodes Island, she left her hometown, curious about city life. She made her way to the center of Leithanien to seek work, but due to its focus on Arts and her lack of talent for it, as well as her love of sport, she felt the city wasn't a good fit for her. During her stay in Leithanien, she met fellow travelers Steward and Adnachiel and formed a deep friendship with them. Even after the two of them became infected, Cardigan continued to put all her effort into helping her friends make it through, and contacted Rhodes Island to seek treatment for them.

Increase Trust to 200.
[Cardigan's...]
A list of broken items.
Sofa back leather 14 square centimeters. Cause of damage: Weapon wasn't unequipped and its edge cut everything up.
Medic Operator Ansel's office chair legs. Cause of damage: Got over-excited and lost balance. Chair legs bent as a result.
A 90*120cm tactics book. Cause of damage: Over-excitement resulted in book getting broken with a hammer.
Signature of person responsible: Cardigan. Signature of team leader: Melantha.
Outcome: After finance personnel calculate damage, they inform the responsible party that payment will be deducted from their salary in 12 equal installments for compensation. Responsible party has been handed over to team leader for Reserve Op Team discipline and re-education.

Stage Name: mem_ardign_1
Unlock: E1, Level 55
Description:
As a Defender Operator, Cardigan keeps a close eye on her own physical state during a battle. Using her strong self-recovery ability to cover an important point by herself is no sweat!
Cardigan's solid defense is enough to give wise commanders ample thinking time, employing nothing but trap items to toy with the enemy in the palm of your hand.