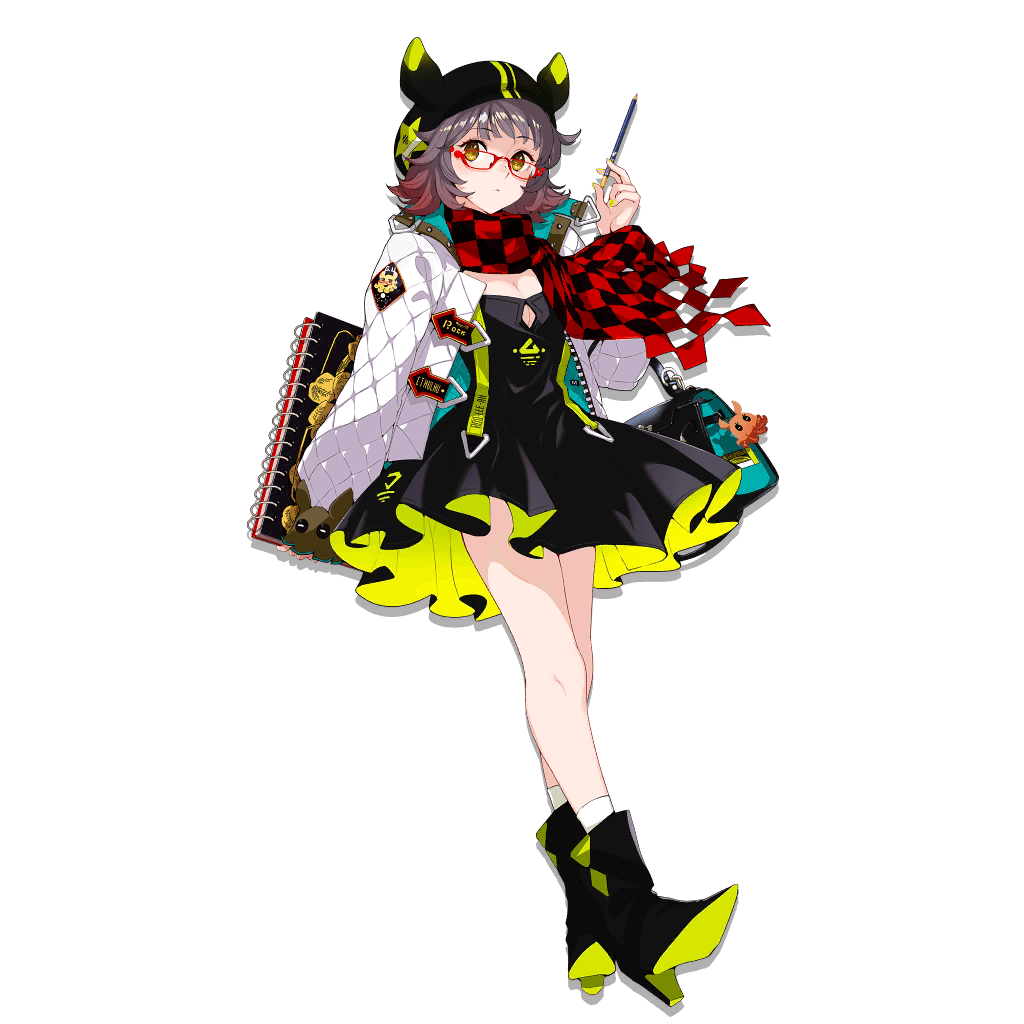 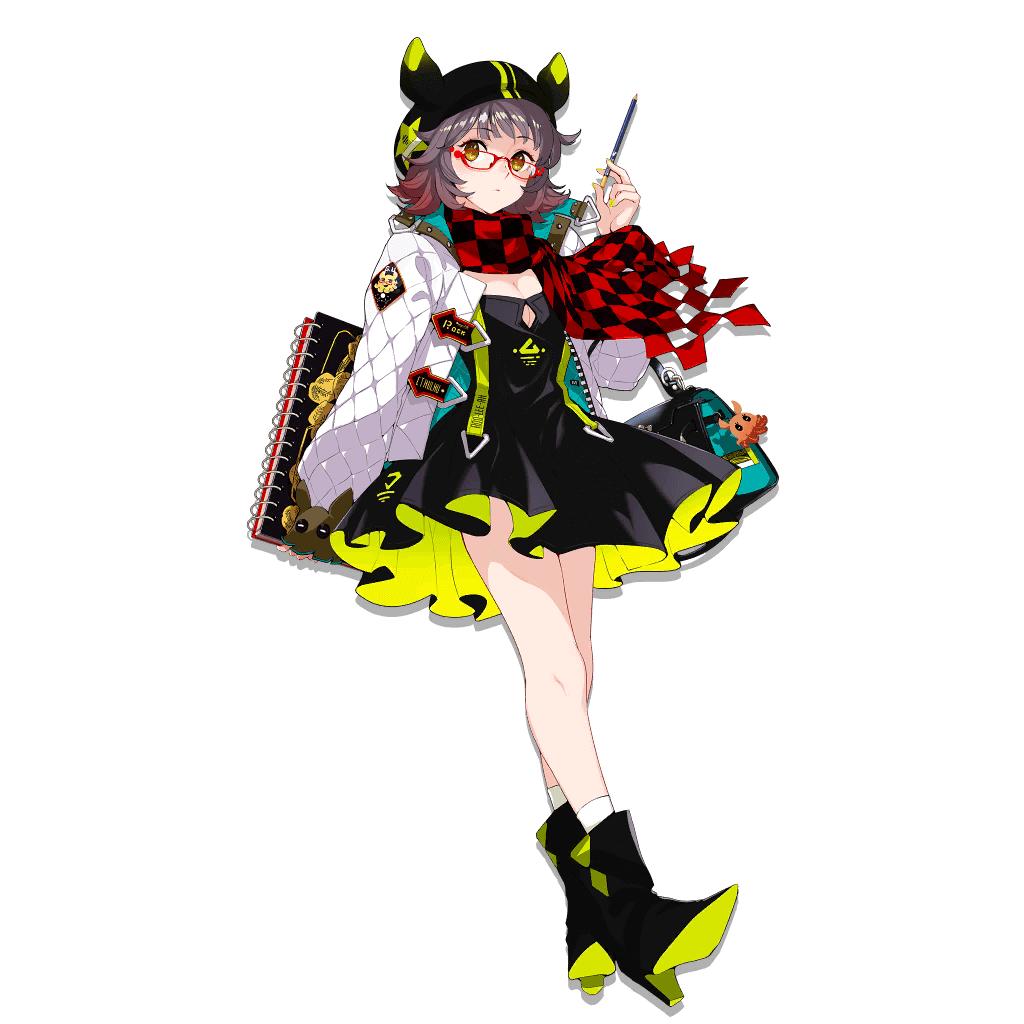 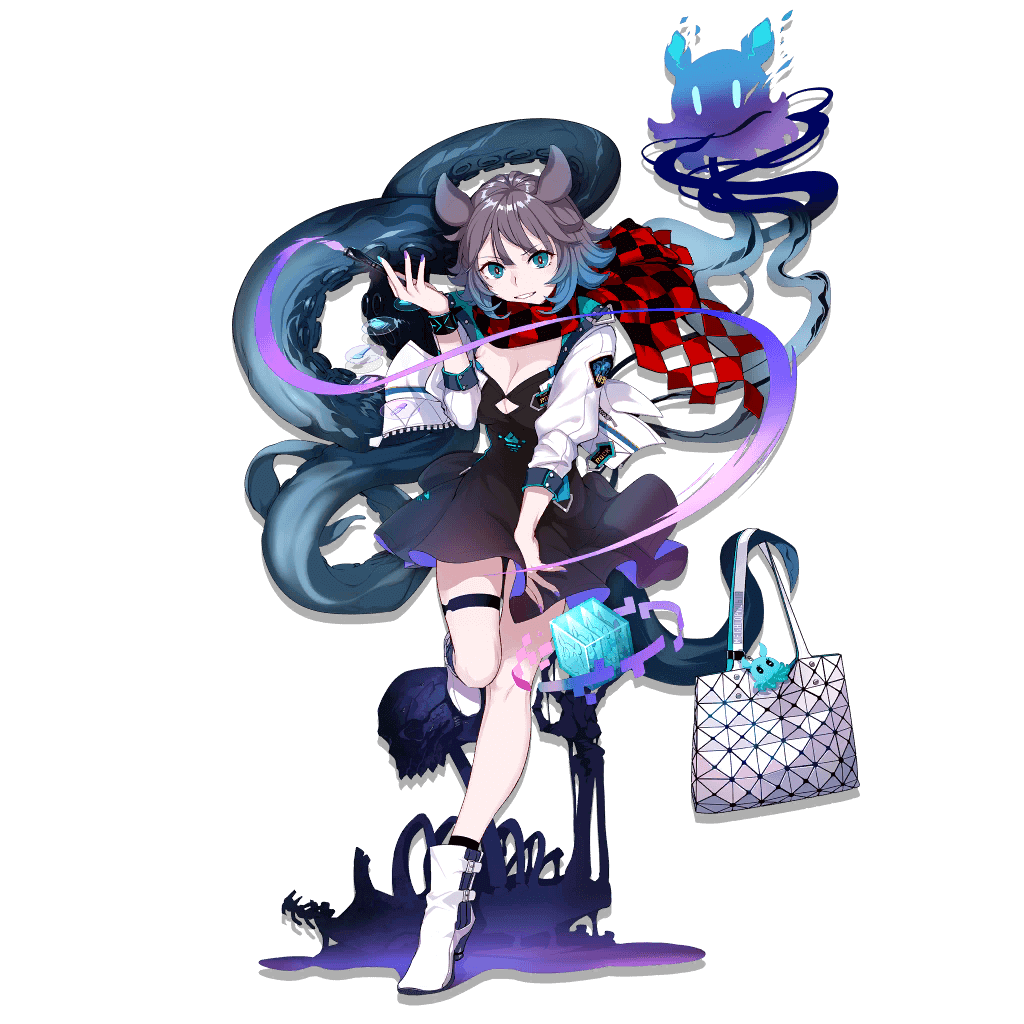 Deals Arts damage
Can use Summons in battles

Deepcolor, Supporter Operator of Rhodes Island, is ready for combat with her 'assistants.'

You don't want to know how she draws. 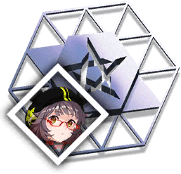 Deepcolor's Token A freehand fairy tale storybook. The main character, after traveling between life and death, finally steps into the river at the end.
Potentials

Can summon 2 Tentacles to help in combat
* Detailed information on Tentacles can be seen here.
Info
Tentacle Summoner
Lvl: 1

When this Operator is assigned to a Trading Post, order acquisition efficiency +20%
Focus β Lvl: 1

When this Operator is assigned to the Workshop to process any material, the production rate of byproduct increases by 60%


- Very squishy, especially before max Trust
- Tentacles count toward the Deploy Limit, which could be used for other Operators
- Cannot retreat and redeploy her Summons, unlike higher rarity Summoners.

“We artists are a unique breed... we get stuck at least thirty days a month and think everything we produce is garbage. Also, we only become inspired after midnight.”

Deepcolor comes from a wealthy family, holds three degrees, and was given the… unusual creatures that she summons in battle by her father, who captured them “somewhere in faraway Sargon.” At least, she claims these things are true; Rhodes Island’s investigations indicate them to be fishy at best. But she doesn’t have to lie about her prowess as a 4★ Summon Supporter Operator, which has been proven in the field time and again.

So what does she use her assistants to do? Primarily, Deepcolor is good at stalling. Her Skill 1, Shadow Tentacle, increases the ATK and DEF of all deployed tentacles and rapidly regenerates their health. Since Deepcolor can’t recall her tentacles, keeping them alive once deployed is important, and this Skill is perfect for the job. Her Skill 2, Visual Trap, expands Deepcolor’s attack range and gives all allies within that range (including tentacles) a massive Physical Dodge buff. This Skill lasts a very long time, but also has a very high SP cost, so be sure to save it for the toughest part of an encounter.

The damage potential of Deepcolor and her tentacle friends isn’t very high, which can make them feel underwhelming in comparison to more DPS-focused Summoners. Deepcolor herself is also a fairly weak unit, with low ATK and terrible durability. However, art is about persistence and creativity, not brute strength. With her powerful defensive Skills and her host of disposable meatshields, Deepcolor is perfect for keeping important Operators safe from harm and giving them some “wiggle room” while still chipping down incoming opponents.

Can't recycle her summons, so mistakes with her are punished pretty severely. Requires a lot of investment for a unit that doesn't offer much power.


Once considered a joke of a Summoner, Deepcolor has seen a significant revival thanks to her module. It gives her enough summons that for shorter maps (and most AK maps are short) she no longer has to worry about her inability to refresh them. This is especially valuable in the Roguelike mode where she can replace what Scene does at a much lower cost. I still wouldn't suggest that strategy, but many will want to try it anyway. Her S1 Masteries are fairly important to that end, though you may want to consider S2 as well for the team support on the later floors.

Explanation: Deepcolor's challenge as a Summoner is that she has no way to gain additional summons, nor any way to reclaim (recycle) summons she has already placed.  This Module helps that problem immensely by almost doubling her summon total (from 4 to 7).  This makes losing a summon or two far more forgiving and also massively enhances her solo coverage capabilities.  The deploy costs of summons are already cheap, so the decrease in their deploy cost from this Module (from 5 to 3) is nice but should rarely make any difference.

It should be noted, however,  that the Module doesn't completely address her core issue: she still can't generate more summons or recycle the existing ones.  This makes pre-planning with her very important, and it makes her a poor choice if many independent summon deployments are needed or if they need to be repositioned.

Deepcolor's origin is shrouded in mystery, with large gaps in her background missing. She is remarkably gifted in the use of Originium abilities, Arts support and combat coordination.
Deepcolor is currently a special ops Operator for Rhodes Island.

[Blood Originium-Crystal Density] 0.17u/L
According to Deepcolor's own statements, she often uses enriched Originium in the color palette of her paintings. As such, she has far more contact with Originium than most other Operators.

Increase Trust to 50.
Operator Deepcolor was born to an upper middle class family in Columbia, where her father was a professor of oil painting at the Schumann Art Institute of Leithanien. Through her father, she had access to all the greatest art salons, and was profoundly influenced by the scene from a very young age. Enamored of oil painting, she resolved to become an artist. Under the guidance of her father, Deepcolor quickly showed a tremendous talent for painting and she began her art studies and easily earned the grades to be accepted into Thyssen University, where she attracted the attention of a certain advanced Originium institute in Victoria, leading her to triple-major in Originium control. After graduation, she received an offer from the Harmenszoon Design Studio and worked there for almost three years.
Note: All of the above was provided by Deepcolor herself. Intelligence gathered from informants and confidential reports have revealed several inconsistencies in her account. It is advised to approach all background information provided by this Operator with skepticism.

Increase Trust to 100.
Operator Deepcolor is versed in different forms of art, though she is unable to utilize it in her role as an Operator. That is of course, except in her spare time, when she sketches quick portraits for her teammates. It has been confirmed that Deepcolor has a photographic memory of the appearance and detailed features of every Operator she has ever met. Through simple observation, she derives a complete picture of their bodies and even minute imperfections that the Operators themselves are not aware of. By further analyzing these data, Deepcolor can summarize her subjects' private information that most intelligence operatives would need long periods of observation to acquire, such as lifestyle choices and daily habits.
According to Deepcolor's personal account, this is nothing but a basic skill possessed by all painters, and she is still at the shoal of the sea of art.
Note 1: The sea she describes and the 'Deep' in her code name are strange concepts for some Operators. Please see it as 'boundless water.'
Note 2: After rejecting Deepcolor's request to paint a portrait of the creator of this file, the profiler still received a sketch from her.

Increase Trust to 150.
Operator Deepcolor's Originium abilities remain poorly understood, which is also a key reason why Rhodes Island recruited her.
The best guess at present is that Deepcolor's paintbrush acts as a wand or staff to other Casters, through which she channels her Originium powers. Her combat style isn't exactly orthodox--air-painting is not a known Artcasting method, nor is it easy to comprehend.
Furthermore, perhaps most difficult to understand are the creatures she commands, dubbed 'helpers' (or 'tentacles' by nosy Operators). The reason these long, thin threads are called 'creatures' is because they possess the intelligence and mobility of a pet trained to follow orders, greatly adding to Deepcolor's combat flexibility. After comparisons to the 'Meeboos' created by Mayer of the Rijn Life Research Center, these creatures are actually mechanical entities defying any existing classification. They have spindly bodies without noses, mouths, or ears.
According to Deepcolor's own reports, these creatures were captured by her father somewhere in faraway Sargon as a gift to her. She summed up the 'helpers' as merely 'as yet unclassified creatures.'

Increase Trust to 200.
One of Deepcolor's recent pieces:
Something no one would term tangible or structural, merely a pattern of different colors and layers on canvas. It forces onlookers to fixate only on the art, while comprehending a message conveyed by the rich, bright colors.
Prolonged staring generates unusual anxiety and a strong attraction to the artwork.