With his own buffing condition, the first ever time-regen Skill, and massive Force Strikes, Albert hits hard and cripples the boss both by Breaking it and weakening with Paralysis. 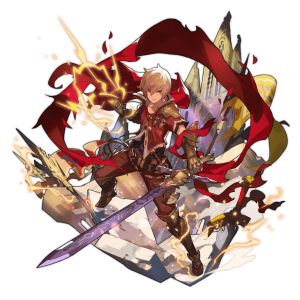 After starring in Granblue Fantasy, Shadowverse, and the Levin’s Champion Wyrmprint, Albert finally rolls into Dragalia Lost as a powerful 5★ Adventurer. With devastating Force Strikes and powerful Electrification buffs, he’s a force to be reckoned with. With Curse of Nihility invalidating many kits, Albert and his unique buffs have been allowed to shine, positioning him as a prime Sword choice for Dominion quests.

Albert comes with an unusual Skill which recharges gradually over the course of 40 seconds. While the guaranteed SP gain is reassuring, it makes for a strict rhythm of downtime. Regeneration doesn’t start again until the 15-20 seconds are up, meaning Albert is Electrified for about a third of the battle. Still, when the buff provides another 30% Strength, inflicts Paralysis, and enhances Lightning Burst, it’s a potent bonus.

Because Albert's Electrification is a unique buff, it is exempt from the Curse of Nihility debuff that nullifies so many other kits. Raw damage combined with fast breaks makes Albert a strong Sword option amidst a sea of Ryszardas and Mitsuhides.

A symptom of the above weakness, Albert's Paralysis is tied to his cyclical Electrification, so he prefers an ally like Mitsuhide to reliably apply the status.

Gala Reborn Jeanne needs no introduction; use her if you have her.

Gala Thor also has powerful dragon form burst damage but is not viable in Dominion quests.

Daikokuten is a solid pick if combo counts can be maintained.

Set 1: General purpose setup. Slot 5 can be replaced by any Crit Rate pick.

For both sets, A Game of Cat and Boar is highly recommended to increase Electrification uptime.