Ezelith has the Strength and speed to deal excellent sustained damage, debuff enemies with Brilliant Inferno, and provide a long window of iframes using Howling Meteor. For combat against smaller foes and minions, she still performs well with broad Dagger attacks and a spinning Force Strike. 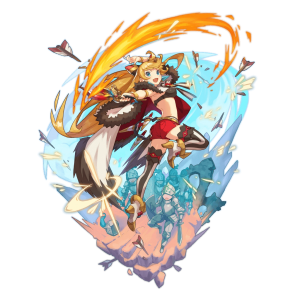 Ezelith is a Flame Dagger user and the very first featured 5★ Adventurer in Dragalia Lost. Refurbished with new toys from extended Mana Spirals, the Genius of the Century wields both speed and power, outputting consistent damage throughout the fight then closing out with Broken Punisher. By easily reaching 100% Crit Rate, Ezelith provides both heavy burst and debuffs that boost the entire team’s DPS while also enjoying long stretches of invincibility through Howling Meteor.

Howling Meteor has among the longest skill animations in the game, allowing Ezelith to maintain combo stacks without threat of knockbacks. The final leap also provides a brief moment of true invincibility, allowing her to dodge Purple marker attacks with proper timing.

Dagger users must rely on their mobility to cover their natural fragility, and Ezelith’s kit lacks any form of self-sustain. Furthermore, a mistimed Howling Meteor may lock Ezelith in place during a Purple marker attack.

Gala Mars: Mars is so good that no specialized dragon can compete with him for now.

Prometheus and High Brunhilda grant both damage and survivability.

Ifrit is both accessible and dependable.

Buff time is actually very relevant on Ezelith, as Inferno Mode is the crux of her kit.