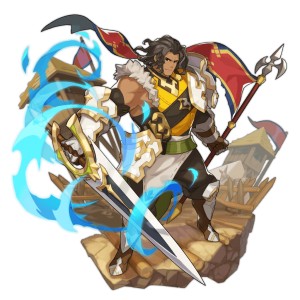 Ranzal is the latest addition to the Gala Dragalia lineup, forsaking his Axe to fight for his friends as Dragalia’s second Wind Sword user. In sharp contrast to Ku Hai’s high-risk Crit focus, Gala Ranzal’s kit is reliable and rock solid. Teamwide Defense buffs lessen the chip damage taken by melee adventurers while also benefiting Strength Doublebuff adventurers like Louise. His unique Gauge system fills naturally when attacking, enhancing both his survivability and damage without any hassle.

Ranzal enjoys both a teamwide DEF buff as well as increased DEF from his Gauges, allowing him to stay on the frontlines without fear. Ranzal’s massive Skill Damage boost is unconditional, meaning his power spikes revolve around his gauges instead of his health.

True to his classification, Ranzal’s new weapon sports the highest damage and Overdrive damage of all weapon classes, with the third highest SP gains to boot. Gale-Clad Sword also helps to mitigate the typical short reach of Sword users.

To contrast their power, Swords are lacking in both attack angles and maneuverability. Ranzal will find himself falling back on his multiple DEF buffs to compensate.

Midgardsormr Zero is the new industry standard by a decent margin

AC-011 Garland is a powerful option when damage is feasibly avoided.