Julietta is tailor-made for crowds with her Slayer bonus toolkit. Poison Res, Light typing, crowd control, and the wide-range Axe means she lives to clear mobs in Shadow IO. 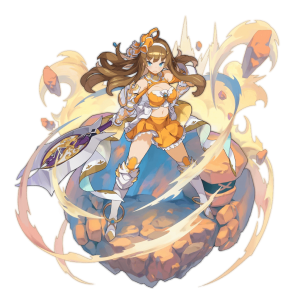 Timorous Paladyn Julietta started out as the only native 5★ Axe user in Dragalia Lost. Despite her faint-heartedness, she remains among the toughest Light characters with massive HP and an endurance-based kit. Glorious Guard and Last Recovery are huge survivability boosts, while the Axe Co-Ability keeps the entire party from walking on eggshells. Topping it all off is respectable multi-target damage boosted by Slayer’s Strength. Although lacking in flashy standout traits, Julietta strikes a healthy balance between the immortal Ryozen and glass cannon Lucretia.

Between Poison Res and multi-target damage, Julietta is the queen of Shadow IO and survival-based content such as Challenge Battles.

Although off-element play is very limited, Julietta’s neutral matchups with every enemy type make her extra versatile. Healing compatibility with Hildegarde and Vixel is also a huge plus.

The leisurely swing of Axes means Julietta’s DPS is less than that of similar high-tier Adventurers. This is a worthwhile tradeoff for such a tough character, but it's a disadvantage in timed battles.

Chapter 14 discussion (warning: spoilers)
Now that Chapter 14 has arrived, what are everyone’s thoughts on the chapter and on…
Best use for the free Tomes?
So we just got our hands on free tomes for Shared Skills today, 5 of them per element…
Are we allowed to plug our Discord
well if we are, you should join the white sparrows 2.0 Discord …
Where are the shared skill Tomes
Maybe I’m just an idiot but they don’t appear in any of the Treasure Trade menus…
Question about mana spirals
I took a few months off from DL and came back to find that mana spirals exist. My…
Read More