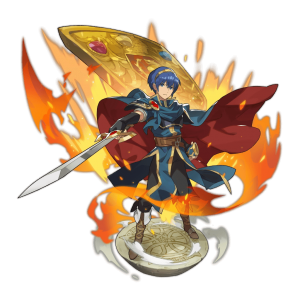 The Hero King himself makes an entrance in the Fire Emblem: Lost Heroes Showcase. His kit is nothing short of overloaded; Marth packs everything from Crit to self-sustain to party support. Blessed with Burn and a second charge of Last Boost via Mana Spirals, he's now poised to replace Euden in both High Midgardsormr's Trials and Volk runs. Featuring teamwide Skill Prep and attack rate boosts, Marth's toys are both unique and welcomed.

With Mana Spirals upgrading Flickering Flames to Lv. 4, Marth has officially drank the Fire meta's Burn Kool-Aid. Increases to attack speed are rare, and Marth is able to bestow them to his allies and thereby increase both their DPS and SP gains.

Like all Swordies, Marth lacks range and has relatively low mobility, although his self-sustain helps him eat the stray HMS spit.

Gala Mars: Use him if you got him.

Ifrit is an accessible budget pick for its 4★ rarity.

Standard Burn setup with an emphasis on Flurry bonuses.