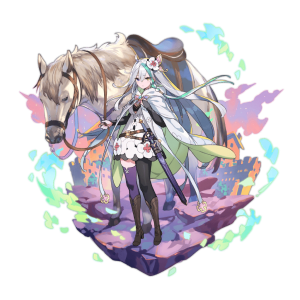 With one wing and two eye colors, Nino joins the roster as Wind’s first dragondrive adventurer (Gala Notte doesn’t quite count). On the surface, her kit appears rather plain without any outstanding utility, but this is offset by her titanic DPS potential. Similar to Bellina, Nino’s dragondrive Skill 1 completely resets itself when used, allowing for back-to-back-to-back multicasts (just remember to weave in some standard attacks/force strikes to keep her gauge up).

Nino is a fairly selfish pick who provides almost nothing but raw damage. Entire teams must be built around her since she lacks Poison, Stormlash, and dispel (all cornerstones of the Water endgame meta).

Bog lasts for an eternity but is completely resisted by several other top DPS picks. Getting bogged without Lowen support is especially crippling, as Nino can’t activate Dragondrive for the bog’s entire duration.

Gala Reborn Zephyr is still the strongest DPS pick by far even without its powerful active skill.

Vayu amplifies both of Nino’s damage skills with no strings attached.

Double Punisher loadout. If lacking either affliction, use the appropriate 5★ print (A Man Unchanging for Poison) and run Hastened Squall or Sniper’s Allure in the 4★ slot.