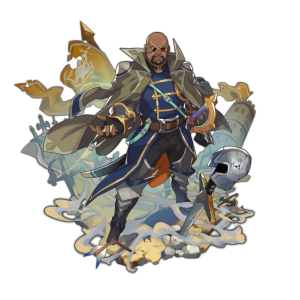 Victor arrives as the flagship of Windswept Warriors showcase and is Wind’s first 5★ Blade user. Easier to pilot than Addis, Victor cements himself as an offensive powerhouse by having Bleed readily available on his primary Skill. In addition to his top tier damage output, Victor comes chock full of teamwide defensive utility, most notably an immunity to knockbacks.

Victor’s Bleed is available right off the bat and isn’t reliant on using Skills in tandem. This makes hitting three stacks far less of a hassle compared to Addis’s kit.

Victor increases his team’s survivability with enhanced Water Res and a decent-sized %HP shield. Most important is the ability to grant teamwide knockback immunity, a boon previously exclusive to Julietta. Innate Buff Time extends this immunity to almost 20 seconds.

Despite many defensive safeguards, dipping below 70% takes a chunk out of Victor’s DPS.

Since knockback provides iframes and is a natural source of mistake forgiveness, removing this function may cause Victor or his teammates to unwittingly facetank damage they would have otherwise avoided.

Midgardsormr Zero is a powerful alternative is combo counts can be maintained.