Xander is a Force Striking machine wielding a Sword, enabling him to shred through the Overdrive bar and race towards Break state. Striker’s Strength bonuses are situational and ramp up in nature, but they (along with Stun Res) only further expand his capabilities to Imperial Onslaught and crowded quests. 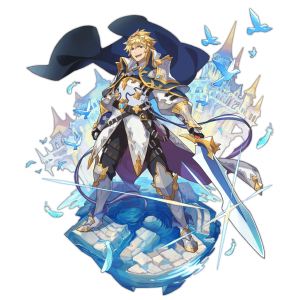 Xander is a 5★ Water Sword adventurer and the premier pick for clearing Imperial Onslaught (Flame) and Void Agni. His kit synergizes well with his weapon class, namely by plowing through enemies with enhanced Force Strikes and ramping up Slayer’s Strength over time. With the SP-charging Force Strikes and powerful AoE attack Skills, Xander is truly an offensive powerhouse, shredding both groups of enemies and bosses’ Overdrive Bars with ease.

To maintain balance with their advantages, Swords have neither the reach of Lances nor the agility of Daggers and Blades. As a result, Xander often ends up in vulnerable positions close to his targets.

Striker’s Strength is only applicable where there are lesser enemies to stack up on. Nevertheless, this doesn’t detract from his viability in single-target environments, as his Force Strikes still work to quickly Break bosses.

Gaibhne & Creidhne greatly increase the uptime of Xander's arsenal, slicing his SP costs by over a third.

Siren offers a drastic increase to Skill Damage alongside a modest Strength bonus. While this maximizes Xander's theoretical DPS when taking his damage Skills into account, the aforementioned Dragons are better choices for Xander if Force Strikes are a higher priority.

Leviathan is the premier choice for the greatest Strength bonus (40-60%) and access to Bog affliction. Dragonyule Jeanne is also a viable alternative that provides a trade-off between a lower raw Strength value and an increased Critical Rate bonus.

Vodyanoy is an accessible 4★ option that provides a solid 30-45% Strength boost, and is easily unbound with Moonlight Stones via the Void Battles Treasure Trade.

Pair 2: This set is designated for use in High Brunhilda's Trial, which provides Xander with full Burn Res.

Pair 3: This set is tailored for battles with waves of enemies, such as Imperial Onslaught (Flame) or Facility Events that are advantageous for Water Adventurers. Resounding Rendition is also a great option for the first slot, and other prints with Slayer's Strength or Striker's Strength, such as Together We Stand, are decent alternatives to The Heroes Arrive as well.